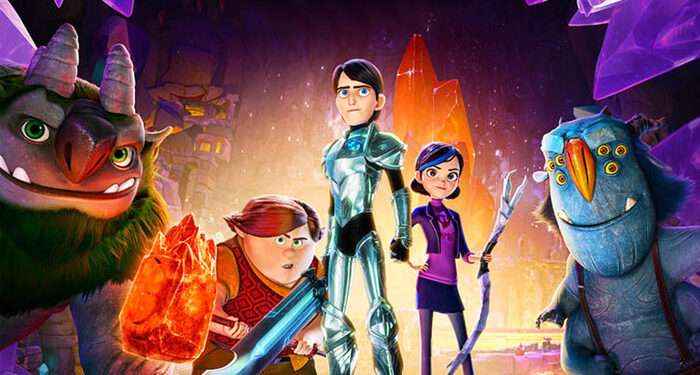 Guillermo del Toro (Pan’s Labyrinth, Hellboy: The Golden Army, The Strain) is most notably know for combining rich storytelling with strange, unique worlds and weird scary creatures designs. Most of his projects are focused more towards us adults. Imagine my surprise when I heard about his new kid-friendly project, Trollhunters. Finally, I would be able to introduce my daughter to the mind of del Toro. Netflix’s Trollhunters series is based on a book that del Toro co-wrote along with Daniel Kraus, and follows a 15-year old Jim Lake, who upon discovering an ancient amulet that transforms him into the armor-clad Trollhunter, becomes embroiled in the middle of an age-old battle between warring Troll factions.

It’s quite a familiar tale, a young kid finds out he is special and along with his tubby socially awkward side-kick they have to take on the forces of evil and at the same time navigate the challenges of being an everyday teen. What makes this tale so unique is the universe that del Toro creates along with the stunning creature designs that feel familiar yet gives us a fresh new take on Trolls and other creatures of myth. As with most of del Toro’s projects, the story focuses a lot of attention on the conflict that arises when the human world and the hidden mythical world collide. For a series aimed at kids, there is no question that del Toro’s stamp has been firmly placed on the project.

The world of Trollhunters is filled with all kinds of dangers that Jim, (who is expertly voiced by the late Anton Yelchin), and his best friend Toby, (voiced by Charlie Saxton) have to face. Luckily they don’t have to do it alone as they are accompanied by the always talkative and quite intelligent multi-eyed troll Blinky ( voiced by Kelsey Grammer) and the hulking troll with a huge heart AAARGGHH! (voiced by Fred Tatasciore) as they take on Bad trolls such as the terrifying Bular (voiced by Ron Perlman). Voice acting is top notch, and each actor’s voice complements their respective character and their design perfectly. Although there are quite a few funny moments throughout the season I did notice that the dialogue sometimes tended to be less witty than one would usually see from a Dreamworks animated series.

As can be expected from DreamWorks Animation, the studio behind great animated movies such as How to Train your Dragon and Kung Fu Panda, the animation is sleek and looks terrific. I constantly felt like I was watching a high budget animated movie created for the big screen. The environments are vivid and visually stunning, especially the neon-coloured troll market, and character animation is filled with kinetic emotion. While one the subject of environments, the way in which the show transitions between these feels seamless and never felt forced or jarring.  Of course focusing on the battle between good and evil one can expect quite a bit of action. Combat sequences are faced paced and interesting affairs as Jim squares-off against all manner of mythical creatures, from the pointy-headed gnomes to giant trolls. Each of these creatures is animated in such a way that their combat style and movement feel quite different from each other. It’s refreshing to see an animated TV series that not only focuses on the usual action set-pieces but also tries to create a rich story-driven experience that feels like it was created for the big screen.

Even though Trollhunters is billed as a kids series it is unmistakably a del Toro project, and as one can expect it does have some signature darker del Toro moments, some of which had my daughter hiding behind the couch. But it’s the rich narrative and interesting lore combined with the unique creature designs that make this series stand out from a sea of animated TV shows. Trollhunters is a beautifully animated series that had me and my daughter glued to our seats until the very last episode. Here’s hoping that we see more DreamWorks and del Toro projects in the near future.