How does the Note20 Ultra hold up against the Note20? Let's find out. 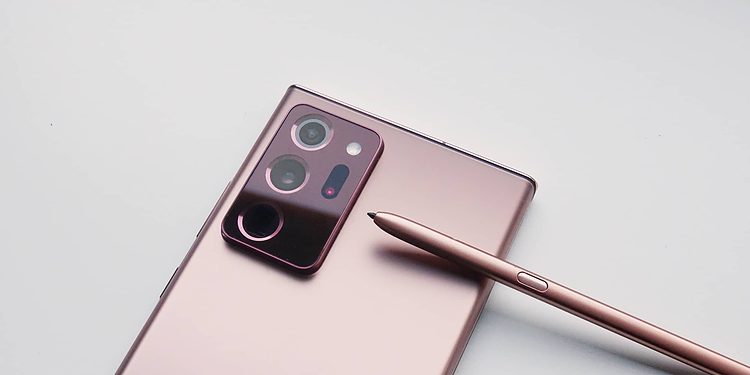 A few weeks ago, I had the privilege of some hands-on time with the Samsung Galaxy Note20. At the time of the review, I had written from a perspective of weighing costs against overall performance. These were the two main factors in the inevitable showdown between it and the pricier, Samsung Galaxy Note20 Ultra.

On paper, a few extra bells and whistles wasn’t expected to be enough to persuade otherwise. Add an extra lens to the camera and throwing in a few extras on the specifications. An initial price difference of R12,000 was a lot between the two devices after all. But, then, I spent two weeks with it. 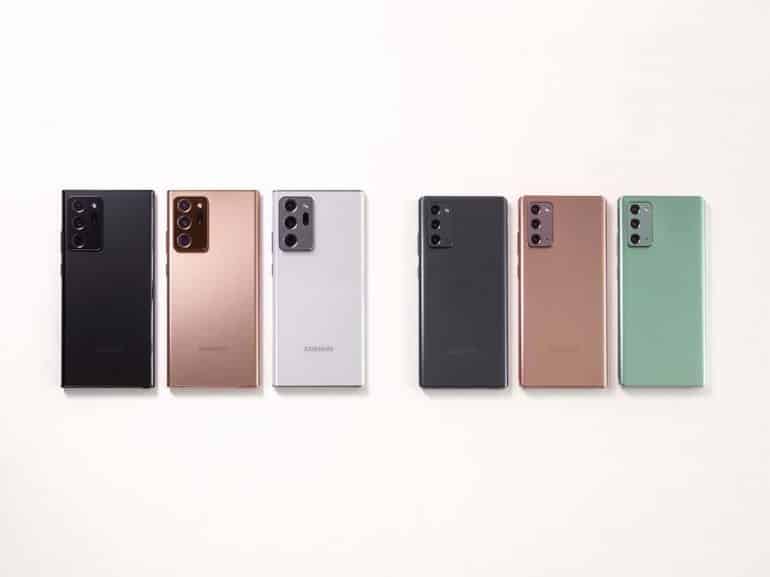 The first improvements over the Note20 is the design. Many would think that the two devices with the same product name would have the same design. Apart from the rectangular shape, the same majority smartphones, there’s quite a lot different when compared side by side.

The Samsung Galaxy Note20 Ultra has a more squared design. The four corners aren’t as round as on the Note20. The sides are also a lot squarer, even with the edgeless screen.

It also measured a fair bit larger at 164.8×77.2×8.1mm. That’s 3.2mm taller and 2mm wider. This also sees an increase in the overall screen size over any of the other units in the Note20 range. The Ultra is listed as being thinner than that of the Note20. But that doesn’t consider the camera housing.

One of the most notable differences between the two devices lies on the rear, with the camera. While the housing looks similar at first glance, you’ll soon realise that it’s not. The shape remains similar, but on the Samsung Galaxy Note20 Ultra, it’s taller, wider and thicker.

That large size of the device means you’ll need both hands to operate a lot of the day to day use. That’s not too much of an issue, as there are some features to assist with one-handed use for some apps and shortcuts.

Although I can’t attribute it to the difference between the two designs, but the Samsung Galaxy Note20 Ultra tucks the S Pen away much better. On the Note20, it sticks out a bit further than on the Ultra, which lies much more flush. 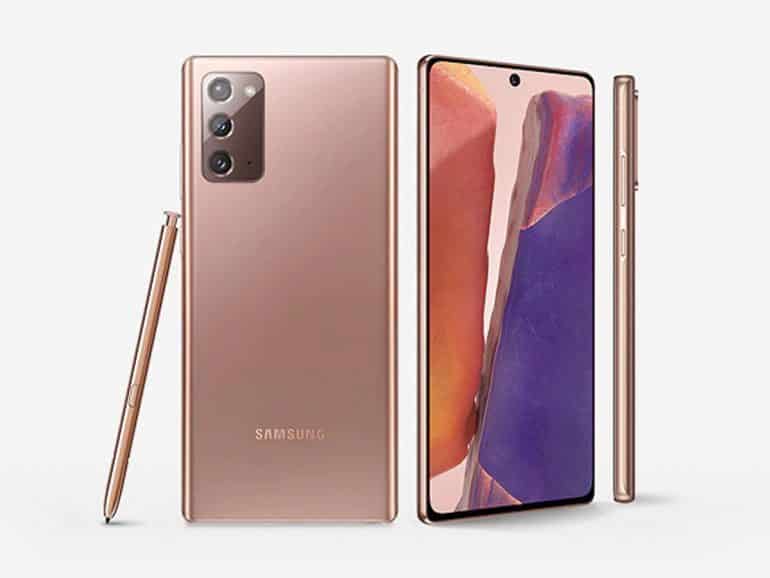 Where the two are really different is the build quality. For starters, the Note20 has a plastic rear covering. The screen also sports Corning’s Gorilla Glass 5 protection. The Samsung Galaxy Note20 Ultra is a lot more premium. The rear features a glass back. Both the front and rear glass panels have the latest Gorilla Glass Victus technology for the ultimate in screen protection.

The previous range of Note smartphones also included a glass finishing. However, it was very reflecting and prone to a lot of smudging. Samsung has somehow managed to address this issue by making it a lot more sleek-looking without being a fingerprint magnet.

To complete the premium aesthetic and feel, the unit has a single-piece, stainless steel frame. This not only makes it look more premium, but also keeps the weight down, despite the huge camera bolted on the rear.

Despite attempts to keep the weight down, the device weighs 208g. It’s one of the heaviest Samsung smartphones to date. But that’s not too much of an issue. The larger screen and camera are significant contributors to this. But you wouldn’t want to compromise on those two elements on account of a few grams. 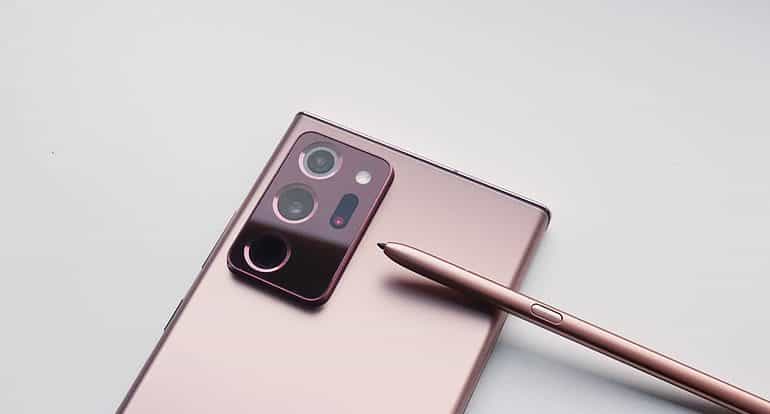 As mentioned previously, the Samsung Galaxy Note20 Ultra has slightly higher dimensions. This is as a result of its larger screen. It measures in at 6.9”. It may not seem like much on paper at just 0.2” over the Note20, but it’s visible when compared side by side.

To compare the rest of the specifications of the Ultra to the standard Note20 is not a fair one. For a better comparison, you’ll have to look at the Samsung Galaxy S20 Ultra smartphone. Both units feature the Dynamic AMOLED 2X panel, with support for 120Hz and HDR10+.

The unit produces over 660 nits of brightness. It’s not the brightest – the likes of Apple’s iPhone 11 achieving scores over 700 – but it’s still very good. In terms of colour reproduction, it measures 121.5% and 201.2% of the sRGB colour gamut, in Natural Mode and Vivid Mode, respectively.

Samsung’s flagship smartphones have always featured some of the world’s best screens. The Samsung Galaxy Note20 Ultra is no different. Where it ekes a bit of an advantage over the S20 Ultra is the use of Corning Gorilla Glass Victus.

As already mentioned previously, it is a lot less reflective with less fingerprint smudges, which makes standard visibility better over the course of the day. 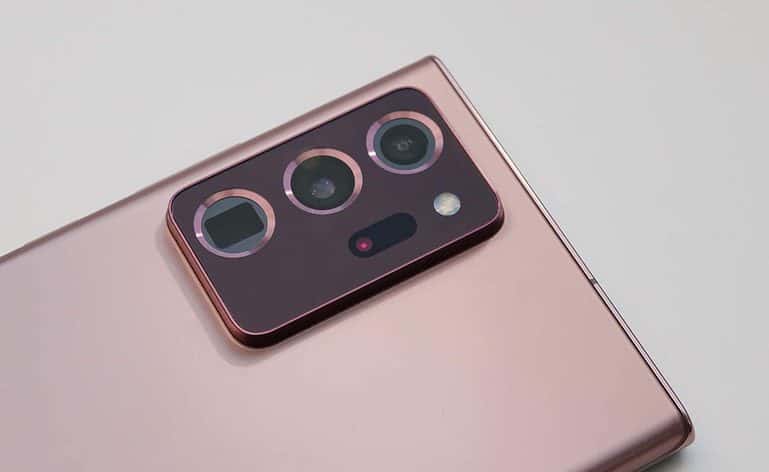 As a result, performances are relatively similar to that on the Note20 benchmarks and power tests. I would have assumed the slightly larger screen would reduce these performances, even just a tad, but the screen seems to be a lot more efficient at consumption, creating better results for both performance benchmarks and battery life.

Samsung has switched the cooling systems within its range of Galaxy smartphones. Instead of the standard copper piping, it features a new, multi-layered graphite thermal padding. This is supposed to dissipate heat over a larger area to keep it cooler.

There have been a few stories that popped up about complaints regarding overheating issues. During my testing, there were no notable heat concerns during normal workloads. I did, however, note some increased warmth under heavy loads such as stress testing and benchmarking. But this is to be expected.

Where it did concern me at times is when using the camera for long periods of time. The device would quickly heat up after just a few snaps. That said, it never got much hotter than that, despite my concerns. The heat remained equal until I stopped utilising the camera and it would then return to normal operating temperatures.

The Samsung Galaxy Note20 Ultra sports a 4500mAh, non-removable, Li-Ion battery. That’s 200mAh more than on the Note20. But not as large as that fitted on the S20 Ultra launched earlier in the year.

With the increased screen size, I initially assumed that the additional mAh would be used up to power those extra pixels on the screen and when utilising the higher-powered camera. On paper, then, it would seem that it would even itself out to reach similar results of the Note20 during the course of an average day.

I was wrong. But a good wrong. The Ultra has a better battery life than that of the standard version. Under normal loads, the smartphone could power through into a second day of usage. Irrespective of the apps you use during this time, you could easily still manage a full day with some still some charge remaining at the end.

Going out to an event for the first time after a self-imposed stricter lockdown, I took quite a number of photos. Having previously charged my phone first thing in the morning, I was still able to call an Uber with 50% battery life after hours of photography and video capture. 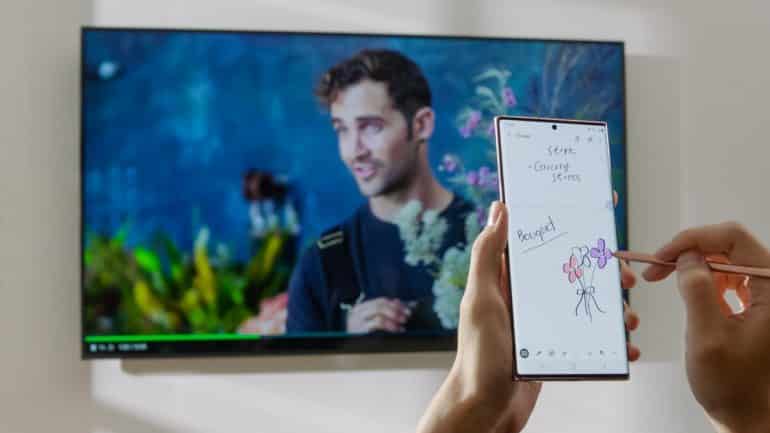 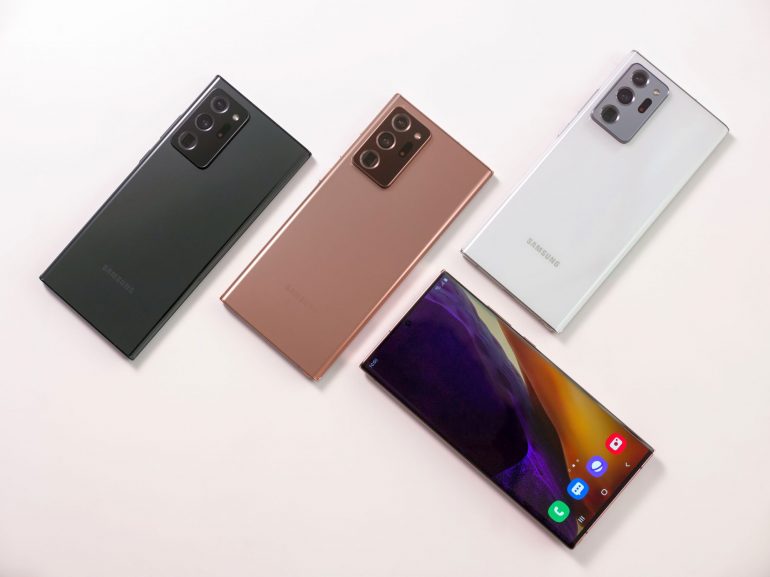 There’s a lot to love about modern smartphone cameras. Adding multiple lenses to the rear of a flagship smartphone adds new features and great possibilities for shots. It may not yet be able to compete with high-end full-body cameras, but having the support for three of four lenses on the back your daily driver is the game-changer.

Even with the higher costs of modern smartphones, it’s still a more affordable option than buying a mid to high-end full-body camera with the addition of a set of lenses to achieve the same effects. This is the appeal.

On the rear of Samsung Galaxy Note20 Ultra sits three lenses within its camera. The main lens features a 108MP wide camera with f/1.8 aperture. This is paired with a 12MP ultra-wide camera, which has a 120° field of view and f/2.2 aperture. The last of these is another 12MP telephoto lens, which sports 5x optical zoom capabilities, as well as 50x super-resolution zoom.

The three cameras are enclosed in the housing alongside a flash and a new, laser auto-focus sensor. While the S20 Ultra is listed as a quad-lens camera configuration, the fourth camera is that of the TOF

The 5x optical zoom is great. Moving to 10x and 20x is very good, but utilises a mix of optical and digital blending. Moving to 50x zoom and things become quite a bit blurrier. The 100x zoom, while nice, never produced any images you’d use for your social media posts. At 50x zoom, it’s a lot more acceptable.

The primary 108MP camera is not really going to do justice on its own on a phone. Once the image has been taken, it’s much better to copy it onto your PC to start editing. Here, cropping images still have a very high resolution. It’s not exactly a zoom capability as with the previously mentioned, but sort of acts that way. I much prefer using the 108MP lens to capture scenes and spend some time with post edits to zoom in on an area and having much better results.

Samsung has revised its approach to throwing lenses at the camera setup and hoping for better results. Overall, I’d say that the results on the Samsung Galaxy Note20 Ultra are better than that on the S20 Ultra. There are still some notable smoothing and filters added to images when captured, but the colour reproduction and quality are great.

In low-light scenes, there are still some cameras that produce better images. But I’ve never been one to take too many scenes in low-light conditions. Where it really comes alive, however, is in those ultra-low-light scenes. These include images of stars at night in the suburbs and the likes. On many occasions, I could point at the night sky, take an image and pick up some stars that I wasn’t able to see myself.

At an initial list price of R36,999, the Samsung Galaxy Note20 Ultra would be a tough sell. Even with the improved build, 5G, better camera and additional features thrown in, it’s hard to justify the R12,000 price gap over the standard version. With the recent price drops, however, it’s a much easier proposition. While it still may be a bit on the expensive side, the value for money increases quite significantly.

While there may not be such a thing as a perfect smartphone – most of which is based on personal preference – in my book, the Samsung Galaxy Note20 Ultra comes pretty close. I will have to address my previous Note20 review, though.

At its initial list price, the Samsung Galaxy Note20 Ultra would be a hard sell under any circumstance. The recent price drops, however, makes it much more appealing. One thing is for certain, irrespective of costs, is that the Note20 Ultra is a great smartphone.