The game about stacking wooden blocks has been around since the ’70s when it was first created. Over the years, Jenga has gained a large following as each new generation gets introduced to the family-friendly fun. And while the game has a surprisingly humble beginning, it’s become one of the most popular games currently on the market.

I remember being introduced to Jenga as a kid and spending a whole weekend playing it. Since then I’ve introduced my own daughters to the game, who have developed an appreciation for the skills involved in playing this deceptively simple game. With Winter upon us, it seems like the perfect time to stay inside and play games.

Here, we’ve put together a list of fun facts about Jenga.

It Started in Africa

Jenga was first developed in the 1970’s by game designer Leslie Scott, who was the co-founder of Oxford Games Ltd. Scott and her family first used wooden blocks purchased from a local sawmill in Ghana as the base for what we now know as Jenga.

After realising that this stacking game could appeal to more people than just herself and her family, Scott decided to introduce the game, now known as Jenga, to the public at the London Toy Fair in 1983. And the rest, as they say, is history.

Jenga is not a made-up word

Believe it or not, the word Jenga is not just another made up word chosen because it sounds awesome. The word ‘jenga’ is actually derived from the Swahili word ‘kujenga’, which means ‘to build’. It was chosen because of the game’s African origins and because the game tasks you with building a tower of wooden blocks. Contrary to popular belief, the blocks the game uses are not expertly milled to make sure each is identical. To help add even more challenge to the game of Jenga (as if it isn’t challenging enough), each of the wooden blocks (which are usually one fifth as thick as their length) are created with small random variations in size that help add an additional challenge to the game.

This means that some of the blocks may be a tad shorter or thinner than others, which creates imperfections in the stacking process and in turn helps make your perfect tower just a little more unstable. These imperfections were even introduced in the mobile version of the game.

The original game developed by Scott started out with 48 blocks but she decided to change this number to 54. Scott has mentioned that she has no idea why she decided this but that she just knew it would work. Interestingly enough, one of her favourite numbers was 18 which 54 is a multiple of, which could have helped her make the choice to add 6 more blocks. How tall can you go?

With Jenga being all about stacking, what is the highest tower of Jenga ever stacked, you might ask? The record for the highest known tower is 40 complete stories with two blocks into the 41st, which was stacked by Robert Grebler all the way back in 1985. Those are some big blocks

One of the biggest Jenga games on record was played by using two CAT excavators (and with some help from a spotter). The tower consisted of only 27 wooden blocks but considering that each weighed roughly 600 pounds each it’s quite an accomplishment. As can be expected, the best part was watching these hefty blocks come tumbling down in the end. You definitely don’t want those blocks coming down on you. 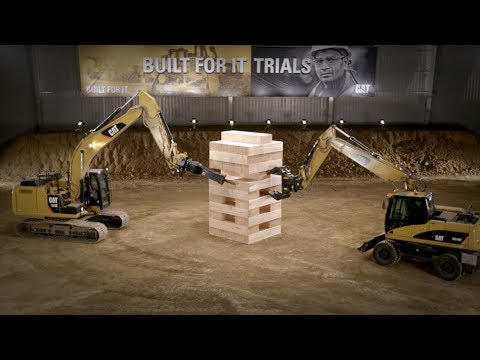 With Jenga consisting of nothing more than a few wooden blocks and gravity, there is quite a lot it can teach us about structural engineering. The same forces that buildings are vulnerable to such as loads, tension and compression are the same forces Jenga blocks have to contend with during each game. The same thoughtfulness that goes into building a tower of Jenga is used when constructing or designing a full-sized building. Of course, there is nothing better than “simulating” an earthquake and watching your tower come tumbling down. So many to choose from

Over the years the game has been revised and reinvented with many new versions that put a unique twist on the classic game. These versions include Jenga Xtreme (note the use of the ‘X’ which makes it even more extreme) and Ultimate. There has even been mobile and Nintendo Wii versions of the game released. While all of these different versions offer players their own unique experiences we still prefer the good old version that started it all.

Jenga is sold by Hasbro and can be bought at your local toy retailer.