Splendor: Marvel Review – A Classic Board Game With A Marvel Twist

byDeville Louw
in Board Games, Toys 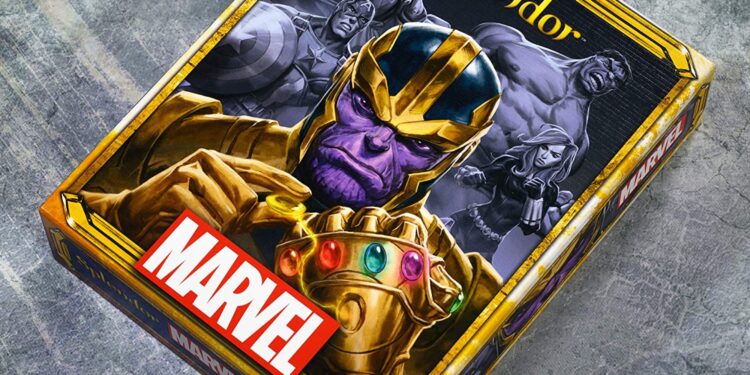 The original Splendor was a game that quickly became a classic and a must-play on most board gaming nights. So, how do you improve on a classic? Well, you add a dash of the Marvel Universe, of course. Enter Splendor: Marvel, a game that sees you battle against your friends in a race to get all the Infinity Stones. 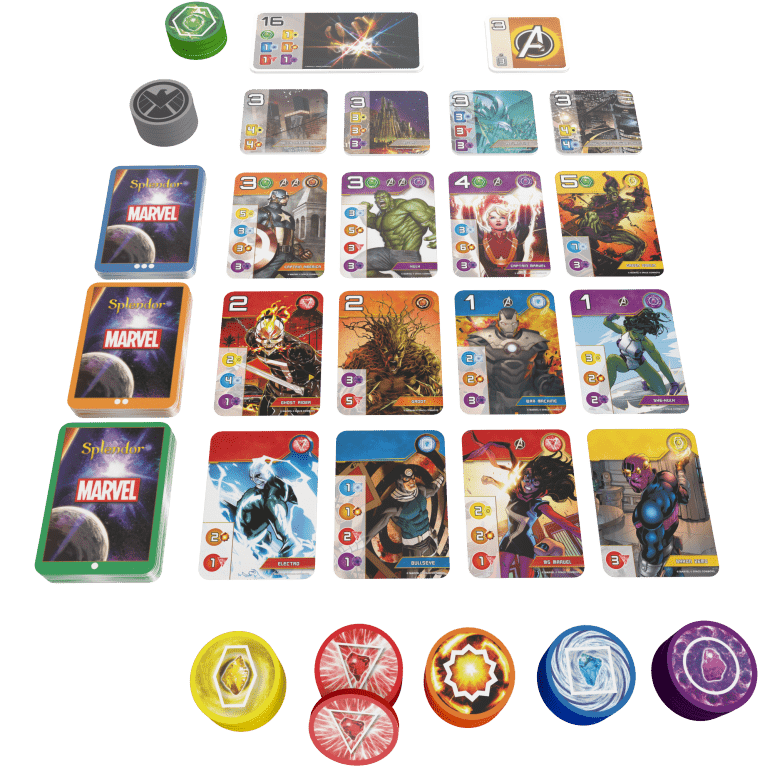 Based on the original board game, Splendor: Marvel consists of Marvel-themed versions of the original’s components.

There are 39 Infinity Stone Tokens, which basically are different coloured poker chips. The chips have a nice weight to them, which makes them quite sturdy.

The same can’t be said for the 90 hero and villain cards, however. While they are adorned with gorgeous artwork, they do feel a bit thin. What I do appreciate is that the cards each feature a unique hero or villain from Marvel lore, with no reprints or doubles. There are even some superheroes that only hardcore Marvel fans might be familiar with, which is a nice bit of fan service. How do you play Splendor: Marvel?

As with the original, the goal of Splendor: Marvel is to collect cards that count towards both points and resources. These are then used to fulfil the end game condition, which is to collect one of each resource and have 16 points in total.

The game is set up by shuffling the coloured decks and placing them in the middle of the play area.

These decks are numbered with power levels from 1 to 3. The top four cards from each deck are placed face up and form part of the ‘market’.

Based on the player count, the Infinity Stone chips are placed on the table along with location cards, which are randomly chosen.

During each turn, players will be able to perform just one action. The action can be one of the following: This sounds quite easy, but the challenge comes in when one realises that there is a finite amount of chips available, which is only replenished once players purchase cards.

Cards also have Infinity Stone icons on them, this means that the next time a player buys a card they can pay one less of the associated stones/chips. This makes planning ahead critical in the game.

Then there is the new Avengers tile, which is given to the player with the most cards with the Avengers icons on them. This tile continually moves around the table.

The location cards also count towards a player’s points total and can be purchased or won by fulfilling their requirements (basically, having the number of coloured cards available as indicated on the card).

To trigger the end game condition, one player must have one of each of the Infinity stones and a point total of more than 16. This then triggers the last round, after which the player with the most points wins.

Now, this all might sound daunting at first, but it only takes one or two playthroughs before most people I played with started to grasp the intricacies of the game.

It boils down to using your chips and card resources to try and collect the most points before the end game is triggered. What did we think of the game?

First things first, although the Marvel theme is a welcome one and adds a lot more flavour to the Splendor formula than the original, at its core, the game remains one that is centred around getting points by collecting sets of cards. That is not to say that the gorgeous art and themed tokens do not add anything to the game. On the contrary, as someone who owned the original, this has now become my favourite version of the game.

It is obvious that a lot of care and attention went into the theme especially when considering the number of unique heroes and villain cards that are included, as well as the overall quality of the components.

It took a few playthroughs before we started to realise all the strategies available to us, which made the game much more enjoyable. This is definitely a game that gets more fun the more you play. It is also a game that rewards planning and strategic thinking, with very little left to luck.

The Marvel theme will definitely help Splendor find a wider audience. And, if you love board games, it’s really worth a try.

For more information on Splendor: Marvel, visit solarpop.co.za. The game retails for around R1000 locally.

Splendor: Marvel is a fun board game that rewards planning and strategic thinking.