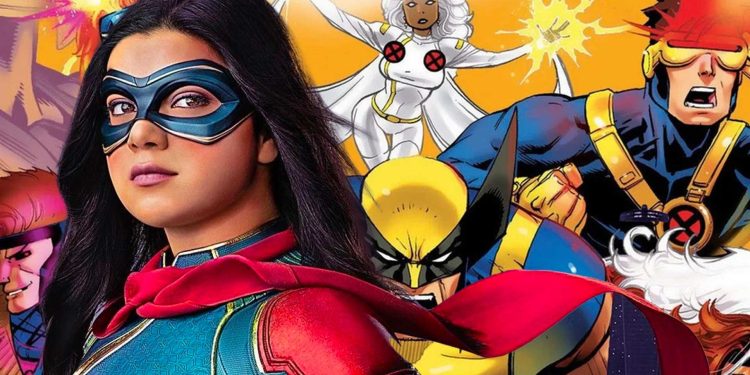 The Ms. Marvel debut episode was jam-packed with Marvel Cinematic Universe Easter eggs with the introduction of AvengerCon and was meant to have even more that hinted at the X-Men.

Ms. Marvel saw the introduction of AvengerCon for its first episode, which was an in-universe fan convention for diehard Avengers fans from all over the world, and is arguably one of the best sequences in the Disney+ series. The excitement surrounding the convention is only headlined by the main character’s (Iman Vellani’s Kamala Khan aka Ms. Marvel) own excitement.

The in-universe AvengerCon sequence was so well received by fans that Disney released an official website for the convention that allows viewers to take a closer look at the monumental MCU event.

Executive producer Bisha K. Ali revealed some of the scrapped cameos that were meant to appear at AvengerCon like Korg and a certain ‘winged horse’ like Valkyrie’s Pegasus.

Now that Ms. Marvel has concluded, for the time being, the concept artist for the series, Shae Shaz shared new promotional art from the development of the Disney+ series that featured an unexpected easter egg that ties the hero to the X-Men.

The official concept art featured scenes from the AvengerCon sequence that included a cosplayer dressed as Cyclops from the X-Men in the background.

The costume that the cosplayer was wearing appears to resemble what Cyclops wore in Uncanny X-Men #500. Whether knowingly done or not, it is interesting that the artist chose Cyclops as the X-Men cameo, as in the comics he became a close ally of Kamala’s.

After the Civil War II in the comics, Kamala, Spider-Man, and Nova separated from the Avengers to form their team called the Champions. In this new time, Kamala finds a time-displaced version of Cyclops and the two form a strong attachment with one another, cementing a compelling connection to the mutants. If this was done purposefully, it’s an amazing easter egg to the introduction of more mutants into the MCU. If done accidentally, what an awesome coincidence.

Another image shows that a Stormtrooper was almost featured in the AvengerCon, so it begs the question of ‘Was this an Easter egg, or was this just the concept artist including other Marvel characters and Intellectual Property in the art?’

When Will Marvel Finally Introduce the X-Men?

The end of Ms. Marvel’s latest season insinuated her existence as a mutant and was the first hint of the X-Men franchise in the MCU since its re-acquisition by Disney. The reason the concept art didn’t make it to fans before now may be that Marvel didn’t want too many questions being raised before the explosive revelation that was Kamala’s mutant DNA.

It is still unknown exactly when the mutants and X-Men will make their entry into the Marvel Cinematic Universe, however, Kamala’s discovery opens the door for the entire franchise, although it’s such a minute discovery for her. It’s unlikely that mutants will be joining the MCU during the Multiverse Saga, so fans have a good couple of years before we might see the next glimpse of the X-Men.

What are your thoughts on the Ms Marvel X-Men Easter egg?