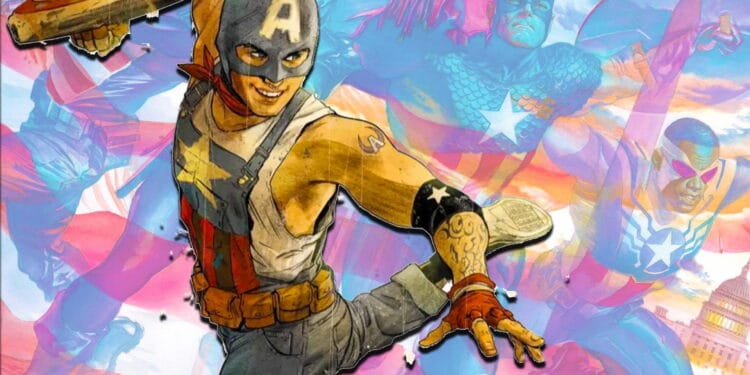 This Pride Month, Marvel Comics will be introducing the first gay teen to pick up the mantle of Captain America in the comic books 80-year history: Aaron Fischer.

Aaron Fischer will be featured in a comic book miniseries titled The United States of Captain America which will follow Steve Rogers (the original Cap) as he teams up with former Captain Americas (Bucky Barnes, Sam Wilson, and John Walker) on a journey across the USA as they attempt to locate his stolen shield.

Throughout their passage, the four heroes will meet everyday people from all walks of life who have chosen to take up the mantle of Captain America in order to defend their communities. One of these everyday heroes is Fischer (also known as the Captain America of the Railways), a fearless teen who has stepped up to protect fellow runaways and the unhoused.

The United States of Captain America

The United States of Captain America is written by Christopher Cantwell (Doctor Doom) with art by Dale Eaglesham (Fantastic Four).

Each issue of the series will feature various creative teams who will help introduce new characters in the Captain America role. Fischer will be the first new Captain America to appear in the series and will be written by Aaron Trujillo (Dodge City) and drawn by Jan Bazaldua (X-Force), who co-created the character.

Jan Bazaldua shared how special it was for her as a trans person to be a part of introducing an “openly gay” Captain America for the series. Bazuldua said, “I really enjoyed designing him, and as a transgender person, I am happy to be able to present an openly gay person who admires Captain America and fights against evil to help those who are almost invisible to society.”

Josh Trujillo shared that the character is inspired by everyday heroes of the queer community who are pushing for a better life. Trujillo further stated, “He stands for the oppressed and the forgotten. I hope his debut story resonates with readers and helps inspire the next generation of heroes.”

The United States of Captain America series sets out to highlight how everyday people (like me and you) can also be heroes. The first issue goes on sale on June 2 and to honour Pride Month, Fischer will be the first new Captain America to debut in the upcoming series. Thereafter each issue will introduce another individual who has been inspired to continue the legacy of the original Captain America in their own capacity.

What are your thoughts on Marvel’s newest and first gay Captain America, Aaron Fischer? Are you excited to read the first issue?