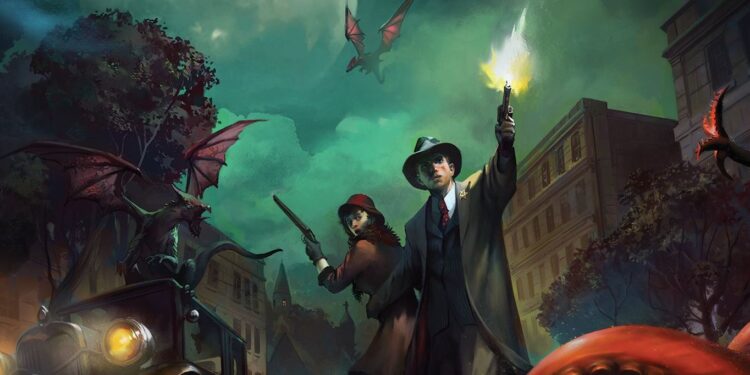 It’s the 1920’s and Massachusetts has been beset by strange creatures. Appearing only at night, they seem to drive those who see them insane. It’s up to you (and your partner) to discover what the heck is going on, even if it means having to face the unknown horrors head-on. If this sounds remotely interesting to you then Arkham Horror: The Card Game might just be the game for you.

Arkham Horror: The Card Game is a more focused, condensed version of the Arkham board games, giving players the same type of experience over a shorter playtime.

Being a card game, the game box comes packed with loads of cards. Each card is adorned with the classic art that we’ve seen in many of the board games, such as Eldritch Horror. The quality of the cards, as with most Fantasy Flight game components, is fantastic. The artwork adds to the feeling of being in the 1920s.

As we’ve come to expect from the creators, Arkham Horror: The Card Game also comes with loads and loads (and loads) of cardboard tokens. These tokens represent various things such as health and sanity clues, just to name a few. Again, these are thick and sturdy tokens.

Then there is the little bag you get from which you will be drawing these tokens during tests.

You get a very helpful rulebook and a book that contains the base game’s narrative. This book sets out each scenario for the players and helps set the tone for the adventure that lies ahead.

It might sound like the box doesn’t contain much but, trust us, the game is much deeper than it is initially suggested.

Arkham Horror: The Card Game sees you (and a team of investigators) trying to solve a mystery before the time runs out. It’s a basic mechanic, but one that evolves as players play the game. You’ll be visiting various places, gathering clues, and fighting off nightmarish creatures.

Now, imagine trying to combine Arkham Horror the board game with a card game and you’ll get an idea of how the game will function.

Fair warning though, for a card game, Arkham Horror: The Card Game takes quite a bit of time to set up. This is mainly due to the various tokens and decks players will be using. It all depends on where in the game’s narrative they currently are. Each player decides which of the characters they want to play as and take their corresponding deck of cards. This deck includes abilities, items and different helpful nick-knacks. They can be customised but it is advised that players use the standard deck for their first playthrough.

After this, the location cards are set up, along with the tokens that players will be using and specific scenarios’ Act and Agenda decks.

In essence, the object of the game is to get through the scenario’s Act deck before the Agenda deck runs out.

Each round in Arkham Horror: The Card Game consists of four phases:

The Mythos phase (is skipped during the first round) – This is where each investigator draws an encounter card that can bring enemies into play or have other nefarious effects.

The Investigator phase – Each investigator can take up to three actions, of which there are many to choose from.

The Enemy phase – This is when the monster you’ll be facing attacks and moves.

The Upkeep phase – This is when everything is reset in preparation for the next round.

As mentioned, during their turn, players can take up to three actions. These actions include; looking for clues, fighting or evading monsters, moving around the available locations and getting resources.

Most of the game’s actions involve some sort of skill test. Whether you are chucking a stick of dynamite towards a foe or searching for that all-important clue. Most of these boil down to drawing a token from the bag, and seeing how that token affects your character’s skill. For instance, if your character has a 3 strength and draws a -1 token that means that their strength is reduced to 2. If they required a strength value of more than 2 to complete a task they end up failing. This is akin to rolling dice and adds a level of luck to the game.

Player’s will then be rummaging around the various locations, getting clues and hopefully fulfilling the scenario conditions. One of my favourite aspects of Arkham Horror: The Card Game is that, even if you lose a scenario, the game doesn’t just end. Instead, it continues with the loss affecting certain aspects of the next scenario. This means that the game continues to evolve depending on the outcome of your game.

What did we think of Arkham Horror: The Card Game?

Arkham Horror: The Card Game takes the essence of what the board games are known for and condenses it down into a card game. What this means is that you’ll be getting a similar experience, just in a much shorter playtime. For those who have been wanting to experience an Arkham game but just didn’t have the time to sit through hours of play, this is a great starting point.

For better or worse, being an LCG (living card game) means that you’ll be able to expand your Arkham Horror: The Card Game experience by purchasing even more expansions.

Sure, the game can be a bit daunting to learn initially but, thanks to a clearly laid out rulebook and introduction scenario, once you grasp the game’s mechanics, you’ll be solving mysteries in no time.

Arkham Horror: The Card Game takes some of the best aspects of the Arkham Board games and condenses them into one surprising good card game.