There was a time when vampires didn’t sparkle in daylight or give interviews to Christian Slater. They were the menacing undead who were best avoided – Dracula in particular. In the case of the 1922 vampire film Nosferatu, that was especially true.

The film cribbed the tale of Dracula, changing the names of the characters to avoid lawsuits. That plan failed, and a lawsuit was filed by Bram Stoker’s estate after the film’s release. As a result, all copies of the film were ordered destroyed.

However, one copy survived. That sole print was reproduced again and again, moving down through the generations, and over the years it’s become a cult classic. But is the classic vampire movie Nosferatu (1922) really any good? 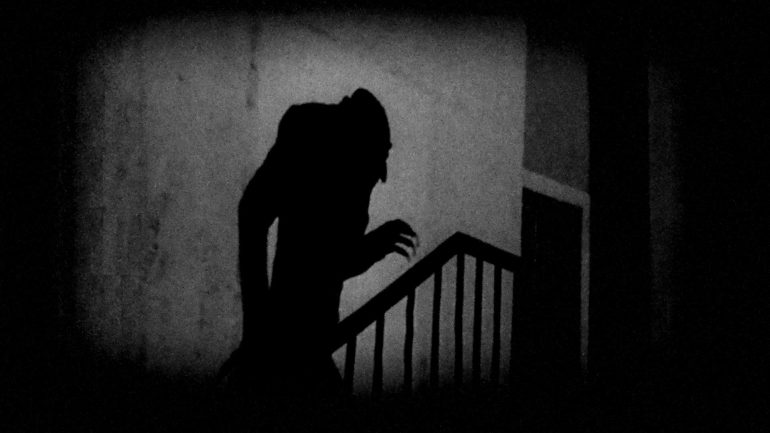 Thomas Hutter is a real go-getter of an estate agent, so full of enthusiasm that he resembles a manic version of Emmet from The Lego Movie. His boss Knock is (literally) insanely happy because the wealthy Count Orlok wants to buy a home nearby – meaning a fat commission. Hutter needs to leave his wife and go on a business trip to get the Count’s signature on the dotted line, with an obligatory pit-stop on the way where the locals advise him not to continue. In classic horror movie fashion, he ignores them and embarks on a frightful coach journey to Orlok’s castle.

Orlok turns out to be genuinely creepy. For instance, while at dinner, Hutter cuts his thumb and the Count tries to suck it for him. Is it fine dining etiquette, a disturbing omen of danger to come, or a disturbing fetish? It doesn’t matter, Hutter wants none of it. However, when he wakes up the next morning his neck bears the now-familiar puncture marks. While business-wise the Count signs the papers, the real-estate agent suspects his client is a vampire. Before long, coffins are getting shipped to the new homestead, the Count sets sail from Carpathia to Germany, and our hero is trapped back at the castle.

On Orlok’s trip, the sailors experience the typical Dracula joyride experience of rats and “plague”, and are all dead by the time the boat docks. The townsfolk investigate this weirdness, while Orlok skimps out on hiring a moving van by carrying his coffin home personally. The town’s body-count rises, the locals believe there’s an epidemic of, well, epidemic proportions, but who’s going to save them? Hutter is in pieces, his boss Knock is in a mental asylum, so it’s down to Hutter’s wife Ellen to get the job done… 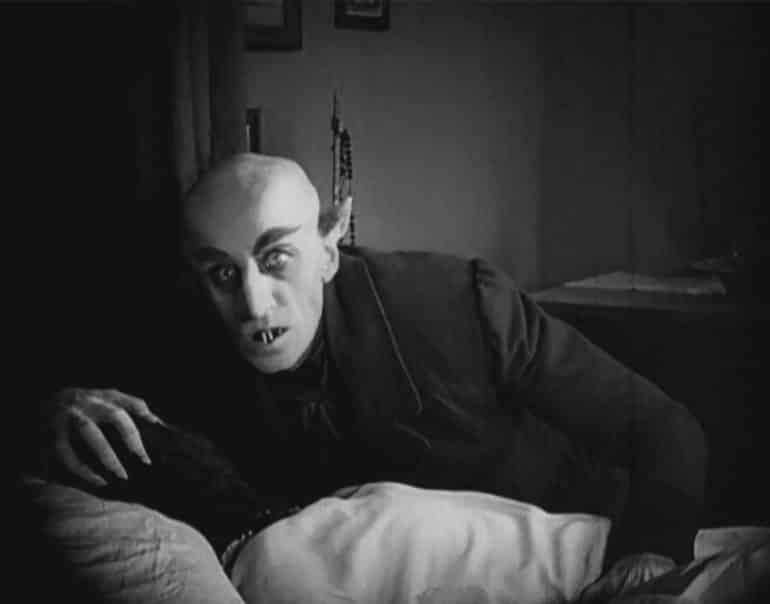 Yes, the plot of Nosferatu (1922) is almost identical to Stoker’s Dracula. Only the names are changed and the ending altered. For this film, Dracula became Count Orlok, Harker became Hutter, Mina became Ellen, and so on.

These days, owing to some changes in copyright and the fact that this film shouldn’t exist at all, some copies are modified with some of the dialogue cards changed and the names are altered again… so Hutter is called Harker, Ellen is Mina and… and you’ve got to wonder why people would bother screwing around with a classic. However, Count Orlok is still Count Orlok even in those versions, and the alterations don’t change the story or the quality of work in this case.

In terms of the original Dracula story, Nosferatu (1922) keeps most of the significant points but jettisons several of the secondary characters and the whole of the last act. Instead of a thrilling carriage-ride race against the setting sun there’s a hurried conclusion. So much so that when The End flashes up you’re left thinking, “What?! That’s IT?!”. Then again, the same can be said for the Tod Browning 1931 film with Bela Lugosi too. In terms of artistic merit though, it’s stunningly filmed and highly inventive despite the limitations of the time and the production. Being an old silent horror/vampire movie, Nosferatu (1922) won’t appeal to everyone. Some of the performances are incredibly over-the-top, but they had to be. It was the early days of film and they had to physically make up for the lack of sound. The film isn’t particularly scary in any way either.

But Max Schreck as Count Orlok… that man really had it.

He’s creepy and disturbing, while his performance is like the film: moody and so effective that the impact stays with you. Like the film, while he may not have the razzle-dazzle of more modern versions, he’s the classic you can’t ignore.

Of all vampire films, Nosferatu (1922) was the first and it’s a legendary piece of filmmaking. It may lack the gloss of more modern films, but it can’t be ignored. 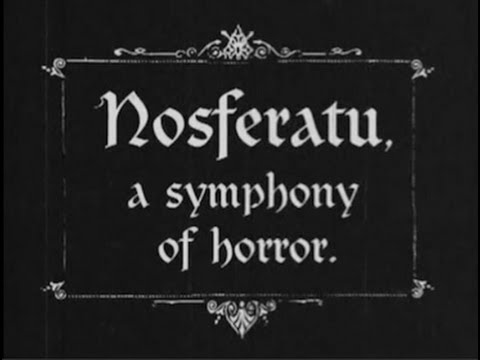