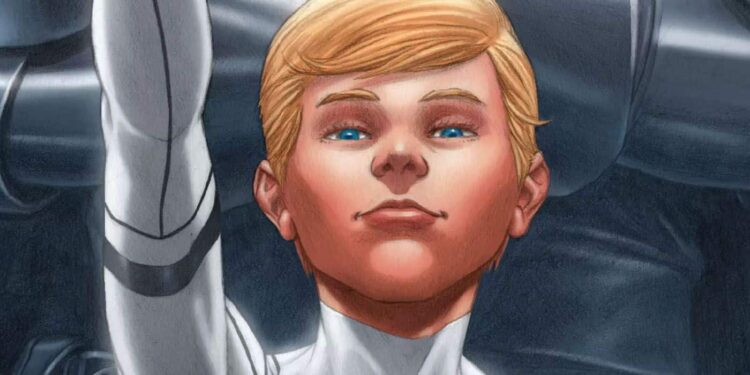 In Mark Waid’s History of the Marvel Universe #3, Marvel has finally officially revealed who the most powerful mutant in the universe is. And no it’s not Wolverine, Jean Grey or Professor X. It’s Franklin Richards.

The revelation comes from Galactus, who should be considered a reliable source considering his cosmic awareness. It seems the Devourer of Worlds believes that Franklin Richards, a mutant beyond Omega-Level, deserves the honour of being titled the most powerful mutant of all time.

Of course, this shouldn’t come as a big surprise to comic book fans. Franklin Richards has long been considered one of the most powerful characters in the Marvel universe.

Over the years, several cosmic entities, including Galactus, Eternity, Infinity, Omniversal Guardian Roma and Omniversal Majestrix Opal Luna Saturnyne, have described Richards as a “being whom the Celestials felt was on par with themselves” and the most powerful mutant of all time.

The son of Mister Fantastic (Dr. Reed Richards) and the Invisible Woman (Susan Storm) of the Fantastic Four (also made up of his uncle, Johnny Storm aka The Human Torch and Ben Grimm aka The Thing), Franklin Richards, who grows up to join the X-Men, possesses the power to warp reality and make his thoughts come to fruition. Created by Stan Lee and Jack Kirby, the character first appeared in Fantastic Four Annual #6 way back in November 1968.

Unlike Scarlet Witch, Franklin Richards’ powers manifested when he was very young and continued to grow at an incredible rate. Over the years, he has managed to create entire universes and protect Earth from cosmic threats. There are even some fans who are convinced that Franklin Richards actually controls the entirety of the Marvel Universe.

So there you have it. Hopefully, we can now all agree and end the debate once and for all. Franklin Richards is the most powerful mutant in the Marvel Universe.

The History of the Marvel Universe #3 series chronicles the history of the Marvel worlds, from the Big Bang to the twilight of existence, attempting to answer some of the important questions fans have had over the years. The final issue (#6) was released on December 18, 2019.

Unfortunately, it seems that Franklin Richards has lost the title of Marvel’s most powerful mutant. In the recent FF run by Dan Slott, R.B. Silva, Jesus Aburov and VC’s Joe Caramagna, Franklin Richards’ powers are mysteriously declining. Even with Mister Fantastic, Doctor Doom and the X-Men looking into it, it remains unclear why he is growing weaker.

Plus, in Fantastic Four #26, they’ve discovered that Franklin Richards isn’t even a mutant after all. Even though, an X-Men/Fantastic Four comic by Chip Zdarsky and Terry Dodson reveals that his powers evolved from an X-gene, making him a mutant. It’s complicated.

It appears that when he was younger Richards somehow used his cosmic reality-altering abilities to unknowingly alter his cells to produce the X-Gene.

And after using up all his powers in a recent fight against the Cormorant, the former Omega-Level mutant is now a normal human being. Of course, this results in him being forced to leave Krakoa and Professor X not allowing him on the island.

It’s an unusual plot, but there’s still a good chance that Franklin Richards regains all his powers in future comics.

Who is Marvel’s Franklin Richards?

In Marvel Comics, there’s no shortage of characters that seem to break every established rule in the Superhero Multiverse. Among the list of the most prominent reality-breaking characters, there’s one that has gained notoriety among comic readers. Franklin Richards.

The son of Reed Richards and Sue Storm, this young hero is one that has had an amazing but complicated run in comics. With unending questions concerning his arrival in the Marvel Cinematic Universe, it’s time to explore Franklin’s résumé and see what makes him so special.

While it may seem like Franklin only arrived in recent years, he has actually been around for over 80% of the Fantastic Four’s publication history. Created by Stan Lee and Jack Kirby in 1968, he showed up just 7 years after the debut of his Superhero family.

As a member of Marvel’s first family, Franklin’s arrival was a big deal that led to some intense events around the universe. While Sue was pregnant with him, she suffered some cosmic impulses of living energy within her blood, endangering herself and an unborn Franklin. To save his unborn son, the rest of the team travelled to the Negative Zone and stole the Cosmic Control Rod from Annihilus, the conqueror of that dimension. After the successful heist, they were able to use the rod to reduce the cosmic power in Sue’s blood, ensuring safe delivery.

Over time, we’ve seen a few variations of Franklin Richards pop up with different names and ages. He has appeared as a toddler, 8-year-old, 12-year-old and more in non-chronological storylines. He also has alter egos including Avatar, an older version of himself he became after getting frustrated with a puzzle as a child.

In another event, a teenage Franklin adopted the name Psi-Lord after receiving training from his grandfather who whisked him into the future.

Typically, the presence of an older, future Franklin is one that writers enjoy, so we’ve seen that idea make multiple appearances thanks to his reality-warping abilities. It is a classic staple of his character in a similar vein to Trunks from the Dragon Ball series. Eventually, Franklin used his powers to age himself into adulthood within a very brief space of time.

Franklin has a twin sister, Valeria, who does not have his extravagant abilities, but instead possesses a superior level of intellect that rivals their father’s. Her story is also pretty amazing and a lot less convoluted compared to Franklin’s.

In his early years, the sorceress Agatha Harkness acted as Franklin’s nanny and protector.

What Powers Does He Have?

With a complicated birth like that, it’s easy to assume that his powers are due to the cosmic rod that was used on him as an infant. For a while, that was the case, but comic book continuity can often be retconned and in the current canon explanation, he inherited his abilities from his parent’s charged genes thanks to their cosmic rays.

Franklin Richards possesses psionic abilities, allowing him to use abilities like telepathy and telekinesis. However, the real kicker is his reality manipulation, an ability that allows him to disregard the laws of physics and do almost anything.

In a similar vein to the Scarlet Witch, he is capable of rewriting events in reality. For a good number of his appearances, Franklin is just a kid, so his powers have a drawback that is attached to how much energy they drain from him as well as his limited control.

Perhaps one of the stories that propped up Franklin’s popularity, Jonathan Hickman’s Fantastic Four run showed just how powerful Franklin really is. There are many more mind-blowing feats from Franklin, but we will cover the ones from this comic series to keep this introduction in sync.

He Created Pocket Dimensions As A Kid

In issue #574, we see an older Franklin appear from the future to awaken his younger self’s abilities, training him to create pocket dimensions and master his powers at a younger age. All this was apparently aimed at ensuring that the younger Franklin would be able to avoid the death of Reed in the future. In actuality, it was so that the older Franklin could absorb his power and defeat a group of mad celestials.

He Can Trivialize Black Bolt

During his quest, we see the older Franklin use his abilities to create an impenetrable wall between himself and Black Bolt, allowing the latter to speak freely within. In Marvel Comics, this is a pretty huge deal as a character like Black Bolt is always respected on the power scale in terms of his abilities. Seeing Franklin effortlessly trivialize Black Bolt’s trump card and withstand his voice was amazing to witness.

In fact, Franklin Richards is so powerful that he defeated Ultron while still in diapers as a baby… and a coma.

He Made Galactus His Herald

On a flashier note, Franklin Richards was able to literally punch and defeat a Celestial.

An astonishing panel to see, the cosmic being with incomprehensive levels of power was reduced to a simple defeat. In that same battle on issue #604, Franklin used his younger self’s powers to revive a deceased Galactus and utilize him as his own Herald in order to defeat a group of Mad Celestials.

In the events of the comic, the Celestials made a comment on Franklin’s prowess, observing that he was in fact beyond Omega classification. For context, powerful characters like Jean Gray with the phoenix force and the Scarlet Witch are considered to be Omega-level mutants.

After the events of the Galactus battle, Franklin and his herald develop a bond between one another, forged by their shared understanding of just how much power they hold. As equals attached to the power cosmic, they knew the true extent of their immortality, binding them to a fate where they would have to face the heat death of the universe. For Galactus, this was a gift as he would not need to face this event alone.

This event was actually played out thanks to the 2019 “History of the Marvel Universe” series by Mark Waid and Javier Rodriguez. In this series, conversations between Franklin and Galactus at the end of time are a focal point. They serve as a storytelling device with two friends reminiscing on the world as it comes to an end.