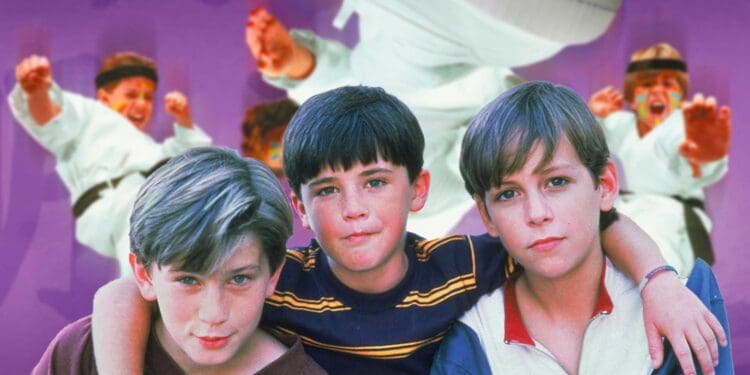 It’s been 30 years since the release of the original film. Is it time for a 3 Ninjas reboot film or TV series?

The 1990s were a very different time when it came to family entertainment. While superhero and animated films remain as popular as they ever were, there was a peculiar movie sub-genre that swept the box office: action or adventure flicks starring a ragtag group of kids. Movies like The Sandlot and The Little Rascals revival were modest successes that could be used as the perfect example of what this genre was all about. However, one of the most prominent franchises that tick all the boxes of this genre is the 3 Ninjas saga.

The first 3 Ninjas came out in 1992. Directed by Jon Turteltaub, the movie follows three kids (Michael Treanor, Max Elliott Slade, Chad Power) who train in the arts of ninjutsu with their grandfather (Victor Wong). After the kids’ father — who is an FBI agent — gets involved with one of the world’s most dangerous criminal masterminds, it will be up to the boys to stop the evil ninjas that threaten their family, learning the importance of family along the way.

3 Ninjas is a case example of taking all things popular in your generation’s culture and condensing them into a single, easily-digestible feature film. You got ninjas — which were huge in the 80s and 90s — “rad” kids who use surfer lingo, and action flick shenanigans like undercover FBI agents and stolen nuclear warheads.

Like so many action flicks of the time, 3 Ninjas wasn’t particularly successful with critics. Some reviews thought that the movie suffered an “identity crisis,” as it never settled on being either an adventure flick or a straight comedy.

Mixed critical reception notwithstanding, 3 Ninjas somehow managed to spawn three other sequels that spanned the better part of the 90s. The first of said continuations came in 1994 when 3 Ninjas Kick Back was released. However, as straightforward as they might sound, there’s actually quite a bit of complexity when we talk about the chronology of the 3 Ninjas franchise.

Kick Back was released as the first sequel to the original film — but it was never meant to be the second film in the series, chronologically speaking. The sequel to the first movie is actually 3 Ninjas Knuckle Up. This flick was shot back to back with the first film in the series, and is the only other 3 Ninjas movie that features the original cast. However, due to some distribution shenanigans, Knuckle Up wound up being released in 1995, after what was supposed to be the third entry in the franchise, 3 Ninjas Kick Back.

That’s it for the original trilogy. However, things don’t end there for the three ninja brothers, as they would have to join forces one last time in the dreadfully disappointing 3 Ninjas: High Noon at Mega Mountain.

High Noon and the End of the 3 Ninjas

Let’s address the elephant in the room before we move on: High Noon at Mega Mountain might be solely responsible for the demise of the entire 3 Ninjas IP. While none of the movies in the original trilogy could be considered a cinematic masterpiece by any stretch of the imagination, the fourth entry in the series took things into a zanier, and undeniably worse, direction.

From the very beginning, High Noon at Mega Mountain appeared destined for failure. Released in 1998, the main appeal of the flick was having Hulk Hogan along with the titular three ninjas. However, by the late 1990s, Hogan’s popularity was already in a steep decline, leaving the film disconnected from the young audience it was targeting in the first place.

Additionally, ninjas in general just weren’t considered as cool as they were in the 80s and early 90s: gritty sci-fi aesthetics reigned supreme at the turn of the millennium, and there just was no place left for lighthearted films like 3 Ninjas among the young masses.

However, as we all know, Hollywood is an industry that thrives on reusing and repackaging ideas. Could we be on the verge of a 3 Ninjas revival? Well, stranger things have happened — literally.

On July 15, 2016, Netflix released the first season of a new horror show — a series that drew heavy inspiration from some classic Stephen King stories and was filled to the brim with eighties nostalgia. Stranger Things would quickly become one of the platform’s most successful original programs, sparking an immediate interest in similar stories.

The following year, in 2017, a reboot of Stephen King’s It was released, becoming one of the most commercially-successful horror movies of all time. The movie was clearly inspired by Stranger Things’ success, going as far as casting one of the show’s lead stars in a starring role.

The point is that there’s a renewed interest in Goonies-style adventure films starring a cast of young actors at the moment. Sure, it seems like Marvel has an iron grip at the box office at the moment, but the law of diminishing returns seems to finally be setting in for the MCU.

Also worth keeping in mind is that, as time moves forwards, the nostalgia for earlier decades keeps changing. A few years back, the eighties revival was all the rage, but lately, we’ve seen a renewed interest in the nineties in a ton of different movies and shows. The Fresh Prince of Bel-Air revival and the Friends reunion are proof that the 90s are back in full force, and cheesy franchises like 3 Ninjas are no doubt a beloved part of someone’s childhood, which would inevitably lead to some form of reboot or spiritual successor of some sort.

The lack of news about a possible 3 Ninjas reboot should keep fans’ expectations tame. Unlike some other major nineties blockbusters, there’s been very little fuzz about this franchise in recent years, if any.

Modernizing the 3 Ninjas formula would also be a serious undertaking for any filmmaker that feels up for the task. Back in 1992, movies, especially family flicks, had a distinct lightheartedness that’s almost impossible to emulate nowadays without making it seem overly cheesy. A “modernized” version of the 3 Ninjas would have to be made to comply with kids’ modern expectations, and ninjas still aren’t as cool as they were in the nineties.

Without the Power Rangers or the Teenage Mutant Ninja Turtles around anymore, the success of a 3 Ninjas reboot in 2022 sounds dubious at best. However, fringe stories of remakes coming out of nowhere and making a huge splash at the box office are not unheard of. It will just take a lot of talented filmmaking and a whole lot of goodwill to salvage the franchise after the shocking end that High Noon at Mega Mountain brought upon its fans. Let’s just keep Hulk Hogan far away from the 3 Ninjas reboot and we should be good to go.