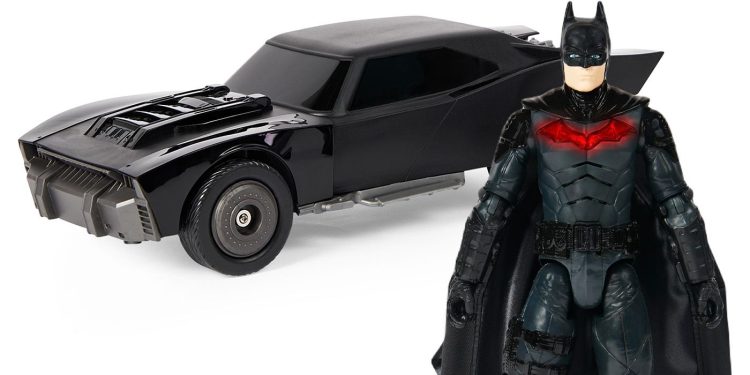 Even though you have seen The Batman on the big screen and in the comfort of your own home, there are still a few frills left to explore: the toys and the merchandise. With every new big blockbuster release comes an impressive toy line to collect. Thanks to Prima Toys’ Spin Master The Batman toys (based on the recent film by Matt Reeves starring Robert Pattinson as the Caped Crusader), fans are able to reimagine their favourite scenes during play or showcase their love for their favourite DC vigilante on their display shelf or office desk. And boy, there are plenty of cool options.

Since the film dropped in March, South African fans have been waiting for the action figures and toys to arrive on our shores. Unfortunately, with COVID-19 restrictions, a few things take a little longer than they did before. As such, we only received The Batman Spin Master toys in April / May. Still, it was definitely worth the wait as there are plenty of great options for kids and adult collectors.

One of the coolest aspects of the new Batman film is how Matt Reeves has focused on the detective side of the character, something missing from most of the other live-action films. Robert Pattinson’s character is investigating crime scenes and figuring out The Riddler’s clues throughout the film. Spin Master has cleverly taken that side of the film and created a few interactive toys around the idea.

What’s really cool about this product is that it will allow your kid to feel like Batman. The mask is a very accurate replica of the one worn by Pattinson — except it has a red reveal lens and LED light which can be attached over the left eye. Under the red light, we’re able to see the mysterious image hidden on the clue cards included.

All the items can also be neatly stored away in the detective case — which fits onto the adjustable utility belt.

The biggest issue I have with The Batman Detective Playset Kit is that it doesn’t fit me at all. So all the fun was left to my 4-year-old son. As a kid’s toy, however, it is really well put together. It’s well worth the purchase price.

Batman soars through the skies of Gotham City on epic adventures! From the new movie The Batman, Wingsuit Batman has a bat symbol that lights up red and wings that pop out with a push of a button.

One of the most controversial and talked about moments in The Batman occurs when the Dark Knight decides to use a wingsuit to glide across the city. While some fans were shocked and surprised by the use of a more practical and realistic glider (in place of Batman’s traditional cape turning into a flying device), others praised the new take as innovative. Also, considering this is Year 2 Batman, it is still early days for our hero and so the wingsuit makes perfect sense.

Spin Master has now added that wingsuit to a 12″ action figure — which has 11 points of articulation, interactive lights and sounds, and a button to deploy the wingsuit.

While the facial features of the action figure aren’t 100% accurate (the eyes and the skin tone are a little off), the number of features included more than makes up for it. The suit looks great and has a glowing red Bat symbol on the chest which plays 20 different sounds when pressed. The utility belt also hides a switch that expands the figure’s arms and legs on touch.

Collectors might be a little iffy about the face, but kids will absolutely love playing with this toy. The Spin Master 12” Wingsuit Batman figure is probably one of the most fun (and most interactive) toys in the Spin Master collection. It’s also a good size and is a lot bigger than some of the other options.

The Batman Movie 12 Inch Fig Wingsuit Feature retails for around R1200 on Takealot.

One of the coolest things about the new Batman is his Batmobile. Unlike previous versions, Pattinson’s Caped Crusader has a more practical (read realistic) muscle car. And it’s really beautiful.

Spin Master offers plenty of different toy versions of the Batmobile — some with lights and effects and others with remote control options. Then there’s the one we received — a really, really large vehicle without all the interactive features but still highly impressive and fun to play with.

When I first saw this Batmobile toy in stores, I was taken aback by its size. It has the perfect measurements for those who wish to display the vehicle on a shelf or desk. And while it might be aimed at kids, of all the things in the collection, I imagine this would be the one that catches the attention of most Batman fans.

Big enough to fit the included 12″ Batman figure in the driver’s seat (it has a roof that can open and close), the Batmobile has enough details on it to attract those who are into customising toys. Made out of firm plastic, I can imagine that there are many who would use this as a base to recreate a more life-like version of the vehicle. You could easily add lights and touch up the paintwork to make the mould come to life.

As I said, it’s not the most interactive (and the Batman included isn’t the most realistic) but it’s definitely the piece that collectors will want to acquire.

The Batman Movie Batmobile With 12″ Figure retails for around R1,499 on Takealot.

Of course, these aren’t the only The Batman toys Prima Toys has released in South Africa. There are plenty of other options, including 4″ figures, 12″ action figures, a movie gauntlet, and plenty of other cool toys available at your local store. They seem to be flying off the shelves, so catch them before they’re all gone.