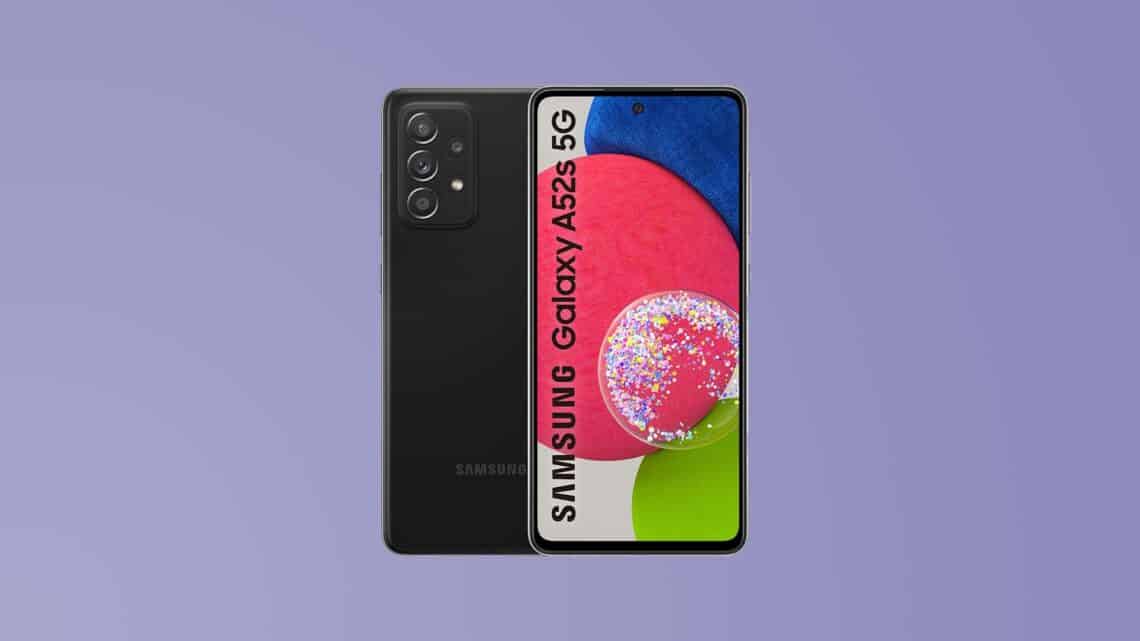 Can you purchase a phone with all the latest features for a low cost? Samsung answers the question with the Samsung Galaxy A52s 5G.

The smartphone industry has been pushing for multiple technology enhancements in the recent past. With the general mix of customer preferences continuously changing, so are the smartphones required to change as well. Some users prefer to consume and create social media content, while others are more focused on gaming, and others require simple telephony with long-lasting battery life. As such, we’ve seen many smartphones cater to these.

However, oftentimes, attempting to create a one-size-fits-all approach dramatically escalate those costs. Samsung has recently updated their A range of smartphones to fill the gap in these spaces without putting a dent in your pocket. One of those units is the Samsung Galaxy A52s 5G.

Additionally, to the above-mentioned, connectivity has also seen tremendous growth with the advent and commercial availability of 5G. And, as is suggested by the “5G” portion appended to the title, the A52s ticks this box, too.

With the marketing-driven toward cost-sensitive users, how does the A52s compare against the other Samsung smartphones, as well as other mid-range units in the market? Looking at the unit front on, you’ll realise that it looks remarkably similar to the Galaxy S21 range. In fact, it’s the identical shell that was used on the predecessor, the Galaxy A52, which launched six months prior.

That’s not too much of an issue, however, as the unit was always more about its enhanced internals when it comes to its release than redefining its aesthetics.

The glaring difference between the A52s 5G and the S21 is the larger bezels on the former. But, overall, it’s not a bad package. It sports a Gorilla Glass 5 protection on the front screen, with the rest of the case crafted in a plastic polymer, which was designed to look metallic. It does a good enough job of pulling this off in terms of looks, although it doesn’t feel that way holding it in hand.

The rear casing is where the plastic is most notable. If you flick it with your finger, you can audibly hear the plastic build, with a slight amount of flex. However, it’s quite robust. There isn’t any creaking or the likes when you attempt to flex the unit with the frame being quite sturdy under pressure.

It also carries an IP67 rating, which provides water and dust resistance.

The quad-lens camera is housed in a protruding island on the top left, which is standard for most modern mid-range units. There are no standout features here regarding the layout, with the three main lenses down the left-hand side and the depth camera and flash on the right.

One of the underrated inclusions on the unit is the 3.5mm audio jack. Great that it’s featured here.

Overall, it’s not the best in terms of looks but isn’t unappealing either. But, what’s most important, is that it’s solid and with added protection from the Gorilla Glass and IP-rating, provides some ease of mind when out and about. 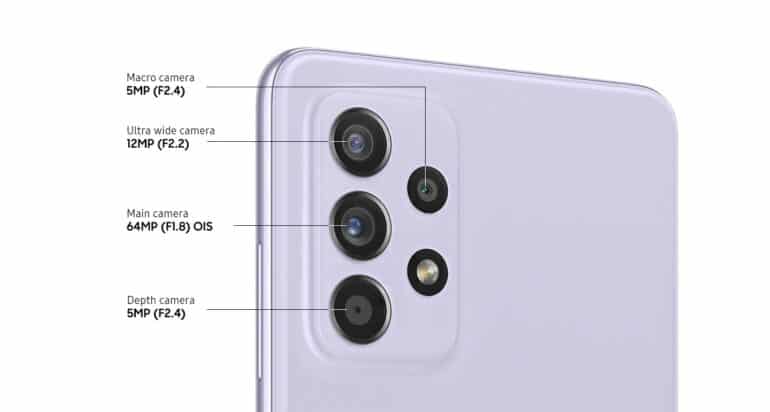 While it’s not quite flagship, I really enjoyed the screen of the Galaxy A52s 5G. It has a Super AMOLED panel, measuring in at 6.5”. It’s not as large as many other mid-range units that often tend to go bigger to offset some other shortcomings. I found the size near-perfect.

As mentioned previously, the biggest difference between this and the S21 is the larger bezels. It’s not unbecoming but it’s noticeable. The A52s has an 84.9% screen-to-body ratio while the S21 has 87.2%. Mind you, the screen is slightly smaller on the S21, so bezels are naturally smaller overall.

In terms of the display, it has a 1080×2,400px resolution. This results in a pixel density of 405ppi. The standard for decent pixel density is about 400 in general, so it is above that mark here. There is no visible pixelation when using the phone across any apps, even when viewing images, watching videos or playing games.

In addition to that, the colour reproduction is also great. On the colour coverage, it offers 99.8% on sRGB with a colour accuracy of 2.11. It’s vibrant and crisp, albeit down a few nits on brightness. But for the most part, you won’t even notice the lack of brightness while in operation. Being a Super AMOLED panel, contrast is also great, with really deep blacks.

Finally, it also has 120Hz support. This is great for gaming at higher FPS and also scrolling to the native menus. If there is one exclusion on the Galaxy A52s 5G is that it lacks HDR support. It still supports this when recording, but not when viewing content.

It’s a great screen for a mid-range smartphone when you consider the price. Apart from the brightness levels, which almost never have to be turned up to full strength in any event, the colour reproduction and clarity of the images are great. 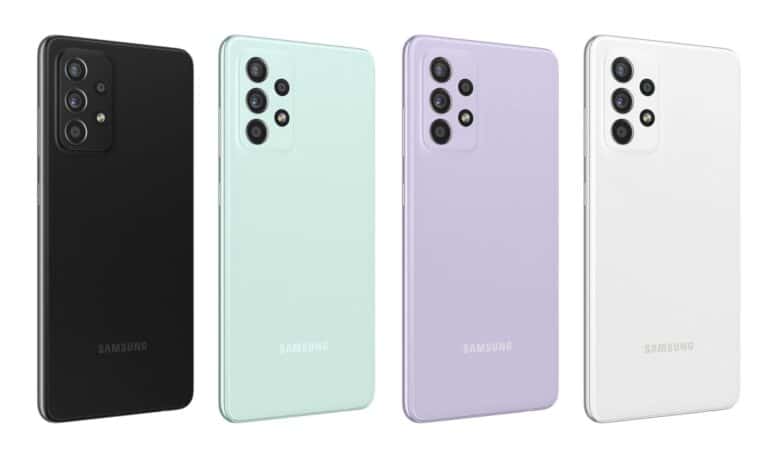 While the looks may be identical to its predecessor, Samsung has provided impressive improvements for the Galaxy A52s 5G’s internals. It has swapped out its Qualcomm SoC for a later version, albeit it is still down on the S21 range. Interestingly, the camera also remains the same as the previous unit.

Back on the camera. As mentioned, it has the same package as that of the A52 unit before it. This includes:

The unit runs on Android 11, along with Samsung’s One UI 3.1. It is also scheduled for Android 12 early in 2022, along with the One UI 4 update, which is very exciting.

To say that there has been a clear focus on improving performance on the Samsung Galaxy A52s 5G is an understatement. Between the previous and current models, Samsung has nearly doubled its performance when running benchmark tests. This is across the single-core CPU tests, with the multi-core results being around 50% improvement, which is still great.

When compared to other similarly-priced smartphones, as well as those with similar chipsets, the unit still averages somewhat 5-10% down. However, it more than makes up for that when it comes to other elements such as the screen and camera capabilities.

When it comes to gaming, the unit does a decent job with rendering and the likes. With its updated 120Hz panel, it puts it to good use. However, it doesn’t put it to the maximum use, with the average FPS reaching around 100FPS across some of the leading titles. However, this is still an improvement over its predecessor, which had a 90Hz panel with games reaching around the 60FPS mark on average. So, some great improvements when it comes to real-world gaming, which the unit was geared towards.

Using the conventional battery tests, the unit lasts just shy of 19 hours. It’s quite a long stretch with many other devices averaging around 12-15 hours. Under the more conventional use, it can easily survive into a second day, while also lasting about 3-5 hours of heavy gaming action.

The unit also comes with its own charger in the contents, which takes about 90 minutes to fully charge from zero to 100.

Should You Buy the Samsung Galaxy A52s 5G?

The Samsung Galaxy A52s 5G is a significant step up from its predecessor, launched earlier in 2021. It has greatly improved hardware, which delivers excellent performances across the board. It also has a great screen and 5G support to boot. All of this while keeping pricing down makes it a really great buy.

The unit retails for an impressive R8,999 and is one of the mid-range phones to beat for 2021 and into 2022. I would highly recommend the unit if you’re in the market for a new smartphone.

The Samsung Galaxy A52s 5G is an impressive mid-range smartphone in terms of its hardware capabilities. In addition, it also offers 5G support, making it next-generation compliant as well. But, what really stands out is the cost of the entire package.