Robin – A Look Back At Batman’s Sidekick Through The Years 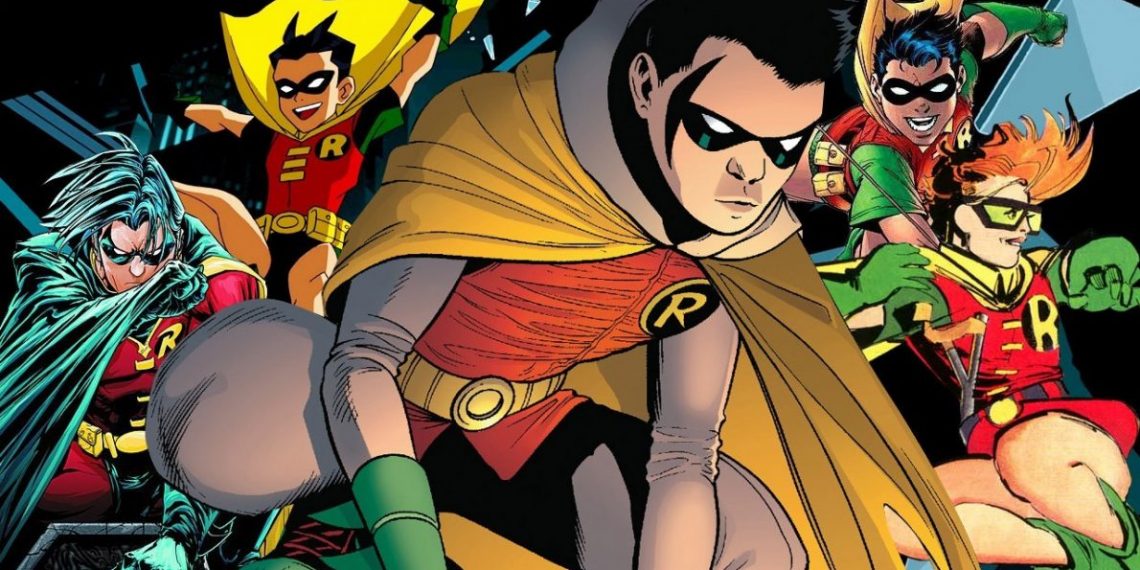 It’s strange but, when it comes to sidekicks in comics, Robin is still the benchmark by which all others are judged.

When he was first created, it was basically a marketing ploy to stick a kid with Batman to appeal to the younger readers. With a signature look of the red top, green gloves and underwear, bare legs and green booties, all framed with a yellow cape, he became as instantly recognisable as Batman, Superman and the other characters of his day. Regardless of the questionable fashion choices made, he doubled sales on the comics almost immediately. The dynamic duo of Batman and Robin was a hit, and they went together like bacon and eggs.

There have been many incarnations of the character over the years, and only one has been a Dick (unless you count the Jason Todd and Damien Wayne). From the original Dick Grayson to snotty upstart Jason Todd, fan-favourite Tim Drake to bobble-headed Damian Wayne, they’ve all made an impact. There have been girl Robins, alternate universe Robins, future Robins, movie and TV show Robins… not bad for a character who’s been criticised over the years for everything from the hideous costume to be being completely pointless. So here’s a look at the highlights and lowlights for Robin, in comic books, films and pop culture, over the years… 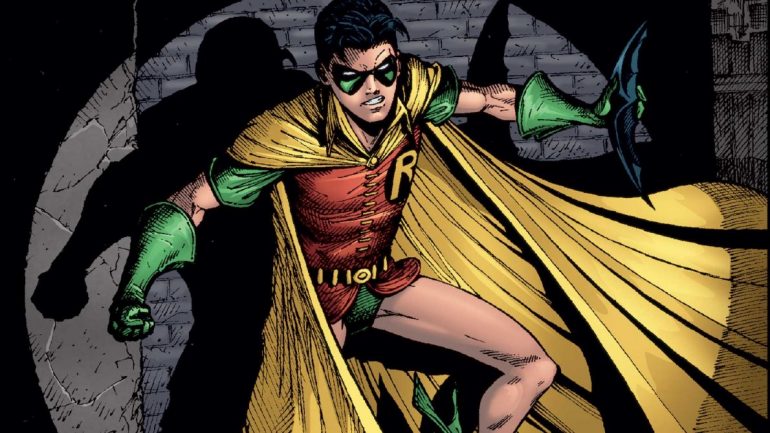 Robin is the man!

Dick Grayson was the first Robin, and for many, he was the best. His gymnastic skills, quick wit and determination made him cool. He held his own with the grown-ups and was a founding member of the Teen Titans. Yet Bruce Wayne never adopted him and their relationship became more strained over the years, with Dick questioning Batman’s tactics. The weird unspoken love triangle with Batgirl in the mix made things even more complicated. That’s when Dick left to become his own man, gave the Dark Knight the Dark Finger, and re-invented himself as Nightwing. History was made and Dick never looked back…

Yes, Dick Grayson was never adopted, he was billed as Bruce’s “ward”. Enter the Ward to play the ward, Burt Ward, in the ‘60s TV show. Sure, there had been other actors playing the role before, but Burt Ward really made the role work. The pint-sized estate agent-turned-actor was a gifted athlete (he was the world’s youngest professional ice skater at the age of just two years old), excelling in football, chess, track and wrestling, and was a comic book fan with a black belt in Taekwondo. He did most of the stunts on the show himself, suffering burns, bruises, cuts and asphyxiation, but won our hearts with every episode. If you get the chance, check out what happened behind the scenes. You won’t believe all he went through. 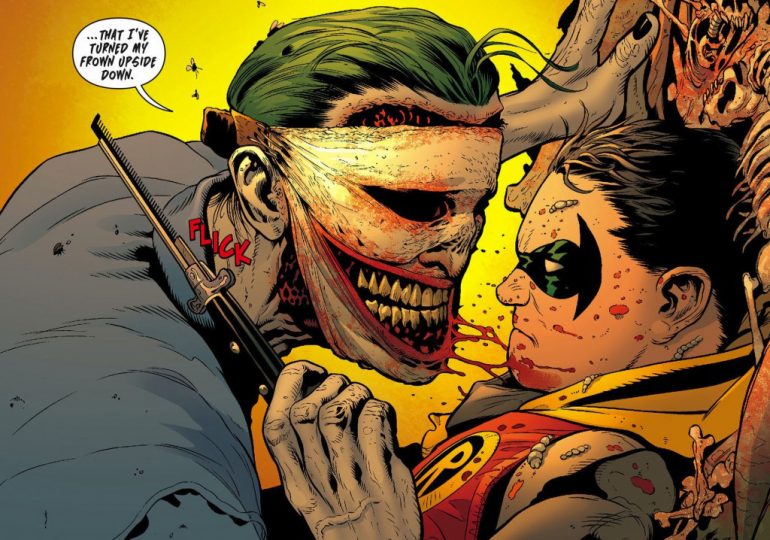 The second Robin, Jason Todd, was the biggest tool since the Joker’s giant prop mallet. Reckless and arrogant, Jason was the sort of kid who put an end to the whole cute kid syndrome. He didn’t get any better with time and went off on his own quest to track down his biological mom. His quest led him to get brutally beaten by the Joker and was then trapped inside an exploding building. DC Comics decided to let the fans vote if he lived or died, and the fans chose death. This may have appeared like the fans hated him at the time (which would have been no surprise), yet it appears that some fans who voted for him to live actually thought they were voting in favour of the return of Dick Grayson.

Tim Drake was a Robin the fans could love. More of a detective and hacker than a natural athlete, Drake figured out Bruce Wayne’s identity through old-fashioned detective work, starting with learning the original Robin’s identity and then carved out his own path as the latest sidekick. He changed the costume and put some pants on, along with figuring out fighting tactics which favoured his more limited abilities. He even gained his own series and became one of the coolest teenage characters in the DC Universe, going on to lead his own team and becoming one of the most beloved characters in comic books.

In 1989 Tim Burton made Batman, one of the most successful films ever to feature confusing casting. Jack Nicholson wasn’t quite the Joker the fans wanted. Kim Basinger replaced an injured Sean Young as Vicki Vale. Pat Hingle was embarrassingly weak as Commissioner Gordon. Michael Keaton and Michael Gough were a great Bruce Wayne and Alfred though, although Keaton’s casting raised concerns at the time. However, many rumours started swirling of some actors being considered for the role of Robin in a sequel, such as Michael J. Fox and Eddie Murphy. Thankfully, fans dodged the bullet there.

The good, the bad and the ugly!

Joel Schumacher gets a lot of flak over his Batman movies. Hardly surprising, since he botched almost every single aspect of them. From Kilmer, Clooney and a Day-Glo Gotham to cartoon sound effects and diabolical dialogue, they were a mistake. Except for Chris O’Donnell. He made a surprisingly good Robin… at first. Of course, the minute he put on the rubber nipple suit and rubber lips, he was doomed along with the rest of the productions yet has thankfully managed to avoid any real criticism himself. 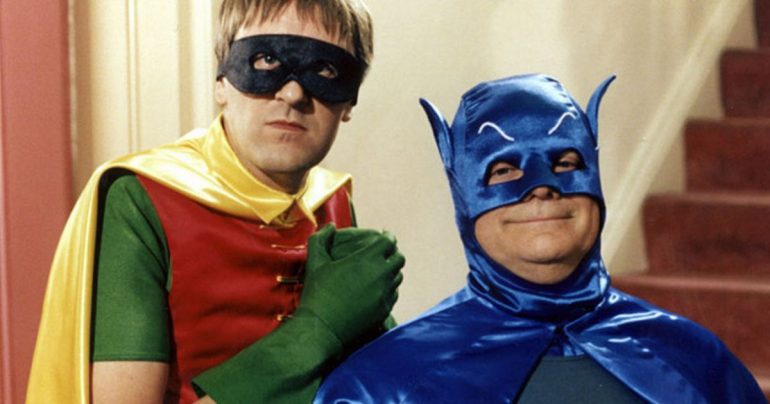 Robin usually has it all. Traditionally a good looking kid, Robin is athletic, smart, and has been trained to follow in the footsteps of Batman. It’s no wonder that TV character Rodney Trotter in the comedy Only Fools And Horse once filled his booties, racing around in the trademark Trotter 3-wheeled van until it broke down. The Trotter Robin did help stop some muggings, though. If that sounds like a little bit of a stretch of the spandex, seeing Rodney’s older brother Del Boy in a Batman costume was worse, and the recreation of the scene at the London Olympic Games closing ceremony seemed mistimed. The world was watching, and the world was baffled.

Will the real Robin, please stand up!

Apparently, the American version of the Rodney Trotter Robin is actor/rapper/Oscar winner Eminem. In his music video Without Me, he ran around in a Robin costume, headbanging in Dr Dre’s pimpmobile, climbing up buildings in classic Batman ’66 style and prevented kids from listening to CDs with offensive lyrics. Part of the song is sampled from the ‘60s Batman tune anyway, but it’s Eminem himself who makes the video work and he actually looks good in the costume. He also dressed in drag too in some of his videos, but it’s the Robin routine we love the most. 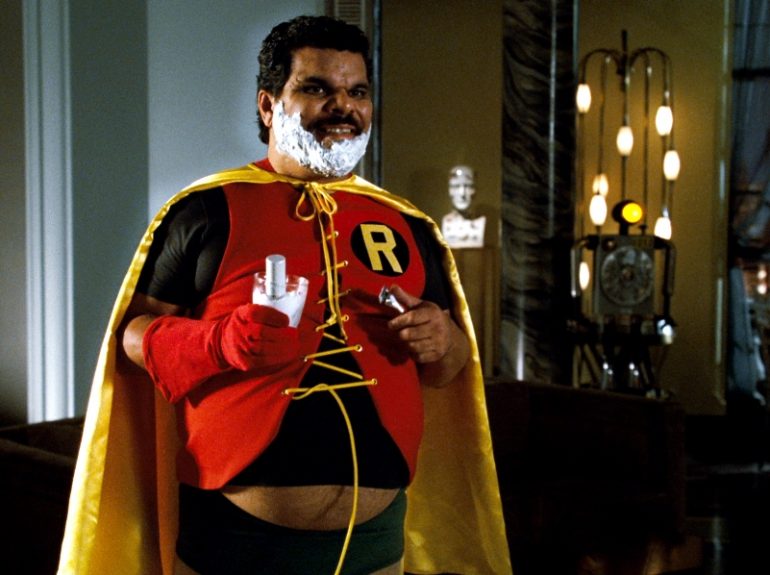 The remake of the classic comedy Arthur may have had faults but it also had one moment of absolute joy. The opening sequence with Arthur (Russell Brand) dressing as Batman and drunkenly joyriding up and down Wall Street in the Batmobile is hilarious. Especially since he’s joined by his sidekick Bitterman (Luis Guzman) who dresses as Robin, only with grubby brown suit shoes and black ankle socks. The suit looks good but Guzman doesn’t. If you don’t know why not, just look at him and you’ll get it. We love Robin, we love Guzman, but together they’re like peanut butter and motor oil.

If there’s one fan out there who can appreciate Robin, it’s Seth Green. With a comedy style inspired by another Robin, the late, great Robin Williams, he’s carved out a niche for himself as Hollywood’s super-cool short-guy geek. Not only does he provide the voice of Robin (and various other DC characters) on Robot Chicken in skits about Batman and Robin beating up Joel Schumacher (oh, like you wouldn’t), he also co-created the character of Norrin Weismeyer in his comic book series Freshmen. With a look and skill-set which is almost a duplicate of the updated Robin, Norrin’s cool. Imitation is the sincerest form of flattery, or so they say… 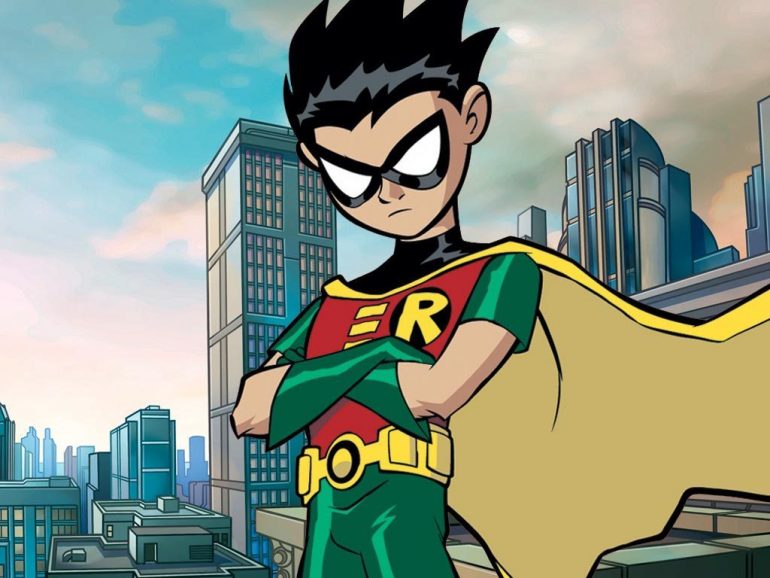