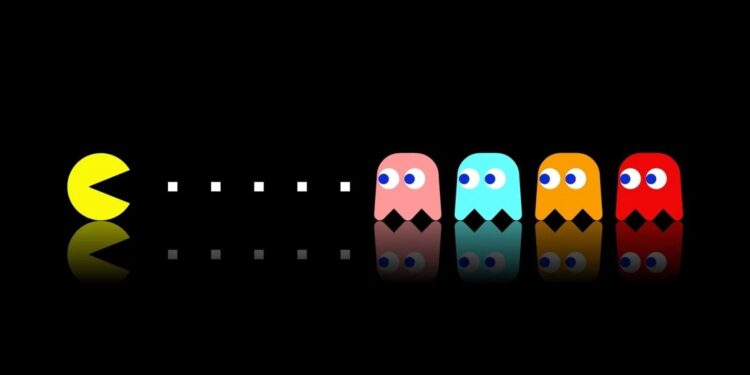 As one of the most instantly recognisable games ever released, Pac-Man is a true testament to the impact video games can make on a generation of players. As an ode to the iconic game, the Pacman 30th Anniversary Google Doodle was brought to life in 2010, celebrating the game’s success since its original release back in 1980.

For a game that follows a yellow ball eating and running away from ghosts, it sure has made its mark. The pop culture icon was created by a young video game designer named Toru Iwatani.

According to him, when he first began drafting the title, “arcades were filled with violent video games that had you killing aliens.” Toru Iwatani was already in the industry at this time, working for Namco. He further described the arcades as gloomy places where only boys wanted to hang out. Therefore, he set out to fight that stereotype by creating a game that women and couples could also enjoy.

As for the design of our main character, well, Iwatani claims that staring at a Pizza inspired the iconic shape we’ve got. The pizza was missing two slices and this resembled a mouth to Iwatani, so he decided to create “Pakkuman”, a character that is an onomatopoeic reference to the Japanese term “paku-paku taberu”. The term is usually used to describe the sound made by your mouth when it is opened widely and closed in quick succession.

It’s a brilliant way to come up with a character and that type of inspiration still holds up today after the Pacman 30th anniversary.

Rather than making our little pizza-slice boy fight off some menacing alien invaders or terrifying creatures from deep below, Pac-Man is really just running away from four ghosts. While this doesn’t sound like an intimidating adversary, the gameplay still invokes a real fear of getting caught off guard and losing a life to one of these guys.

Pacman’s signature move is his wide mouth. With this as his only weapon in the arsenal, players need to strategically chew their way to victory and Iwatani designed the game in such a way that Pac-Man could chomp away at pills, fruits and power pellets.

How The Game Works

Like most games in the 80s, Pac-Man was primarily made for the arcade, so the game was played with a joystick or keyboard arrows on PC. The goal of the game is to move Pacman’s character around the screen to consume the 240 dots. To achieve this goal, players need to make inputs to change the direction of Pacman who is perpetually in motion.

The four ghosts (who have their own names by the way) are Blinky (red), Pinky (pink), Inky (light blue), and Clyde (Orange). While you may be familiar with the ghosts as AI that simply chases you, you might be surprised to find out that each of these four have their own attack strategies.

Each of the ghosts will always be in one of three modes, Chase, Scatter or Frightened. Yes, you read that right, frightened. But that info will really feel like bait in the heat of the moment because you can never instantly tell what strategy a ghost is using.

Still, according to some Pac-man enthusiasts, these are some traits of each ghost. Check them out as you prepare to revisit it on the Pacman 30th Anniversary.

Blinky (red): Also nicknamed Shadow, he favours trailing behind Pac-Man but his strategy changes to cruising at Pac-Man’s speed and even faster once you’ve eaten a lot of dots.

Pinky (pink): She follows Pac-Man’s direction but doesn’t directly follow Pac-Man himself. Instead, she will manoeuvre around the closest walls in order to catch you off guard and take him out.

Inky (light blue): Inky might perhaps be the most dangerous of all the ghosts because he is a wildcard. His strategy is a mixture of every other ghost, so he can be extremely dangerous.

Clyde (orange): Clyde has the nickname ‘pokey’ thanks to his strategy of leaving the box and heading to Pac-Man but changing directions shortly after for a “scatter” phase. He is particularly dangerous in the lower left part of the maze.

The Impact of Pac-Man

The acknowledgement of its impact with a Pacman 30th Anniversary celebration is a testament to the beauty of the arcade game.

Pac-Man can be attributed to as an inspiration behind the use of Power-Ups in video games and how they motivate players to think strategically.

We can also attribute the popularity of cutscenes to the iconic game as they never really existed until this game came along.

Most importantly, Pac-Man introduced game designers to the real importance of the main character and how they can create a staple in gaming.

How to Play Pacman 30th Anniversary in your Google browser

One of the more interesting Easter eggs to have come out of the Google Doodle feature has to be their addition of the full Pacman game on the Pacman 30th Anniversary.

Today, all you really need to do is open your Google Chrome Browser and type in “Pacman” from your search bar to get a view of the Google Doodle. Following this, simply click on Play and you’ll be presented with a beginner level that was never present in the original game. This level is a way for Google to show off its hard work in creating the doodle.

On Mobile, the steps are pretty much the same — you will need to open Chrome on your phone and type in the search bar “Pacman” and here you will also be presented with the “PAC-MAN Doodle” right at the top of your search results. This is the same doodle from the Pacman 30th Anniversary, so tap Play to begin enjoying the first level.

For the desktop version, use your arrow keys to control the character and on mobile, you will simply use swipe gestures.