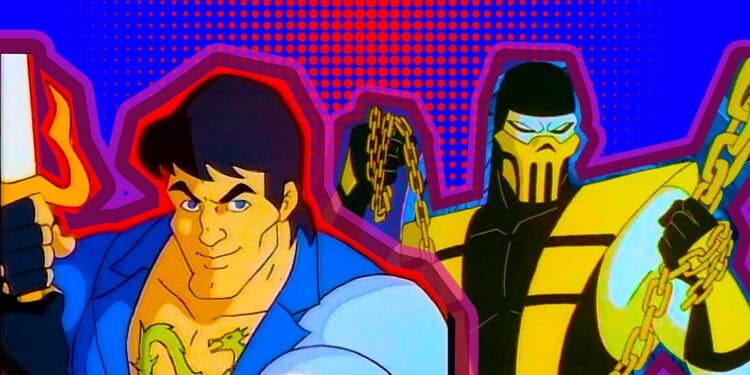 When Netflix first announced that they were working on an animated show based on the popular Castlevania video games, fans were both excited and a bit wary about how it would turn out. Thankfully, the creators stuck to the dark gothic, and gory, atmosphere that the games are so well known for. As a result, the show was a hit with fans and has just been picked up for a third season. Unfortunately, not all video game cartoons and animated shows stay true to their source material, with some even re-imagining beloved characters completely.

Grab your NES Zapper, put on your SEGA cap and get ready for some nostalgia induced love and anger as we look back at cartoons based on video games that we loved and some that we hated.

Mortal Kombat: Defenders of the Realm

I imagine that the creators of the Mortal Kombat: Defenders of the Realm animated show might have had a conversation like this:

Executive: “We should create a kids show based on a popular video game franchise. Any ideas?”
Writer: “Yeah, why not base it on a game known for it’s extremely violent finishing moves, gory combat, and scary characters?”
Executive: “I don’t know. It sounds risky.”
Writer: “We’ll make lots of money.”
Executive: “Sounds, like a great idea! Let’s do it!”

Why else would someone decide to create an animated Mortal Kombat cartoon aimed at kids?

Staying true to the video game, the show centred around a group of fighters summoned together by Raiden. These warriors were tasked with protecting the Earth Realm from the evil Shao Kahn and his minions. To its credit, it stayed true to Mortal Kombat lore and even added to it in some instances.

The show worked around the violent themes by having the characters face off against a continuous onslaught of robotic ninjas, instead of facing each other in a fight to the death. This allowed the show to get straight to the action but skip the spine ripping segments.

I have to admit that I actually enjoyed the show as a kid. Seeing Sub-Zero and Scorpion come to life as animated characters made many look past its faults. For what it’s worth, this was one of the ’90s video game cartoons I remember fondly.

The Legend of Zelda

As with most shows of the era, the story was a cut-and-paste ‘stop the bad guy from taking over the world’ adventure and followed our hero, Link, as he continually foiled the evil Ganon’s plans to take over Hyrule. Most episodes saw Ganon scheming to either steal the Triforce of Wisdom or kidnap Princess Zelda.

Known mostly in the show for his sarcastic catchphrase, “Well, excuse me princess”, which he would utter when his attempts at kissing the princess would fail, Link rarely came across as the hero of Hyrule we all knew and loved. Let me be honest, the series played fast and loose with the lore from the video games. It does, however, feature some recognisable monsters, items, and locations from the games.

Strangely, the show even went as far as to explain how Link was able to carry such a huge amount of items in the games. This was achieved by shrinking them in order to make them a more manageable size.

Even with its sometimes overbearing characters, sloppy animation and bad voice acting, I still found myself enjoying it. The fact that the show never took itself too seriously became part of its charm.

What is it with studios trying to turn violent video games into kid-friendly cartoons? For goodness sake, Double Dragon (the video game) kicks off with a guy literally punching a woman in the stomach. However, the fact that the writers were able to extract a coherent story out of the video game’s non-existent narrative is to be commended, even if it is a cliché-filled mess at times.

The show followed Billy and Jimmy Lee, two twins separated at birth (who have some absurdly proportioned bodies). Both twins end up being trained by martial arts masters, with Jimmy quickly discovering that he has actually been training under the evil Shadow Master, leader of the Shadow Warriors. After this revelation, Jimmy joins Billy and the two become the legendary Dragon Warriors. This affords them the honour of donning some really silly dragon-themed headgear that no self-respecting martial artist would ever wear.

It’s an over convoluted tale that serves only to explain why Billy and Jimmy continually beat up bad guys.

The fact that Double Dragon regular Abobo was removed from the show in the second episode of season one was an early indication that the show would do as much as possible to remove itself from what little lore there was. Why would anyone remove one of the franchise’ most beloved and well-known characters? Heck, Abobo even featured in the truly horrific Double Dragon live-action movie.

Overall, the show could have been called ‘Magic Dragon Twins Fight Evil Shadow Dude’. All that linked it to the gaming franchise was the names of its leads and the title of the show. Plus, the show probably had the worst intro music ever heard by human ears.

Speaking of shows that take liberties with the source material, Captain N: The Game Master was a show made to capitalise on the popularity of various Nintendo characters.

The show introduced us to Kevin and his dog Duke. They get sucked into the Ultimate Warp Zone and transported to Videoland. Kevin finds out that he is ‘The Chosen One’ who is supposed to stop Mother Brain and her minions from taking over Videogame Land. Armed with his trusty NES Zapper, controller and with help from some well-known video game characters, Kevin sets out to save the day.

Where the show totally loses the plot is when it comes to its interpretation (and I use this term loosely) of the various video game characters that hinder and aid our hero.

First off, we have Simon Belmont from the Castlevania series. Instead of being a brave selfless hero who whips the crap out off vampires and monsters, he is turned into a self-obsessed blubbering idiot.

Then we have Kid Icarus, who ends each sentence with the word ‘icus’. This gets annoying really fast-icus.

Lastly, we have a short overweight Mega Man, reminiscent of the classic Mega Man NES box art, who has one of the most irritating voices in the history of animated shows. He sounds like someone who smokes 30 packs of cigarettes a day.

Of course, as a kid who didn’t know better, I actually enjoyed the series and I loved seeing these characters interact with each other. It’s just that it could have been so much more had they stayed true to the essence of who these video game characters were.

Adventures of Sonic the Hedgehog

The Adventures of Sonic the Hedgehog was a batsh*t crazy, hyperkinetic, over the top series. It followed Sonic and Tails as they foiled Dr Robotnik’s plans to take over the planet of Mobius.

Unlike the excellent and just as over the top Ren & Stimpy show, Adventures of Sonic the Hedgehog lacked the necessary focus and skill to make it work. And even though the series was aimed at a younger audience, many of the episodes made absolutely no sense. The animations were terrible and frequently felt unfinished. Basically, it served as a way to capitalise on the character’s popularity, which, at that stage, started dwindling.

The worst part of the show was that the blue hedgehog came across as an absolute sarcastic jerk. And even though I do understand that it was deemed ‘cool’ to behave in this manner back in the early ’90s, it made Sonic truly unlikeable.

Having said this, there were a few episodes that went as far as to expand on the universe’s lore in a meaningful way. One such episode even explained how Sonic and Tails met, something the video games rarely ever touched on. If only the show included more of these types of episodes, the series might have been fondly remembered.

The ’90s was a strange time where even a lowly earthworm was able to ascend as a mascot for the Sega Genisis.

The premise of the show was far out and totally weird. Our hero Earthworm Jim discovers a ‘Super Suit’ that falls from the sky. Slithering into the suit, Jim gains a set of arms, legs and super strength, as well. After being ‘blessed’ with the super suit, it’s up to Jim to protect it from falling into the clutches of the shows numerous villains.

Earthworm Jim was a show that revelled in its absurdity, and rightly so. With memorable characters like Evil the Cat, Princess What’s-Her-Name, and Bob the Killer Goldfish, there was no way that you could not love this show. It’s proof that even a game with a nonsensical narrative could turn out to be something strange and wonderful, if done right.

The ’90s gave birth to some of the best kids cartoons of all time. One of these was the Teenage Mutant Ninja Turtles, probably my favourite show as a kid.

With the show’s success came a slew of inferior cartoons trying to hop on the ‘teenage animal somethings’ bandwagon. Not only did we get the totally radical Street Sharks, which turned out to be not as radical as one would think, but we also got Biker Mice From Mars and Battletoads.

Based on the hard-as-nails NES game with the same name, the Battletoads cartoon served as a sort of a prequel to the video game and saw three regular teenagers given the ability to transform into the Battletoads. With their super strength and the ability to morph their limbs into weapons, the now aptly named Rash, Zitz, and Pimple were charged with protecting Princess Angelica from the Dark Queen.

With some of the worst animation to ever grace our TV screens, not even the shows catchy Beach Boys-inspired intro could save it. The show never received more than one episode. It would seem that the execs quickly realised that the show might be one big wart.

Released in a time when everyone, including my parents, were obsessed with the yellow round-shaped hero, the Pac-Man animated series featured Pac-Man, his wife, Pepper Pac-Man (why not Ms. Pac-Man?), Pac-Baby, Chomp Chomp, their dog, and Cat Sour Puss. Each episode saw Pac-Man and co. battling it out against the Ghost Monsters, who would try to gain control of the source of Power Pellets.

If that wasn’t weird enough, the show’s main bad guy, a Darth Vader look-alike named Mezmaron, commanded the Ghost Monsters but rarely featured in any of the episodes.

How someone was able to extract all this narrative out of a game featuring a yellow circle gobbling up smaller circles is beyond me. As far as video game cartoons go, this one was always going to be a reach.

Can you remember any other video game cartoons from the ’90s we might have forgotten? Let us know in the comments.