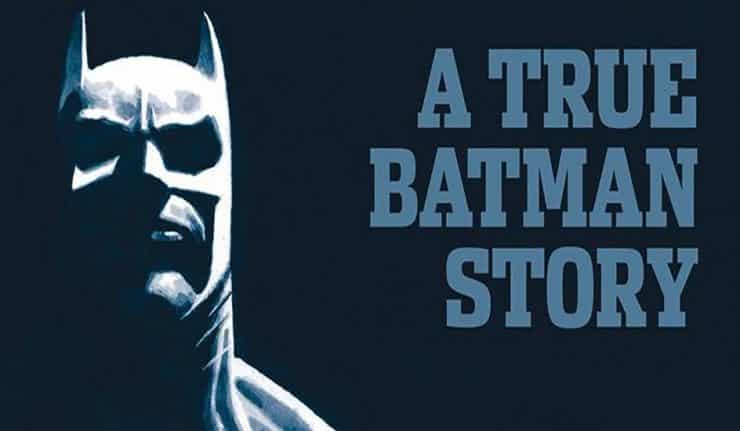 Over the years, Paul Dini has proven himself to be one of the best writers both in comic books and television. Take a look at his resumé, or take note of the many awards he’s earned if you need proof. Or, better yet, actually read his stories if you want to truly appreciate his incredible work. But if you want to appreciate the man too, then you must read Dark Night: A True Batman Story. [dropcap]F[/dropcap]irst of all, it has to be explained that this graphic novel is not a Batman story. It’s Paul Dini‘s story. He’s the main character, and the meetings that he has with the characters of the Batman comic books in this are all in his head. And that’s a good thing, because this is based on true events. This isn’t going to feature Batman clashing with the Joker and stopping a plan of world domination. This is the story of how Paul Dini was savagely mugged in 1993, beaten within an inch of his life, and how he managed to pull his life back together afterward.

We learn that before this incident he went from being a shy young boy with an overactive imagination to channeling it into a career working for Warner Bros. animation studios. With Tiny Toons and the Animaniacs ushering in a new era of cartoon brilliance, it was a good time for him. At least, in terms of the job and the rewards. Unfortunately, he was also distant to family and friends and incredibly lonely, suffering from occasional bouts of self-destructive behaviour.

Then, one night, he was mugged and his world came crashing down around him. His carefree existence became a nightmare, a twisted parody of itself. From reporting the crime to an unsympathetic police force to late nights of heavy drinking, days of shirking work and anxiety over simply being around people, his life fell apart.

And in the back of his mind, there was Batman and the Dark Knight‘s rogues gallery, pushing and prodding his damaged psyche in positive and negative ways. What follows is a long battle of physical and mental healing, as Paul Dini learns to handle his inner demons. There’s no closure and no easy solution to this, but he developed a new state of self-acceptance which has made him a better person.

[pullquote]Batman… pushing and prodding his damaged psyche in positive and negative ways.[/pullquote]

Yet, as the Joker rightly points out towards the end of Dark Night: A True Batman Story, why should we even care that this happened to Dini? Certainly, he isn’t alone in experiencing suffering. Dini survived, while people all over the world experience far worse every day. In those terms, yes, it can be viewed as a work of self-indulgence as he puts his life and his scars on display to be judged. But the Joker is wrong. This isn’t about a simple case of bullying; this is an inspirational account about how life can knock us down repeatedly, and how we need to get up and keep on fighting. Written as much as for himself as for the readers, it’s a subject that unfortunately too many people may be able to identify with. Told in such an honest way that it’s hard to not be touched by his words, Paul Dini has written a masterpiece. Likewise, the artwork by Eduardo Risso is truly stunning, shifting styles to match the moment. From the cartoon world of Warner animation to brutal realism of daily life, his work presents both flesh-and-blood real-world figures and a wide variety of fictional characters with equal brilliance.

Dark Night: A True Batman Story isn’t a happy tale, or even necessarily an uplifting one. It’s shocking, touching, sad… and one of the finest genuine graphic novels DC – or any company, for that matter – has released.