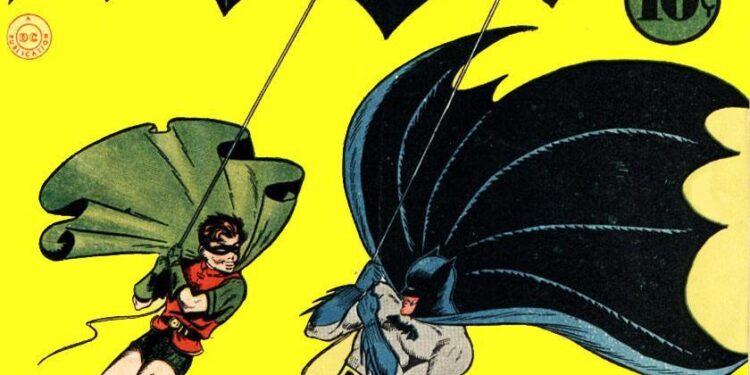 Batman, the character, turns 78 this year and he’s been through a lot over the years. From tragic losses to triumphant victories, he’s endured as one of the greatest comic book heroes of all time, known all over the world. He’s everywhere, from comics to cartoons, TV shows to movies, and you can hardly walk through a shopping mall without spotting him or his logo on at least one person’s T-shirt. He’s an icon of popular culture. The Batman of today isn’t the same as the one that was first created though. We look back at the first Batman comic, Batman #1.

Like all characters, he’s been streamlined over the years and every writer, artist and editor has put a little spin on him. He’s been campy and a comedy figure, a dark and brooding engine of vengeance, a team player, a loner, a mentor, a detective… the variations have been all across the board, and it’s hard to name any as the one true Batman. While I’ve got a soft spot for many of the versions (and I’ll take Batman: The Animated Series as one of the most definitive), instead I figured we’d get some perspective by looking back at the very first Batman-titled comic, Batman #1 (1940).

While he may have been created a year earlier and featured in Detective Comics, this is the first actual Batman-titled comic book. Over the course of his first year some changes had already been made. He gained the utility belt, the Batarang, and most importantly Robin, the Boy Wonder as his young sidekick. Batman #1 is also the first appearance of the Joker and The Cat, who would later go on to be known as Catwoman.

There are several stories in the very first Batman comic, beginning with the Joker who plans to steal priceless gems and kill the owners. What’s so mad about that? He actually announces his plans to everyone on the radio before he commits each crime, and leaves his victims with a rictus grin. It takes two murders for the Batman to put down his pipe and decide that “the time is ripe” to act. Their initial confrontation ends with the Batman being knocked out by the villain, but after committing another murder the Joker is followed by Robin. Almost as if he’s practising for later years, the Joker bashes Robin over the head and ties him up, wanting to kill the Boy Wonder. The Batman races in, and… well, you get the idea.

The second story features Doctor Hugo Strange turning escaped mental patients into giants and terrorising the Batman’s town of Metropolis (yes, I know, but Gotham only came later. I swear, it’s Metropolis here) before the Batman dispatches of Strange and kills the giants – and some henchmen – by machine-gunning them, hanging them, and even forcing them to fall to their deaths. It’s morbid stuff actually. The third story focuses on Robin investigating a jewellery theft on board a yacht, and the Batman shows up just in time to let the shapely female thief known as The Cat escape. Seriously, he “accidentally” stops Robin from giving chase before rambling on dreamily about The Cat’s lovely eyes.

The last story in Batman #1 is a follow-up to the earlier Joker tale, with the Clown Prince of Crime escaping his cell by using some explosive false teeth he had screwed in his mouth. Before you know it, he’s back on the radio and announcing more of his crimes before he commits them. The Batman once again fails to catch the Joker early on, and nearly gets unmasked by the cops for his trouble. However, as Bruce Wayne he convinces Commissioner Gordon to lure the Joker into stealing the Fire Ruby. The Joker falls for it, and after a fight against the Batman and Robin he winds up stabbing himself in the chest. Our heroes quickly run away, leaving the cops to deal with the mess and assuming that the Joker is dead. But as the ambulance carrying the Joker’s body drives away, the doctor announces with fear that the Joker is going to live…

These are good stories at their core, written (by Bill Finger) simply because of the medium at the time. They still hold up, even if you may find your eyes rolling at some of the awful dialogue and bad jokes said by some of the characters – especially Batman. He genuinely comments on a woman’s shapely legs and justifies killing easily. After noosing a giant’s neck with steel-like rope from the Batplane until the man dies, and then flying his corpse over the city while proclaiming “He’s probably better off this way”, the Batman seems less than heroic. The first Batman comic proves that he was always a little controversial.

The art by Bob Kane and Jerry Robinson is decent, imaginatively laid out and does the job even if it isn’t of the standard you see in modern comic books. It looks dated in the same way as the writing is dated. If you want to judge all comic books equally, it’s probably not very good at all. But it’s a part of history and you’ve got to judge it by the standards of when it was created too. Since Batman still thrives as a character, it’s fair to say that it made a real impression in its day, one that lasted.

More changes were made straight after the first Batman comic, like the Caped Crusader not using guns and avoiding killing. A change was added to this issue itself, one by the editor, who decided to have the Joker survive and become a recurring villain. It’s hard to imagine what Batman would have become over the years if the Joker hadn’t been there as his nemesis. Batman didn’t start here as a character, but this was one of the early milestones.

I don’t know where Batman’s going in the future of comics, but it’s always a pleasure looking back at his past. There’s always something good to be found.