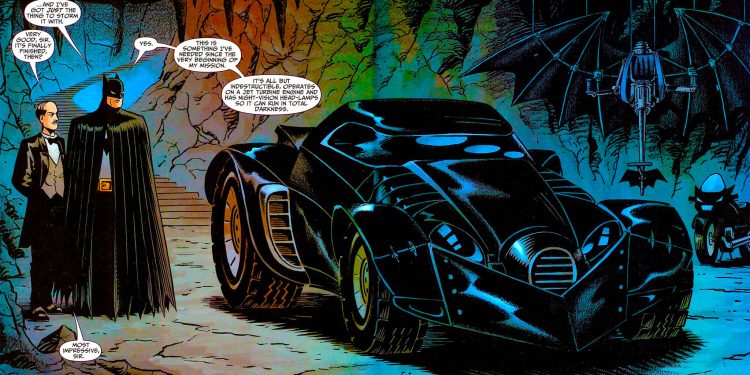 It’s the car most comic book-reading kids and adults want to own, even if it steers like a cow and is the vehicular equivalent of strapping dynamite to yourself. We all want the Batmobile.

One of the earliest comic books I ever read had a great cliffhanger. Batman is falling from a high rooftop to certain death. Since this was before the times of him using a grapnel gun, he had to manually throw a Batarang with a line attached as he fell, in the hope of it latching on to something to save him. Like a nearby flagpole. Only he missed. And so the caped crusader plummets towards the pavement, soon to be a smear on the ground. So how did he survive?

Simple: he signalled the Batmobile to drive remotely and stop directly beneath him, which then deployed a giant airbag for him to land on (much as movie stunt people use). But where did the Batmobile even come from originally?

It was genius, a moment which could have come straight out of an old serial movie. Actually, in those old serial movies, Batman fell off rooftops several times, although the Batmobile never saved him on those occasions. In those serials, the Batmobile was little more than a regular car, and the only special high-tech crime-fighting optional extra it possessed was a police siren to scare criminals. That makes sense. After all, criminals are a cowardly and superstitious lot. But where did the Batmobile even come from originally?

The Batmobile (not that it was called that originally) first appeared in the comic books and was just a red car. Yes, red. Not black. But it was in the comic books from the very beginning in 1937, and by 1941 it had a proper name and had been customized to become more than just a regular vehicle. It became the ultimate gadget for the ultimate crime-fighter, a sleek and supercharged engine of justice ready to aid the dark knight in his war on crime.

Then it was forced off a cliff and crashed. After only three pages.

Three pages. In less time than it takes to eat a sandwich, it was on the scrap heap. Sure, another Batmobile came along in the very next issue, but that isn’t the point. The point is that, as Batman’s gadgets and wonderful toys go, it’s a dud. I’ll be the first to admit that it’s one of the coolest vehicles in history.

It looks great, and I’ll be the first to admit that it’s one of the coolest vehicles in history. I have a soft spot for the Batman ’66 TV show one, which is possibly the most iconic car ever on screen (perhaps even more so than James Bond’s Aston Martin DB5, the Ghostbuster’s Ecto-1 and Doc Brown’s DeLorean from Back To The Future). That ’66 Batmobile is a truly gorgeous piece of work and, given how Batman’s life was saved by his car in that comic book I mentioned too, I do love the Batmobile in all forms. However, logically I have to admit that it’s a lemon.

Regardless of the incarnation, whether it be the original or the Batman ’66 version, the Tim Burton jet engine torpedo model, the Dark Knight trilogy’s Tumbler, one of countless Batmobiles in the comic books or the ones in the cartoons, the Batmobile is the dumbest gadget Batman has. I know a lot of people will argue against that, since Batman’s also had BatSharkRepellent spray, BatIceSkates and BatCreditCards, the car is no big deal. But think about it for a moment… It has its uses. I’m not denying that.

It has its uses. I’m not denying that. It has a super-powerful computer installed which can perform a forensic analysis faster than the guys in CSI and if needed it can drive itself around. It can leap chasms and out-race any vehicle on the road, as well as destroy any obstacle in its path. It has mounted machine guns and cannons, exploding hubcaps, that awesome airbag, can turn itself around 180 degrees on the spot and race up the sides of buildings if it has to. Oh, and it has that police siren just in case.

On the downside, it’s still just a car.

We know it crashes, often. In fact, there probably isn’t a version of it which hasn’t had some kind of accident at some point. And when it crashes, it crashes hard. It doesn’t matter what the reason is, whether it’s forced off the road by Mister Freeze or is being commandeered remotely by the Penguin, it’s an accident waiting to happen. It’s a turbocharged deathtrap driven by a psychopathic vigilante even at the best of times. How many innocent bystander’s cars did the Batmobile plough through in The Dark Knight? It’s a hazard to its own driver (although it does have seat-belts) and other road users, causing more property damage and destruction than any insurance company would cover.

Not that Batman would ever stop to give his details to whomever he hits, and we’ve never seen Bruce Wayne cut a cheque to make amends either. Worse, because it’s so obviously Batman’s car it’s an automatic target for villains. The minute they see it, they come out guns blazing or they hack its computer systems turning it into (as the Penguin puts it in Batman Returns) an H-bomb on wheels. It doesn’t matter if it’s armour-plated, any car driving near it isn’t and they’re the ones which will suffer damage.

But let’s put aside the civilian vehicles, the classic Gothic architecture rooftops in Batman Begins and the countless number of police cars which have suffered because of its presence, and look at the environmental impact for a moment.

It’s not easy being green, but the Batmobile is leaving a massive carbon footprint no matter what. It isn’t like those rocket motors run on regular petrol. The Batman ’66 version… that sucker was nuclear! The presence of the atomic pile in the Batcave was one thing, but even Batman’s instructions to Robin before setting off on an adventure – “Atomic batteries to power, turbines to speed” – probably never boosted Robin’s confidence that he wasn’t going to suffer from radiation poisoning.

Hopefully, their costumes were lead-lined, at least.

Of course, there’s another problem too. It’s the most glaring one of all, in fact. It’s a car, and that means it can get stuck in traffic. If you’ve ever driven down any road or highway, you’ll have run into traffic. Police cars get stuck in traffic all the time. So do ambulances and fire engines. Regardless of good intentions, vehicles hit traffic every time they’re on the road and it’s inevitable that the Batmobile would too. When that happens, Batman can always swing across town on his Bat-rope, use a Bat-jetpack or his trusty Bat-copter, but the car is his usual mode of transport for getting from A to B. Gotham is supposed to be a city packed with people and traffic. That means traffic jams.

Movies and TV shows like to show us empty streets when the Batmobile is racing towards the scene of a crime, but we know the truth of the matter: Gotham is supposed to be a city packed with people and traffic. That means traffic jams. The Batmobile, for all its speed, is still going to be stuck in bumper-to-bumper traffic going one mile an hour. Unless, again, he rams the other drivers off the road. It’s a no-win scenario.

And that’s why the Batmobile is dumb. It doesn’t take the world’s greatest detective to figure that out. I love that car, but deep down I know it’s a load of hooey. Thankfully, I’m willing to go along with it. It’s so cool that the suspension of disbelief is achieved, as it should be.