Can DC's Dark Knight stop an invasion of Earth? 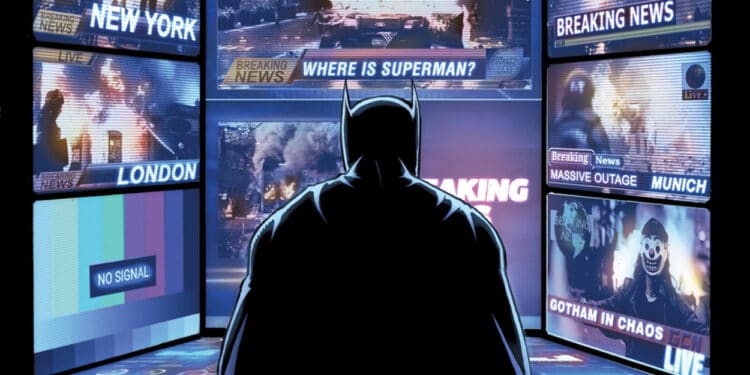 What happens when Batman trades the Batcave for a spot in Superman’s Fortress of Solitude? That’s the pitch for DC’s Batman: Fortress, a new comic book series from Star Wars: Rogue One‘s Gary Whitta and The Boys‘ Darick Robertson. With one of the world’s most powerful weapons in hand, Bruce Wayne must save the world from alien invasion.

When an unknown alien ship enters Earth’s atmosphere, disrupting global power and communications and plunging the planet into chaos, the world is left wondering…where is Superman when he is needed most? In the mysterious absence of the Last Son of Krypton, Batman must rally the rest of the Justice League to counter the alien threat…but first, he must quell a crime wave on the blacked-out streets of Gotham!

Batman is always an odd choice when it comes to fighting beings with extraordinary superpowers. Traditionally, the character has done better when he has fought more human-like villains. Batman v Superman and Justice League made that very clear. As a superhero without any powers himself, he is usually left running or focusing on the planning side of things — which might be the case here. Relying on Superman’s tech in the Fortress of Solitude, The Batman must use his intellect and knowledge to access Krypton’s tech and use it to protect Earth. Of course, he’s totally up for it.

Described as a “brutal and shocking” story that will “challenge everything you think you know about Superman”, Batman: Fortress is probably about to drop some huge Superman secrets.

“This has been my first opportunity to collaborate with my Oliver co-creator Gary Whitta for DC, on a character that is one of my all-time favourites to draw,” said Robertson in DC’s press release. “I’m having the best time creating the art for this series and with my pal and original The Boys editor, Ben Abernathy at the helm, it’s been a dream project, with a lot of fun twists and surprises ahead for the readers!”

“It’s always been my dream to write a truly epic Batman story, one that draws inspiration from some dark and unexpected corners of the DC universe,” said Whitta. “The opportunity to once again collaborate with my friend Darick Robertson makes this all the sweeter. I hope that together we’ve done justice to some of DC’s most iconic characters, while at the same time reinventing everything you thought you knew about them…”

Batman: Fortress #1 will be released on Tuesday, May 24.