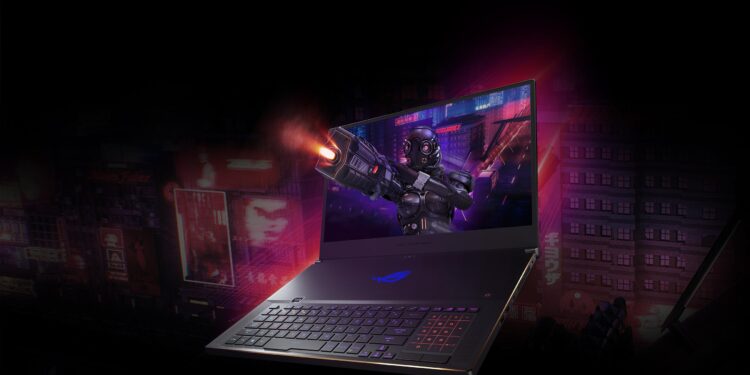 In recent years, ASUS has been releasing a number of dedicated gaming laptops. Even across the various ranges, each with their own standout features, the brand’s focus on performance has been evident. Having already reviewed units from the TUF Gaming and Strix Scar ranges, ASUS has already proven itself as a dominant force within the South African market of portable gaming. 2019 saw a host of new products launched with the ASUS brand, from the ZenBook Pro Duo and VivoBook to the three main gaming ranges. We recently received the ASUS ROG Zephyrus S GX701 for a few weeks, putting it through its paces. The results are very impressive, in keeping with the other ranges.

There’s a lot to love about the design of the GX701, as well as across the broader Zephyrus range. The frame is very sleek, measuring just 399x272x18.7mm. According to ASUS, that makes the GX701 roughly 23% smaller and 40% thinner than your average 17” gaming laptop on the market today. Those are some pretty impressive numbers to through around, but having it in hand and viewing it in person, it is definitely quite a solid design.

For those seeing a Zephyrus unit for the first time would immediately notice the strange keyboard layout. This is a common feature for most units in this range. The open space on the layout isn’t just for fun and games on the design but accounts for the ROG Active Aerodynamic System, otherwise known as AAS. With the lack of a standard fan blade system on the rather thin design, ASUS designers had to find a more optimum method for cooling its main components, especially when switching to Performance mode. Underneath the surface, there are numerous heatsinks and pipes used to push out the hot air and allow the flow of cooler air through its intakes. The unit also includes a built-in undertray which raises the flat under-surface of the unit off your desk, couch, or any other surface it’s resting on. At times I could feel the heat flowing through the GX701, but wasn’t overly affected by heated thighs thanks to this design.

As with many of the ASUS range of laptops, the unit has a backlit keyboard. It offers a full RGB lighting effect, with the ability to customise each key to a unique colour of your choice. With the layout pushing the keyboard to the bottom edge, there’s no room to include the touchpad in its standard position. Instead, ASUS deploys its dual-mode technology for the touchpad, which also acts as a numeric keyboard with a simple click of a button. While it may have been a forced change due to the design, it’s still a very impressive one to solve a problem. Just above the keyboard on the left-hand side, ASUS has included a scroll wheel, which can be used to adjust the volume levels on the fly. For the purists, it may not look as appealing, but I found it very useful, especially when in-game.

In terms of the ports, there is quite a number to note. The GX701 includes x2 USB 3.1 Type-C ports, x3 USB 3.1 Type-A ports, 3.5mm audio jack, an HDMI 2.0 port, as well as a Kensington Lock. The Type-C port can’t be used for charging the unit, but it can be used to keep the unit’s battery from depleting when it’s plugged into the port. At the same time, users can use the Type-C port to charge their smartphones while in use. So, you’re pretty much covered when it comes to covering all your peripheral connectivity requirements. If there is one port missing, it’s the SD-card reader, especially if you’re an avid photographer or the likes. It may be suggested that this isn’t the laptop for most photographers, but given the specifications and capabilities of the unit, I can’t see why they wouldn’t want one either. 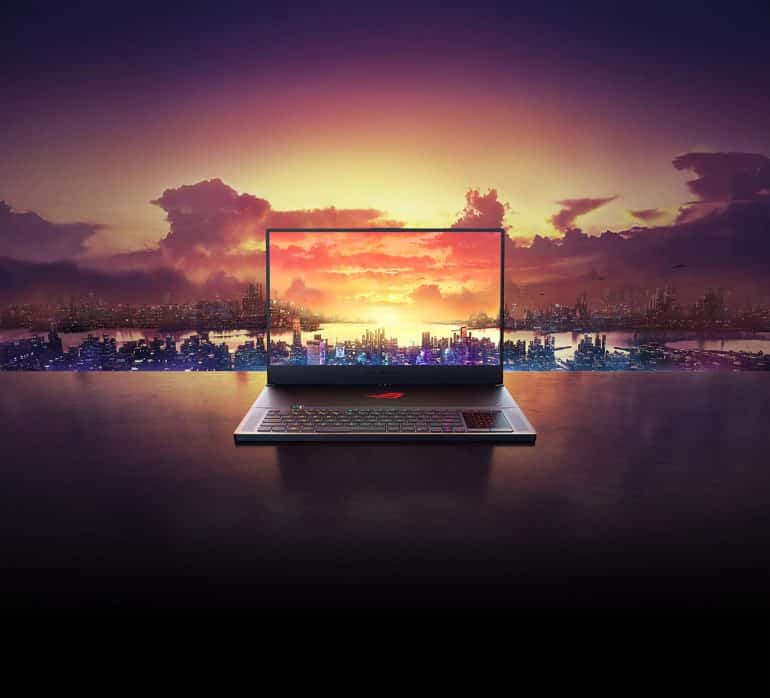 As already mentioned above, the design of the GX701 is fairly streamlined. One of the key points to achieving this is the reduced bezel around the screen itself. The unit sports a 6.9mm bezel around each of the four sides, giving it an impressive 81% screen-to-body ratio. In addition to this, there’s also no built-in webcam. While I may not be one to use the webcam, I can imagine that there are a few users who’d want the feature included. ASUS, however, has included a small external webcam, which allows users to clip onto the frame (or anywhere for that matter). Unfortunately, the webcam was not included in the contents for the review, so wasn’t able to explore it in detail.

The screen itself also has some good stats, all of which are worth writing home about. For starters, the 17.3” screen has a 144Hz, 3ms, Full HD IPS panel, which has been validated by Pantone for its 100% sRGB colour gamut. The display has the, now standard, 1920x1080px resolution, great for consuming content and playing games. Speaking of which, the GX701 also includes NVidia’s G-Sync tech to pair with the graphics card to keep up with the high refresh rate.

The Zephyrus range of gaming laptops has always been powered by some of the most impressive stats available. The GX701 is no different. The review unit I received included an Intel Core i7-8750H 2.20GHz CPU, along with 24GB DDR4 2666MHz RAM. These are alone are some really good numbers. In addition to this, it also sports the GeForce RTX 2080 (with Max-Q Design) for the ultimate gaming experience, paired with a 1TB PCIe NVMe m.2 SSD HyperDrive (Samsung MZVLB1T0) for an extra injection of speed.

In terms of outright performance, the GX701 has you pretty much covered for anything you can throw at it. And that’s not an overexaggerating. Testing a wide variety of tests and benchmarks, the unit aced all of it. Even under the heaviest of loads running games along with the browser with multiple tabs opened there was no lag to report. When you require the power, the unit can automatically switch to its Performance mode or users can manually control it themselves. Switching into Power-Saving mode can also be activated by means of a single click of a button.

When it comes to gaming, there was nothing that the unit wasn’t able to play on the highest graphics setting. The GX701 features the nearly-introduced Max-Q design, which runs aT clock speeds. In simple terms, it offers better performances on a smaller form factor, used especially for those thin laptops. It also reduces power consumption on base levels as the frequency is turned down and boosted when it’s needed. It’s still not the equivalent to the standard desktop RTX 2080 GPU, but it definitely gets a lot closer than previous variants.

I mentioned previously that the unit didn’t have the standard fan blade system. That’s not entirely accurate as there are blades, just not the standard propeller-style setup. Each of the fans has an anti-dust, self-cleaning design. Each of the 12 ‘VFans’ has 83 fins (not blades) for the most optimal cooling. There are a number of heatsinks and cooling pipes also added to the cooling system to keep it as cool as possible, even under heavy load.

When it comes to battery life, the GX701 is moderate, but nothing unexpected on a portable gaming unit. Under normal, constant usage, you’re able to get around three to four hours on each charge. Switching to more performance-driven tests, the unit eked out averages just over the two-hour mark. With the power-saving mode enabled, you can stretch it out a little longer, but this averaged anywhere between 30 and 60 minutes. What’s nifty about the unit is its charging capabilities. With its 65W power adapter, the unit can be charged to 50% in a little over an hour and 100% in just over two hours. Compared to many other gaming rigs, which can have charging times even beyond the four-hour mark, it’s quite useful.

The ASUS ROG Zephyrus S GX701 is a very capable, very well-rounded, portal gaming rig. There’s little to no negative aspects of the design, build and performance, making it one of the most capable units available on the market today. The inclusion of the new Max-Q design graphics card and other notable hardware, you will get the most out of all the games you have in your inventory. While there are some who will complain at the low battery life or the lack of an SD-card reader or Ethernet port, but these aren’t really going to be the main factors in purchasing a gaming laptop.

Depending on your configuration, pricing can vary from R29,999 to around R65,999 for the unit I reviewed. If you have the cash to spare on the gaming laptop then you definitely won’t regret your decision. However, if you’re a bit cash strapped, there are other units within the ASUS range that offer solid performances. Failing that, if you don’t need the portability aspect, you can also build a desktop rig for quite a bit less.

The ASUS ROG Zephyrus S GX701 is one of the most impressive gaming laptops available on the market today. Minus a few trade-offs, the unit is the perfect pairing for any gamer.