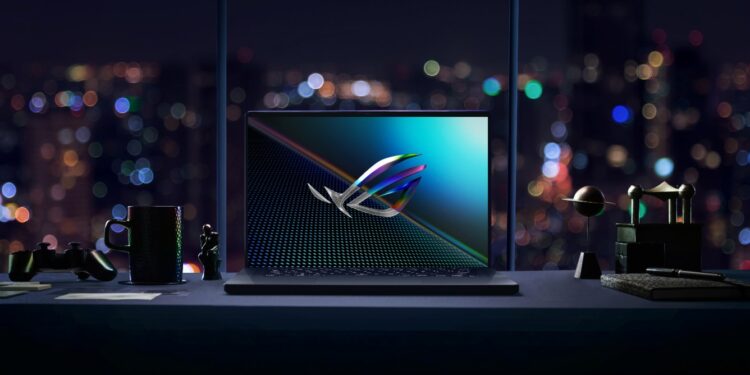 The ASUS ROG Zephyrus range has garnered a bit of a reputation as a powerful gaming range without having to break the bank. It’s well-loved for this across the globe. With the introduction of the Intel 11th-generation CPUs, it goes against the mould from the range. Will it have the same appeal as the rest of the range with its refreshed internals, or will we see a difference of opinion in that regard?

One of the key aspects of the M16 range is that it stays true to the historical design of the Zephyrus moniker. The matte black approach on the casing, along with the minimalist squared design ties right in with the standard look.

Previous Zephyrus units included some or other form of RGB lighting on the lid, ranging from customisable test to a simple light display. The M16 is styled very similarly, although the RGB lighting on the lid is removed. However, it still has a sparkle effect. The sparkles are created with a configuration of ‘microdots’ which are filled with a prismatic film. This gives it a rainbow appearance as the lights hit it at various angles.

When opening the lid, you’ll notice the keyboard layout is quite compact. There is no full Numpad here. Instead, there is space on either side of the keyboard to house two sets of grilles for ventilation. The keys have RGB lighting, which is customisable via the Armoury Crate software.

The entire ASUS ROG Zephyrus M16 weighs about 1.9KG while measuring in at 35.5×24.3×1.99cm (WxDxH). It is slightly heavier than comparative laptops, although it does have a 16” screen as opposed to the regular 15” variants.

I don’t mind the minimalist approach to the designs of the Zephyrus range. Much rather an unassuming gaming laptop with all the power at your fingertips, than an over-designed one that is all teeth and no bite.

There are quite a few ports to go around on the M16. Starting with the left-hand side, it houses the power input, full HDMI port, RJ45 Ethernet port, one USB Type-A port and two Thunderbolt Type-C ports. Additionally, it includes an auxiliary jack.

The right-hand side is less busy, including only a microSD card slot and another USB Type-A port. It also includes the Kensington lock at the back end. Both the left and right-hand sides do, however, feature a grille towards the rear for airflow to the fans.

There is no DisplayPort option available, which would be ideal for a modern laptop.

The biggest outward change on the new Zephyrus range is its larger screen. As mentioned above, it features a 16” screen with a 165Hz refresh rate on the IPS panel with 3ms response time. Its display has a native resolution of 2,500×1,600px.

ASUS manages to squeeze in that extra real estate thanks to much narrower bezels, which doesn’t increase the size of the laptop itself. There’s basically no bottom bezel to speak of. It achieves a 94% screen-to-body ratio – the most I’ve seen on any laptop to date.

It is crisp and bright with great colour representation. The 16:10 aspect ratio changes the dynamic when watching video content. However, when it comes to games and other situations, it works brilliantly.

In terms of colour specifications, it covers 100% of the sRGB gamut, 86% of the Adobe RGB colours and 98% of P3. Those are impressive numbers by any means.

Overall, the panel on the ASUS ROG Zephyrus M16 is also brighter than the M15 that came before it. This makes a decent amount of difference when gaming.

The biggest change to the M16 range is the inclusion of the Intel CPU. In more detail, that’s the 11th-generation Intel Core i9-11900H 2.6Ghz on the unit I received for review. That’s one of the more powerful CPUs available on the market today.

It also includes a 90Wh battery and runs on Windows 10 Home 64bit.

When it comes to performance, the ASUS ROG Zephyrus M16 has plenty available. That’s thanks to its Intel Core CPU. Under normal load, it doesn’t flinch. Take this up a notch to 50-tab browsing, playing a few videos while still running a game to trigger the GPU, and you’ll still be good to go. It really handles the load well.

With most other gaming units at the time sporting only Intel Core i7 or equivalent AMD Ryzen CPUs, the Intel Core i9 CPU breezes past the average Geekbench scores. At over 8,400 on the test, it squashes most of its other rivals, which typically achieve between 5,000 and 6,000 marks. Those are impressive numbers to boast about.

Where the performance is a tad slower compared to its rivals, it’s the 2TB SSD. Depending on the unit, it is down by about 10-20% on read/write speeds. That’s not too bad in the long run, but may affect a few gaming renders every so often, but you won’t really notice that drop in frame rate unless you’re actively tracking it.

Speaking of which, its Nvidia GeForce RTX 3070 Laptop GPU is a blast. Running a few gaming benchmark scores, it was capable of reaching well above the magical 30FPS on 1080p resolution on Ultra High settings. On most occasions, it was above the 60FPS mark as well. However, to achieve anywhere near that 165Hz refresh rate the screen is capable of, you may need to drop the graphics settings just a tad. It makes all the difference, being able to reach above the 120FPS mark.

Switching things up to the 1,600p native resolution and you’ll see a bit of a drop in the FPS. It then averaged around the 45-50FPS on higher graphics settings. This wasn’t too bad either.

ASUS Zephyrus laptops are known for having quite the battery life. That’s no different with the ASUS ROG Zephyrus M16.

During load testing, the unit was capable of lasting about eight to nine hours of normal video playback and some light browsing throughout. Under heavier load, you’re looking at around two hours, such as for gaming and possibly some hardcore video editing. It would be preferred to have achieved around the three-hour mark, as with many other modern-day gaming laptops but it’s not a major train smash.

It has a very good cooling system. As mentioned previously, there are grilles on the sides of the unit, as well as next to the keyboard when lifting the lid. There are also vents on the bottom of the device for that additional airflow. This keeps the chassis cooler for longer, which results in a better battery life overall.

Although it’s more than capable of keeping cool, it does tend to blow quite a bit on the loud side. This is especially true while under gaming load. With the volume of the game up, you won’t be too distracted by this. However, in a quieter setting, it will be quite noticeable.

There’s no doubting that the ASUS ROG Zephyrus M16 GU603H is an extremely powerful gaming laptop. In fact, it’s somewhat of a beast. With a mix of well-performing elements from the CPU and GPU, it produces all the gaming requirements you may need.

However, there’s a huge caveat with the switch to the 11th-generation Intel CPUs – cost. The Zephyrus range was well-loved for its cost-conscious gaming thanks to the more affordable builds led by the AMD CPUs. The base model for the M16 range starts at R33,999, which easily increased above the R40,000 mark with just a few upgrade options. The GU603H unit I received for review is well into the R50,000 price range.

The ASUS ROG Zephyrus M16 GU603H is truly a beast of a machine when it comes to performing under heavy loads. While there is still room for improvement on the graphics side, 1080p gaming on Ultra High settings above 60FPS is great by any means. You’re not always able to make the most of its 165Hz panel, but it’s still great to have. The only downside to the newly-introduced Intel Core i9 CPU is that there is quite a steep jump over previous Zephyrus gaming laptops.