ASUS unveiled its new Zephyrus range in 2019 and has been a popular feature for its gaming range. The Zephyrus range is featured among the three categories of ASUS gaming units, including the high-end Strix range and the rugged TUF series. The Zephyrus features the latest AMD hardware to provide the ultimate in gaming power. The ASUS ROG Zephyrus G15 was launched earlier this year with the latest 2020 specifications updates.

Having reviewed the ASUS ROG Zephyrus S GX701 earlier this year, the Zephyrus G15 is a smaller, lighter and more portable unit from the Zephyrus range, a change-up from the first product launch. However, the unit still packs quite a punch despite its size. 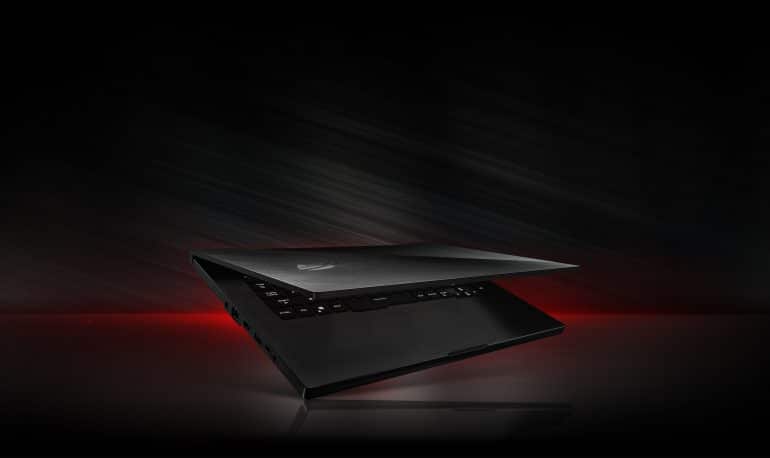 The Zephyrus G15 follows the same design principle as with the rest of the range. It doesn’t follow the tropes of most gaming laptops, featuring a more modest design. The frame features a squared finish and straight lines. The lid has a brushed metal finish with a diagonal brush. The only real standout design feature is the cutout on the backend of the lid with LED notification lights.

Another of the missing features compared to other gaming units is the lack of RGB lighting. Apart from the backlit keys and ROG logo, there aren’t any over the top stylings and lighting to speak of.

When it comes to specifications, the Zephyrus G15 is just on 2cm in height while weighing about 2.1KG. To make it even more portable, the unit can be powered using a portable charger and Type-C cable. This is extremely convenient, especially considering this is still a gaming laptop.

The squared frame makes for a sturdy build. The build quality is great, with no flex, creeks or anything else to speak of. Overall, it may not be the flashiest of gaming laptops around, but the quality and portability make it stand out despite that.

I’ve never been a fan of laptop touchpads. I have plenty of reasons for that. The Zephyrus G15 showcases one of those reasons, in that the touchpad isn’t very responsive. One finger scrolling is straightforward enough, but whenever you enter any gesture-based operations there tends to be a few issues. Anything from scrolling using two fingers to left and right swipes often take 2-3 efforts to get it right. Even worse are the left and right buttons, which are very hard to press. Thankfully, most gamers will have a dedicated mouse so you don’t have to be bogged down with the touchpad.

Contrasting to the touchpad, the keyboard is great. It may be a bit of a tight fit in terms of key spacing as a result of the smaller size, but the key travel and soft keys make it very comfortable to use when gaming. The RGB lighting also adds some flare to the very minimal overall design, which can be customised using the Armoury Crate software.

It has an ultra-thin design with a very minimal bezel on the sides and top of the screen. The bottom is slightly larger with the “ROG Zephyrus” logo presented below the panel.

The panel has a 240Hz refresh rate and 3ms response time, which makes it ideal for gaming and high-frame-rate content. In terms of colour reproduction, the unit has 100% sRGB rating. The device also includes a non-glare filter to protect your eyes from strain over long periods of use.

But it doesn’t just look good on paper, the real-world results are impressive too. While it may be a tad on the small side, watching HD videos and playing games on this laptop is great. The colour reproduction is good thanks to its Pantone validation and adaptive sync system, with the smaller size screen making for crisper imagery in comparison to larger units with the same resolution.

When it comes to specifications, ASUS did not hold back with the Zephyrus G15. The unit features the AMD Ryzen 7 4800HS Octa-core CPU at 2.9GHz. To put things into perspective, this is currently the third highest-rated CPU in terms of benchmark scores, meaning that it’s definitely no slouch. Further to this, the G15 also includes 16GB RAM (DDR4-3200), a 1TB M.2 NVMe SSD.

On the gaming side of things, it includes the NVIDIA GeForce RTX 2060 with Max-Q Design GPU. While some other leading units feature the full-specced RTX 2060, the G15 has the more mobile-friendly, Max-Q Design. While it does lag a few points down than its standard version, it still packs quite a punch when paired with the extreme hardware it’s been paired with.

Clearly, everyday tasks for this laptop is not an issue. Multitasking is a breeze, and no matter how many extra tabs I opened or apps I ran concurrently, the unit kept up its performance. Switching to gaming and the unit was just as capable.

Running games on ultra-high graphics and paired with the 240Hz refresh rate made for very impressive gaming. Depending on the game and settings, frame rates were anywhere between 100 and 300fps. It’s is worth pointing out that to constantly achieve the 200+ fps to enjoy the 240Hz refresh rate of the screen, most AAA graphics settings were set to Ultra using the 1080p resolution, for best results.

When it comes to battery life, the AMD Ryzen CPU was very efficient. During the standard workload and tasks, I could easily eke out 5-7 hours of battery life. If you’re using it just for browsing, you could probably reach up to 10 hours between charges. During the video playback testing, the results averaged around 6 hours, with gaming reducing this benchmark to around 2-3 hours depending on the game.

When I reviewed my first Zephyrus gaming laptop back in January, the approach was quite unique from ASUS. With no flashy lights and features, the ASUS ROG Zephyrus G15 didn’t feel like a typical gaming unit. But now, I’ve come to love that about the range. In addition, the build is extremely solid, and minus the poor touchpad, makes for great quality overall.

When it comes to power, the Zephyrus G15 won’t let you down. The unit I reviewed sported some of the best hardware available on a gaming laptop and delivered excellent results. Battery life, too, was quite impressive and made even better with the Type-C charging option. Although I wouldn’t think it necessary, there are higher specification variants of the G15, which will be overkill.

With retailing pricing starting from R29,999 for the lower end G15, there are quite a number of options to choose from. It isn’t the easiest on the pocket, but if you’re in the market for a high-end gaming laptop, the Zephyrus G15 should definitely make your top 5 list.

If you're looking for a powerful gaming laptop with no-frills design, the ASUS ROG Zephyrus G15 is a great buy. While it may have a high entry-level starting price, its powerful CPU, gaming performances, slim design and extreme portability make it a solid buy for any pro gamer.