Performance at the highest level. 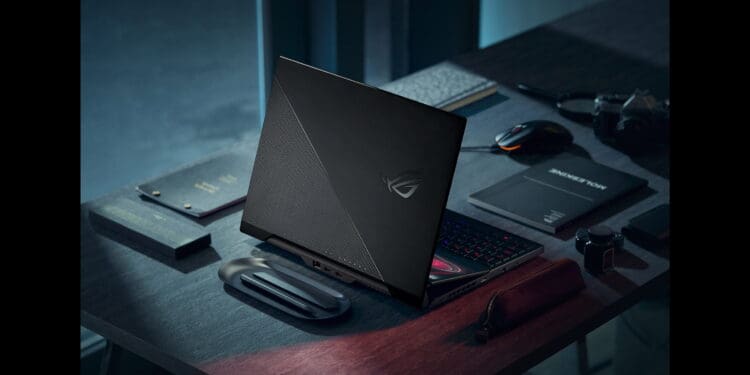 Just the other day, I reviewed the next-generation ASUS ROG Strix SCAR 17 G733 gaming laptop. The unit is an out-and-out beast in terms of performance thanks to its impressive hardware. This week, I review the ASUS ROG Zephyrus Duo 15 GX551.

While the NVIDIA GeForce RTX 3080 Laptop GPU was the drawcard on the G733, and although it’s back on the ASUS ROG Zephyrus Duo 15 GX551, it is the “Duo” text in the title is what stands out here. ASUS launched its first Duo laptop with the ScreenPad Plus technology back in 2019 on the ASUS ZenBook series. It has received a few iterations in between. With the latest edition, ASUS has gone all out in terms of its specifications, making a mobile beast on paper. But does this translate into the real world? 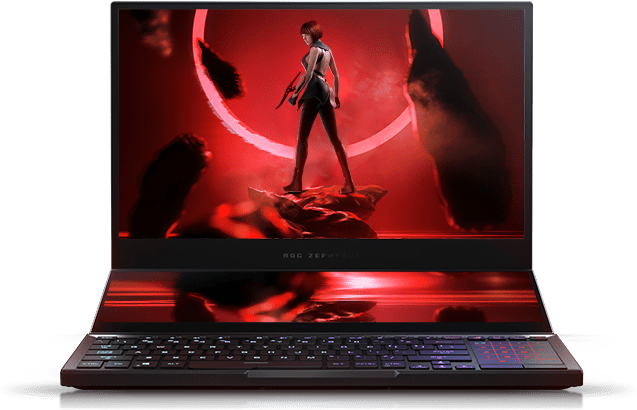 When pulling the laptop out from its box upon first use, there’s very little to note about its design at first glance. In fact, for a Zephyrus unit, it’s rather underwhelming. But even before you open it, there is some level of detail if you look a bit closer.

For starters, you’ll notice the diagonal line across the lid. On the one side, there’s the ever-present ROG logo with its underlying LED, which lights up your colour of choice. On the other end, it’s largely empty, but get in a bit closer and you’ll notice the stippled effect that fades from one end to the other. I like this effect. There’s detail there without it being too in your face, while also shows an aesthetic intent in the design.

Lifting the ASUS ROG Zephyrus Duo 15 GX551 out of the box it’s also fairly noticeable the device’s weight. It weighs in at 2.48KG. I won’t go as far as to say that it’s on the extreme side, but with many laptops these days floating closer to the 1KG mark and gaming units around 2KG, the extra 500g is significant.

When it comes to its size, it measures 20.9mm. This isn’t too bad, however, especially when you consider what is packed in once the lid is lifted. That is a second screen. This also accounts for the additional weight of the laptop. It fits on the top half of where the keyboard layout is typically positioned. The keyboard itself is moved all the way down to the edge with the trackpad been shifted to the right-hand side of the unit.

Personally, I don’t care too much about laptop trackpads. They’ve always annoyed me. So, to have it shifted from my general work area, the keyboard, is great news. The trackpad, however, also doubles as a Numpad, another of ASUS’ many tricks it has in its repertoire for years. If there is one annoyance about the updated layout, is that the keyboard sits quite low, which means you won’t have any area for your palms to rest. In the beginning, this is quite challenging and even puts strain on your wrists, especially when using it on your lap. You’ll soon get used to it, however. Using it on a desk or other flat surface isn’t as much of a strain, but still requires some adjusting.

Back to that second screen. In addition to existing, an achievement in itself, it also sports a sophisticated hinge that’s linked to the main hinge of the lid. When you lift to open the lid, the second screen is raised as well, positioning itself at an angle to make viewing and usage easier. I’ll touch more on the screen’s capabilities in the Screen and Display section below.

Despite the additional mechanics added, the lid is still fairly easy to lift with one hand. In fact, it feels quite smooth. The second screen isn’t raised immediately, either, allowing for some play in the lid opening before it lifts. It seems simple on the surface but still intrigues me as to how it works. Although I probably shouldn’t have bothered, I attempted to test whether closing the second screen would move the lid into its closing position. This, however, didn’t work. And that’s not a bad thing. The larger gears are most likely on the side of the main screen and lid, allowing it to easily position the second screen. You wouldn’t want the opposite to allow for movement as it would damage the system over time.

The screen itself is extremely sturdy. It doesn’t give any flex, bending or rattles when putting pressure on it. This ties in with the build quality of the entire laptop, which is carved out of magnesium-aluminide. The entire laptop and its internals scream premium materials. This should put you as the user at ease.

There are quite a number of ports to make note of on the ASUS ROG Zephyrus Duo 15 GX551.

For starters, on the left-hand side, you will find a microSD card slot (not many gaming laptops include this), the power plug, as well as the audio jack. Pretty standard stuff.

On the right-hand side, there’s a Type-C 3.2 USB port, DisplayPort and two additional Type-A 3.2 USB ports.

This already should be sufficient, but that’s not the end of it. On the rear you’ll find an Ethernet port, an additional Type-A 3.2 USB port as well as a full-sized HDMI 2.0b port.

That’s a pretty impressive list of ports on a gaming laptop, something we don’t see quite often. 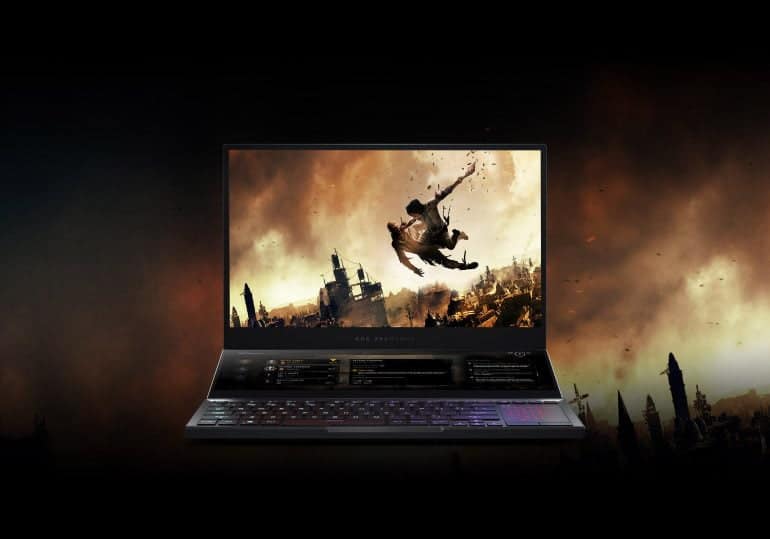 The second screen measures 14” diagonal, which was surprisingly larger than what I had anticipated from the 1920x540px resolution display. The IPS panel is listed as BOE NV140DQM-N51 (BOE0922). It, too, has a 142ppi pixel density.

Another bonus here is that it’s a touchscreen panel. This opens up quite a few possibilities in terms of use cases on the screen, other than being a simple informational display when in games or using other apps. This means that it’s easier to multitask, while also offering a timeline for music and video editing, creating additional HUDs for gaming, or even running separate apps within those games as shortcut keys (for those who don’t frown upon such uses).

While I haven’t been able to find any software that natively supports the secondary screen, there are options when enlarging the viewing area of any software to stretch beyond the main screen, allowing you to then adjust the menu items, etc. within those apps to then cater for those mentioned shortcuts and the likes.

Both screen measure quite well in terms of brightness, around 340nits according to research. It also covers 99.5% of the sRGB colour gamut.

When it comes to the specifications, the ASUS ROG Zephyrus Duo 15 GX551 definitely has you covered. Having been announced at the start of the year at CES, it sports some of the latest and best hardware around.

To start off with, the unit we received – one of the top from the range – featured the AMD Ryzen 9 5900HX with Radeon 3.3GHz CPU. There are three variants to choose from for the CPU, this being the most powerful of the bunch, without about 5-10% performance gains over the AMD Ryzen 9 5900HS variant. This is coupled with this we have the 32GB DDR4 RAM at 3200MHz.

One of the leading gaming units on the market, the ASUS ROG Zephyrus Duo 15 GX551 houses the NVIDIA GeForce RTX 3080 laptop GPU as one of the hardware components. This is a great addition for gaming enthusiasts.

When it comes to storage, the laptop fits a 1TB Samsung MZVLB1T0HBLR, an M.2 2280 PCIe NVMe SSD, for the ultimate in storage processing.

The unit runs on the 64-bit version of Windows 10 Home.

When it comes to performances, it’s nothing short of amazing. There’s really nothing this unit can’t do, whether it be multitasking and general workloads, all the way to 4K HDR gaming, it has you covered – provided you have an external 4K screen or TV. On the other hand, you still have access to gaming on a 1080p 300Hz panel.

If there is one downside to high-end hardware packed underneath the surface, is how that translates into real-world efficiencies. Given that the entire setup is fairly new to the market, there’s a lot of work ongoing in terms of drivers. This includes the CPU, GPU and even how it all integrates to the second screen during normal workloads as well as when rendering graphics within games.

What that means is that it runs hot. I don’t just mean a bit, it’s a lot. Playing games in 1080p resolution, you’ll notice some heat being generated which is a tad bit uncomfortable when playing on your lap. Turning this up to 4K resolution on an external screen and you’ll really start to feel the heat, to the point where it feels as if it’s overheating and can no longer remain on your lap as the fans are notably louder in an attempt to cool matters. It’ll still run games normally and you can monitor everything via the second screen using the Armoury Create software to keep things in check if it does become a concern.

Fitted with the laptop is a 90Wh battery pack. For your average workloads, owners can expect uptime of over nine hours. On our tests, it achieved around 9h20m on the three depletion tests conducted.

The unit is capable of achieving much more than this when you tinker with the settings a tad. Turn down the screen brightness and place it on battery saving, a silent mode within Armoury Crate, and you can extend the time between recharging to around 11 hours.

When it comes to gaming, it achieved just shy of the two-hour mark on the majority of the tests. This despite the overheating experienced on a few of the games under load. This is impressive and can no doubt be pushed closer to the three-hour mark with a few software tweaks.

Should you buy the ASUS ROG Zephyrus Duo 15 GX551?

The ASUS ROG Zephyrus Duo 15 GX551 certainly packs a solid punch. Its internals are top-notch with only a handful of devices offering a superior configuration that the hardware included here. While it is still within the teething stages of the GPU release, we can expect quite a lot of updates over the next six months or so to stabilise the performances and efficiency.

No doubt this will have a huge impact on the operating temperature which is quite high when playing graphics-intensive games that require GPU operations. Due to its second screen, there’s also some work to be done on ASUS’ end when it comes to working with companies and brands to create additional use cases and integrated software to fully utilise the second screen.

At a price point around the R90-R100,000 mark for this variant of the ASUS ROG Zephyrus Duo 15 GX551, it’s definitely not to be taken lightly. The laptop is very near to a complete package when it comes to what’s on paper and with a few updates over the next few months, those performances can only improve to extract even more performance from the laptop.

The ASUS ROG Zephyrus Duo 15 GX551 is a very near complete gaming laptop, even without the second screen. With a few additional use cases added as a result of the second screen, there’s quite a lot more value on the unit. And that’s to be expected from an R100,000 machine.