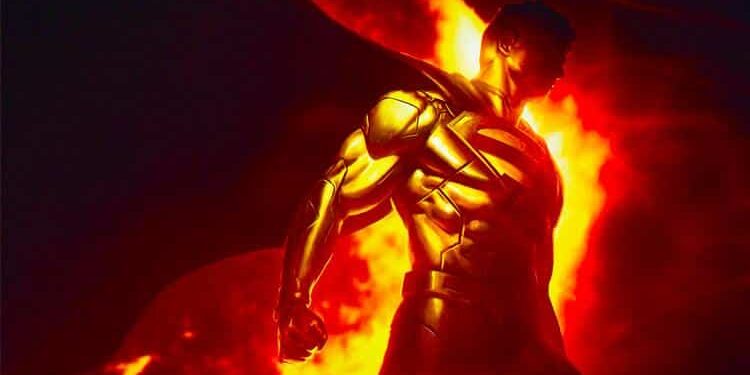 Fortress of Solitude previously featured the list of the Most Powerful Characters in the Marvel Universe. Now it’s time to take a look at the equivalent list for the strongest and most powerful DC characters. 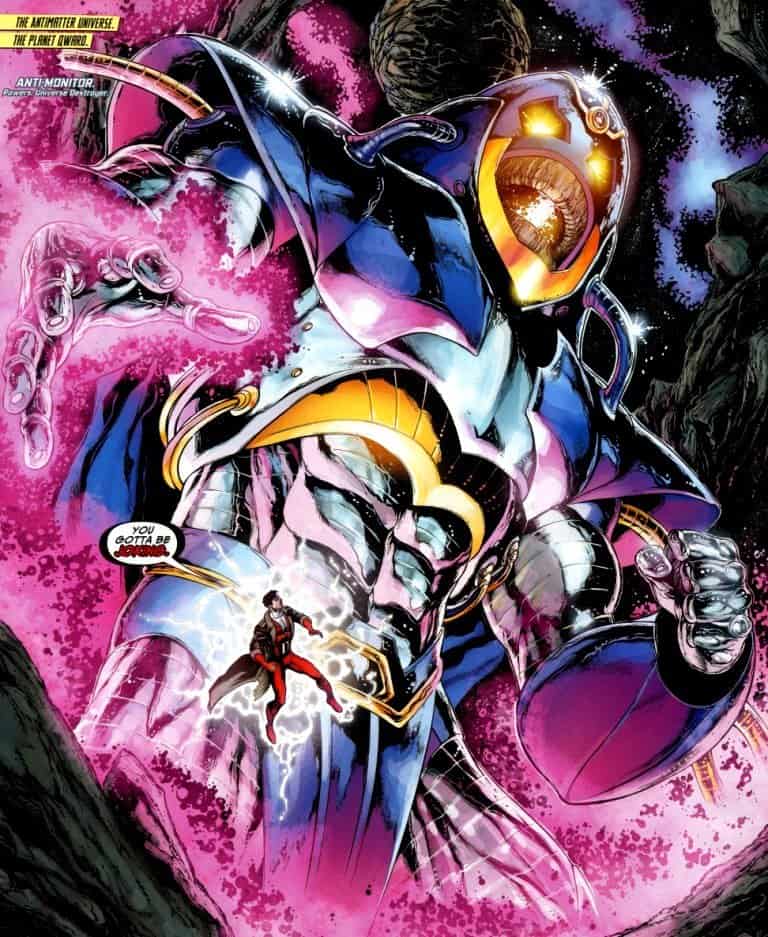 The Anti-Monitor is a supervillain from Crisis on Infinite Earths and first appeared in #2 of that series (he remained a “shadow” until #5).

He is The Monitor’s counterpart from The Anit-Matter Universe and was the sole Guardian of The Sinestro Corps. The Anti-Monitor was destroyed in #12 of Crisis on Infinite Earths, but returned in Green Lantern: Sinestro Corps #1.

The Anti-Monitor is definitely one of the strongest and most powerful DC characters. 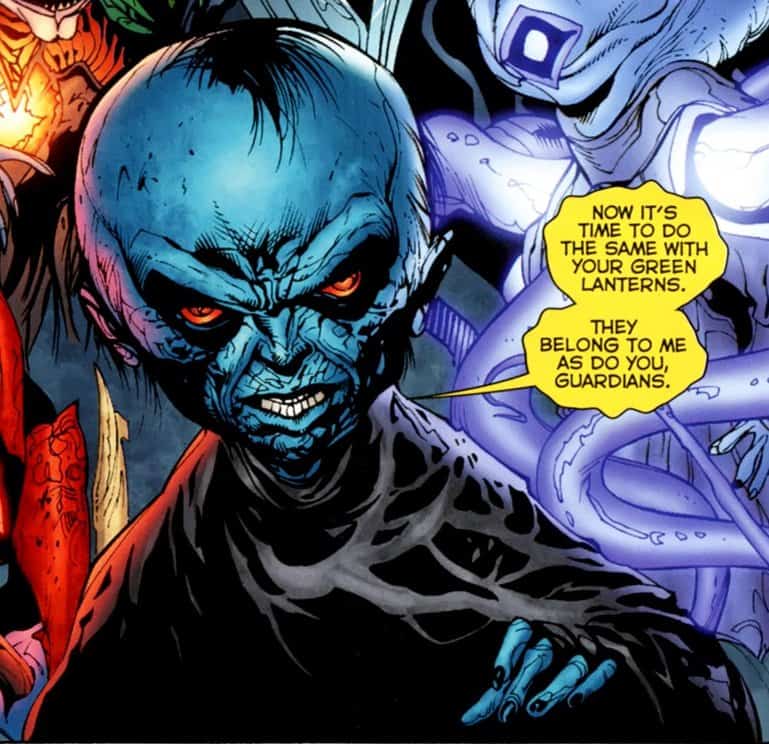 Born on Maltus as an Oan, Krona is a scientist and is said to be near-immortal and invulnerable. He also possesses psychic powers, which includes telepathy and psychokinesis.

Krona became obsessed with observing the origins of the universe, and how it began, despite the legend that doing so would bring about a great disaster. He constructs a machine, breaking through the temporal barrier, which allows him to view the beginnings of time itself.

Then he witnessed the hand of creation depositing the “speck” that would grow to become the universe, but this causes his machine to explode at that very moment. In turn, this causes the universe to shatter and, as a result, creates a multiverse as the universe replicates itself into parallel universes.

Hence, the Anti-Matter Universe is also created, releasing new evil upon the cosmos. This spawned the likes of The Monitor and Anti-Monitor. Interestingly, these actions lead to the Oans becoming the Guardians of the Universe, and their first act was to punish Krona, transforming him into pure energy left to wander the cosmos. 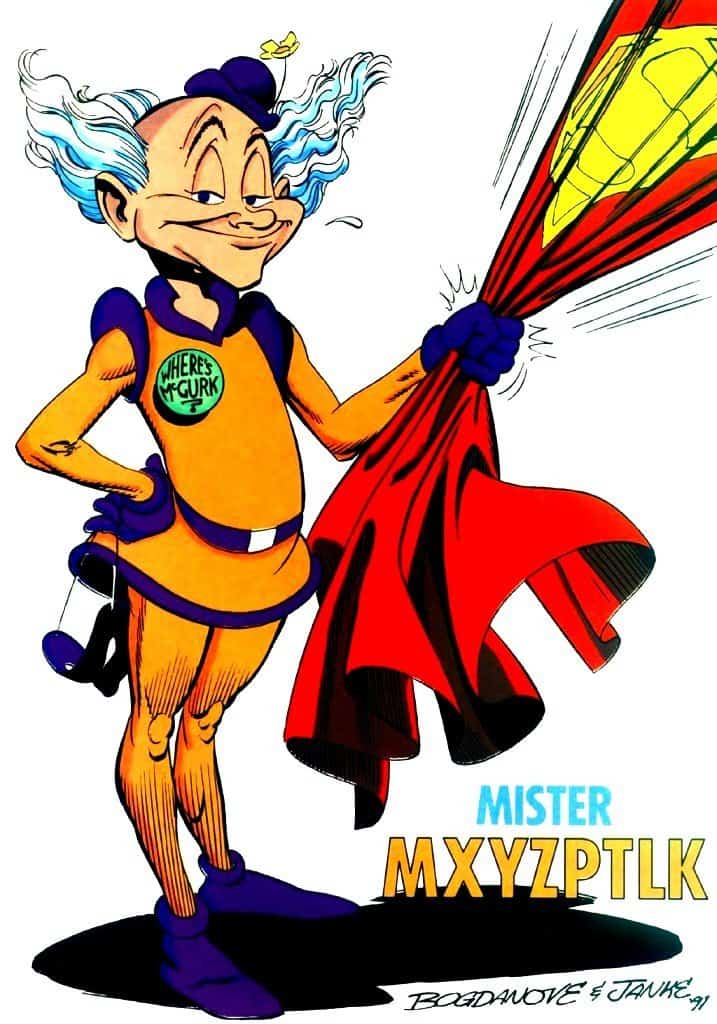 Hailing from the 5th Dimension, Mr. Mxyzptlk appears as an imp, fashioned as a jester of some sort.

While he has the power to do almost anything he is able to imagine, such as erasing any being from existence, he takes no pleasure or fun in that. Instead, he often seeks amusement, which sees him challenge Superman.

Mr. Mxyzptlk is not bound by any physical laws, his powers often appear magical, making him one of the most powerful beings in the universe. However, he never taps into his full destructive capabilities.

Ask any fan and they’ll tell you that Mr. Mxyzptlk is one the strongest and most powerful DC characters. 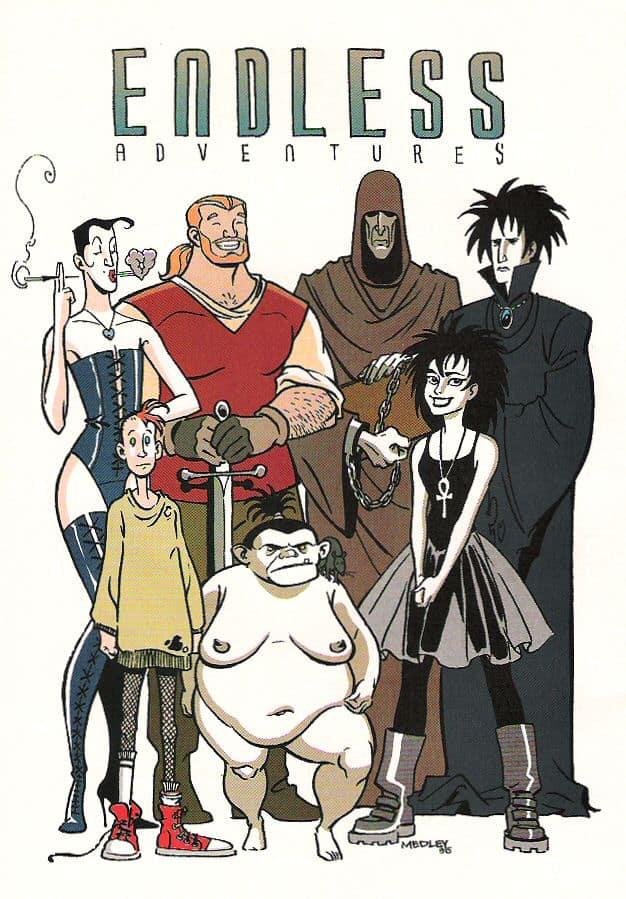 Technically, The Endless is not a single character in the DC Universe, but rather a group of siblings that embody seven different fundamental forces of our existence.

From the Vertigo comic series The Sandman, The Endless are ageless, immortal, and nigh-omnipotent. The seven siblings are not known to have names but are known by their function: Destiny, Death, Dream, Destruction, Desire, Despair, and Delirium.

Although a collective of concepts and ideas, each sibling has their own feelings, thoughts and personalities. Interestingly, each individual, while unique in their actions and personalities, are also depicted differently in the comics by means of their speech bubbles, with each having a panel description whenever an individual is speaking, and a caption to explain the uniqueness of the speech. 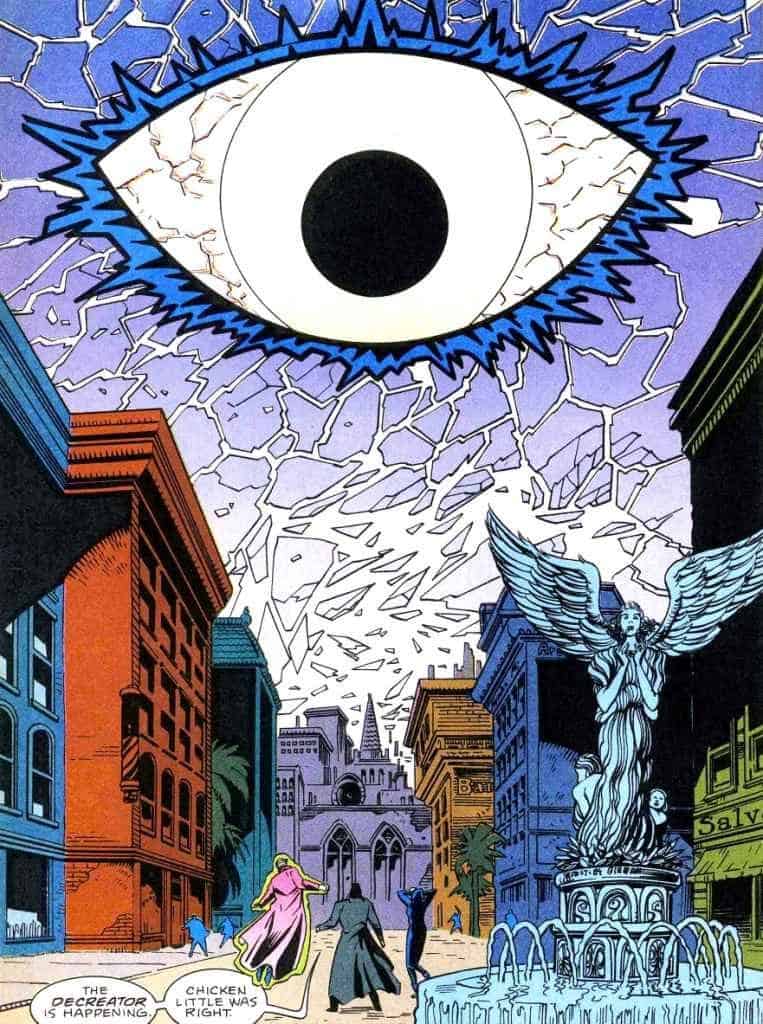 The DC Universe closely resembles the creation story and entities of Abrahamic religions. It is thus believed that God created the Earth with these words: “Let there be Light!” And it is those words that The Cult of the Unwritten Book, a group of supervillains which first appeared in Doom Patrol #31 (April 1989), believe cast a shadow that became the Decreator.

The Decreator, who cannot be reasoned with or stopped, is summoned by the Cult to unmake the world. The Doom Patrol succeeded only in slowing him down to such an extent that no one would notice the deconstruction of the universe by means of using similar vibrations equal to his powers. 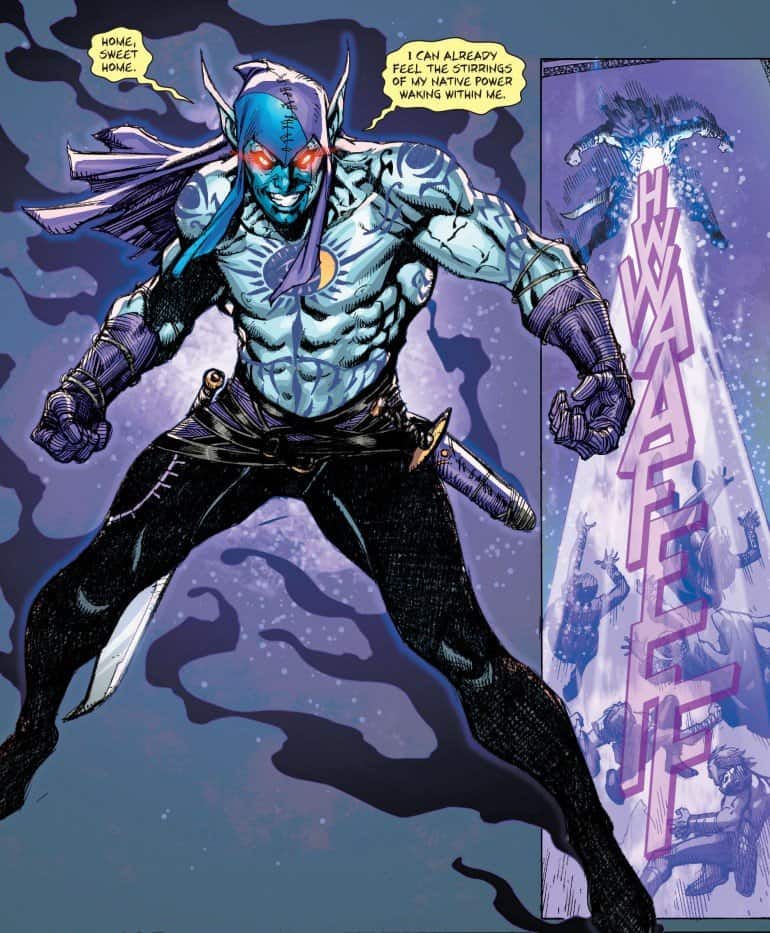 You can’t talk about the strongest and most powerful DC characters without bringing up Eclipso, a supervillain that first appeared in House of Secrets #61 (August 1963). He is the first incarnation of the Wrath of God and the Angel of Vengeance.

Eclipso is sealed inside the Heart of Darkness, which appears as a small, black diamond, first mined on the desolate world of Apokolips.

Eclipso possesses all those who come into contact with the diamond, most notably Bruce Gordon.

Dr. Gordon is a scientist of Solar Energy, ironically the one weakness of Eclipso. While studying and attempting to photograph an eclipse on Diablo Island, the natives feared this would steal the ‘sun god’. They sent their witch doctor, Mophir, who possessed the black diamond, to stop him.

While fighting, Dr. Gordon fell to his death off the side of a cliff but was wounded by the black diamond, allowing him to survive the fall. While picking up the diamond during the moment of the eclipse, it transformed Gordon into the host for Eclipso. 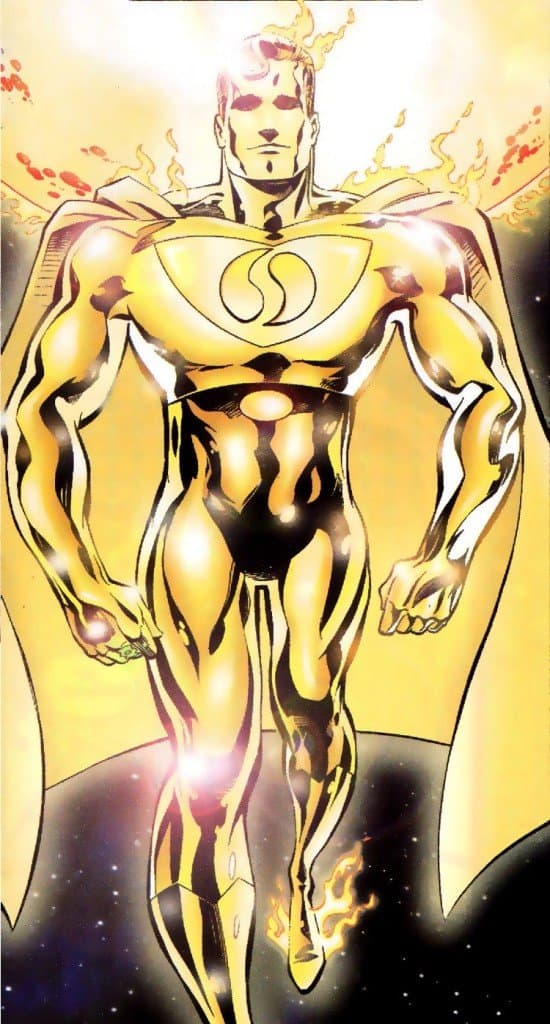 In short, Superman Prime is a version of Superman in the future.

After living inside the Earth’s yellow sun for 15,000 years, the Man of Steel enhanced his powers to great cosmic levels, giving him nigh-omnipotence, invulnerability, and the ability to create life and entire universes.

In the DC One Million storyline, the original Superman watched his parents, friends, and wife (Lois) die (from natural causes) without the knowledge and means to save them. As time went by, the sadness of his losses began to slow him. This ultimately led him to pass the reigns of being Superman to his heir, Superman Secundus.

He then left Earth. His travels would last until the 700th Century, during which time he acquired immense abilities from beings he met and perfected them as his own. Having broken through the Source Wall, he studied under the guidance of the Source (discussed below) itself, also being granted a portion of its power.

Although the extent of his new abilities are unknown, he would eventually return to Earth in order to forge a new covenant with his descendants. Superman Prime also gained the powers and abilities of his descendants and magnified them to the level of his own.

As part of the covenant, he would bestow a portion of his power upon them, as long as they served for truth and justice. He would later return to his Fortress of Solitude, now in the centre of the Sun. 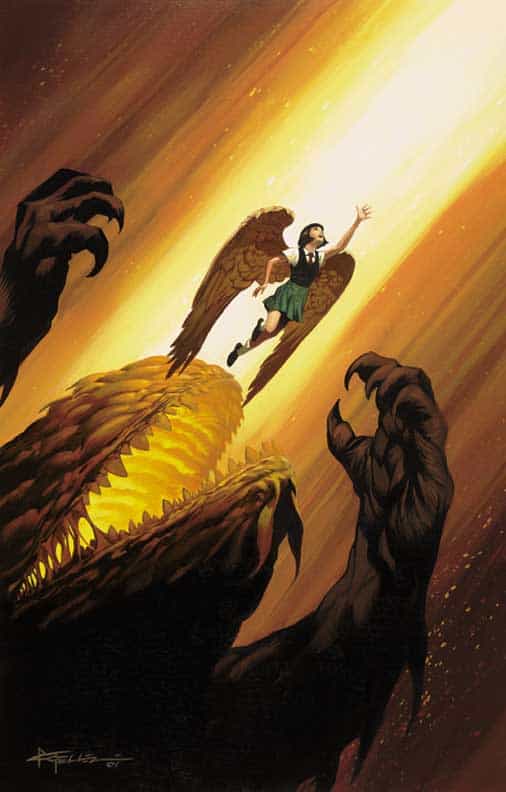 Elaine Belloc’s biological father is the Archangel Michael, who, along with his brother, the retired ruler of Hell, Lucifer Morningstar, support Elaine on her quest.

Unlike any of the other angels who were sterile, Michael was not. Sandalphon began experimenting to create a being capable of birthing angels, which was fulfilled in Elaine. After a long series of battles, and journeys including both Michael and Lucifer, Michael is forced to hand over his demiurgic power to Elaine after he is mortally wounded by Fenris the Wolf. Michael’s death would result in the release of the demiurgic power, which would erase all existence.

Eventually, Elaine acquires the powers and goes on to take over the reins of Lucifer’s and Yahweh’s creations. After merging the two universes, she takes Yahweh’s place as the God of Creation in the DC Universe. 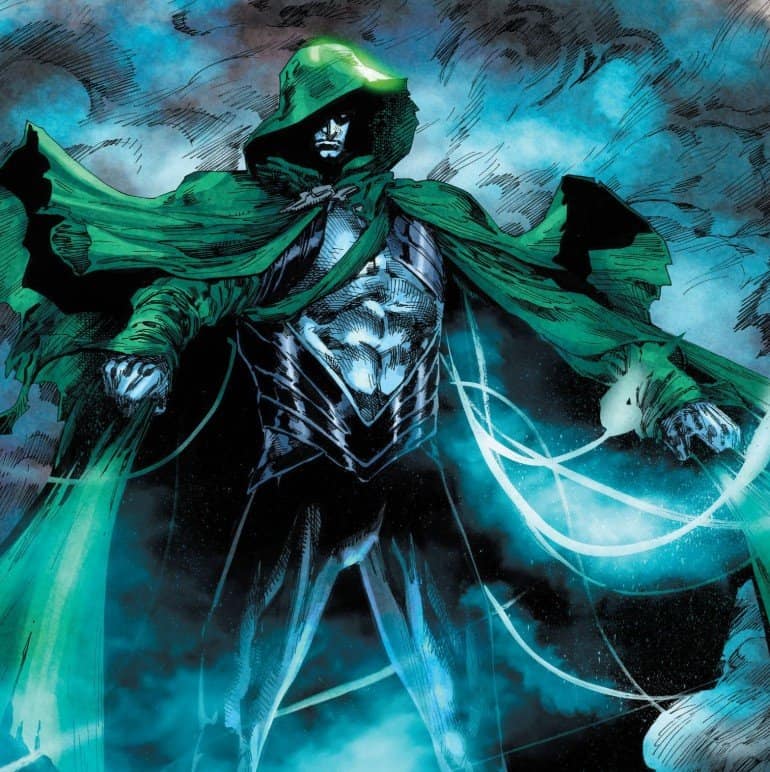 In the DC Universe, the Spectre is an aspect of The Presence, God’s Vengeance. After creation, Lucifer led the rebellion of the angels against The Presence, one of whom was the angel Raguel/Aztar.

Aztar later repented of his sins and, in return, was stripped of his memories and became the incarnation of His Wrath. This was his penance. Now known as the Spectre, he was to replace Eclipso.

The Spectre was accountable for the destruction of Sodom and Gomorrah, the plagues of Egypt, and bringing down the Walls of Jericho, to name a few. When God took on human form as Compassion and Redemption, represented by Jesus, Spectre was not allowed to roam the earth any longer and was cast into limbo until the day of the crucifixion.

Upon completion, the Spectre burst forth on the Day of Wrath, ripping through the world, casting his vengeance on man until Michael informed the Spectre of the new “rules”. From that day forth, the Spectre had to be bound to a human soul to walk the Earth again seeking vengeance. 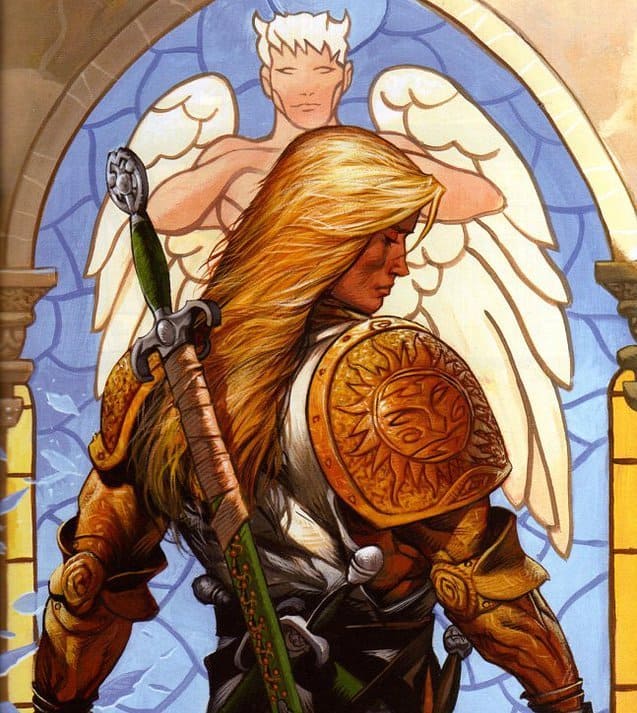 Before any life, even before the DC Multiverse existed, Yahweh the Almighty created two brothers. Alongside his twin brother to Samael, Michael Demiurgos is said to be accredited for the creation of the DC Multiverse.

Yahweh bestowed the two each a gift: Samael that of fire and will and Michael that of creation and Demiurgic Power.

With God’s Demiurgic Power residing within him, Michael is often described to be the most powerful of all God’s created beings. It is also with this Demiurgic Power that God’s name is written on every atom of all creation and, with Samael’s will, they have the power to enable the physical creation of the cosmos to occur. 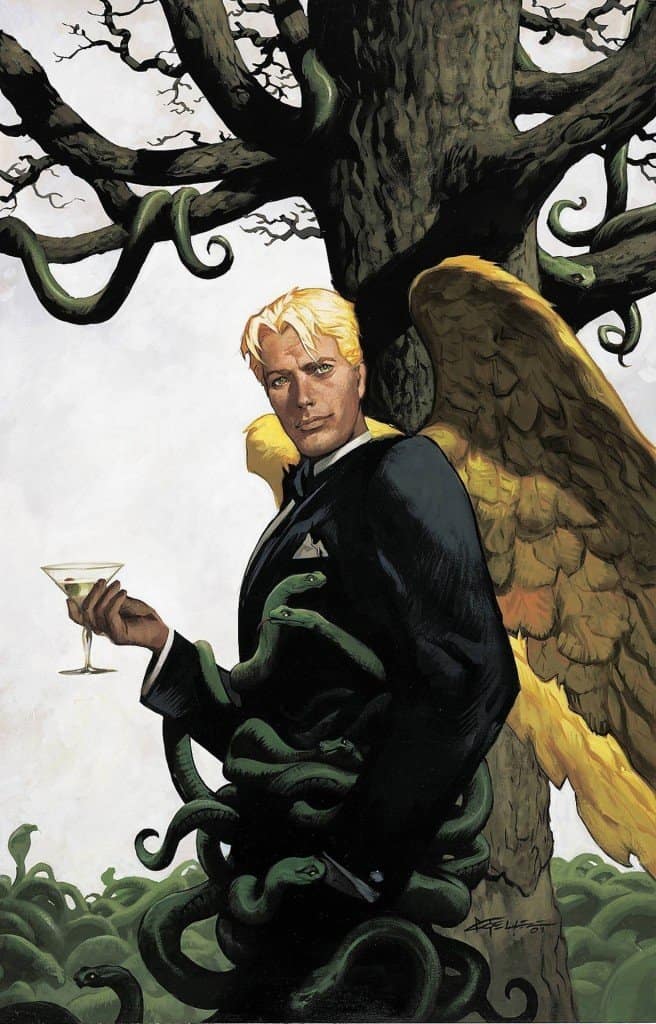 Lucifer Morningstar was once proud and the most beautiful of all the angels.

As discussed above, Yahweh created two brothers (Samael being the eldest). Yahweh had instructed and guided them on how to use their powers to form creation, known as the DC Multiverse.

Samael then turned against Yahweh and led the rebellion of the angels in Heaven, taking on the name Lucifer Morningstar. He was thus sent to rule over Hell after he fell for more than 10 billion years.

After this time, and retiring as ruler of Hell, we see his story pick up as discussed in the storyline of Elaine Belloc above.

Like the Biblical being, Lucifer is one of the strongest and most powerful DC characters — secondly only to The Presence and His light. 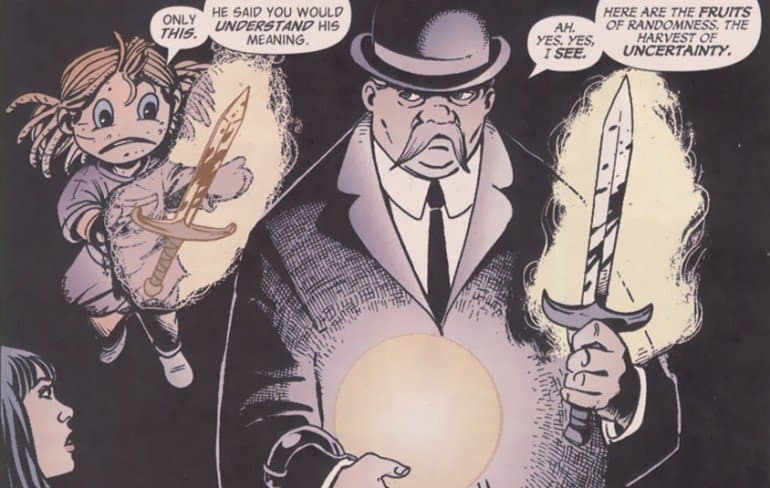 The Presence is the highest form of being in the DC Universe, having created the angels, namely Michael and Samael.

The Presence is known as the God of the Covenant and the creator of the DC Universe and all within it.

He was created by writer Jerry Siegel and Bernard Bailey as the comic equivalent of the Abrahamic God, first seen in More Fun in Comics #52 in 1940. Seldom shown in any comics, The Presence is often spoken about and referred to rather than being depicted in any form.

There is no character more powerful or stronger than The Presence.

Are these the most powerful DC characters? Let us know in the comments.