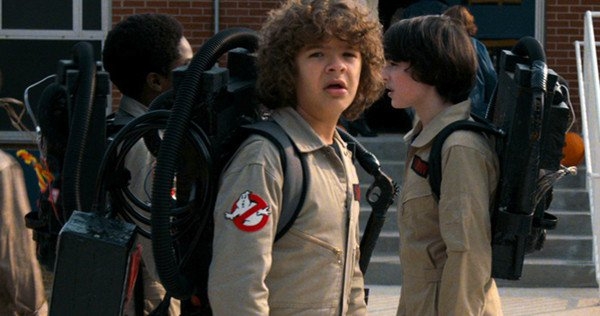 In anticipation of the first trailer for Stranger Things Season 2 being released during the Superbowl this Sunday, Netflix has released the first pic which shows the kids dressed up as The Ghostbusters.

Entertainment Weekly debuted a photo which shows three of the young characters who appeared in the first season, Dustin (Gaten Matarazzo), Mike (Finn Wolfhard), and Lucas (Caleb McLaughlin), dressing up for Halloween (note the orange pumpkin on the far right) as 80s Ghostbusters characters.

It’s been confirmed that the show will take place one year after the first season. 1984 is also the year Ghostbusters was released in theatres. It’s a clever tie-in and will definitely evoke the same nostalgia the first season became popular for.

The #StrangerThings kids are dressed up as #Ghostbusters in this sneak peek at the show's #SB51 ad. https://t.co/gmwbuc264T

Your first look at #StrangerThings' #SuperBowl commercial is here! ? We can exclusively reveal that the #Netflix hit will debut a new teaser during the big game! ? In this image from the ad, Dustin (#GatenMatarazzo), Lucas (#CalebMcLaughlin) and Mike (#FinnWolfhard) are dressed as #Ghostbusters! ? Click the link in our bio for more info. #SB51 ?: Netflix

A photo posted by Entertainment Weekly (@entertainmentweekly) on Feb 3, 2017 at 12:01pm PST

Perhaps this is our first clue that the show will be moving away from it’s Christmas theme in Season 1 which will be replaced by a Halloween theme instead. Producer Shawn Levy offered very brief tease about the story for Stranger Things Season 2:

“The Demogorgon was destroyed but evil wasn’t.”

The official Stranger Things Twitter account also shared a cryptic image. Some have concluded there’s a secret release date hidden within the figures (67-58=9, 50-42=8, and baromatic pressure 30-13=17):

Netflix’s Stranger Things provided a welcomed dose of comforting sci-fi horror nostalgia that transported many fans back to the pop culture of the 80s.

Netflix’s Stranger Things Season 1 is set in Hawkins Indiana in the 1980’s and chronicles the search for a young boy who vanishes into thin air under highly suspicious circumstances. His mother (Winona Ryder) opens an investigation into the boy’s disappearance with local authorities that unravels a series of mysteries involving top-secret government experiments, terrifying supernatural forces and one very strange little girl. A love letter to the ubiquitous cult classics of the 80’s, Stranger Things is a coming of age story for three boys that draws this quaint community into a world where mysteries lurk beneath the surface.’