Home > Movies > Star Wars: The Best Scene from Each Movie We all love Star Wars, but what are the best scenes from each one of the many movies?

Finding a movie franchise as emblematic as Star Wars would certainly be a tall order. Throughout all of its history, Star Wars movies have become synonymous with sci-fi in general, with millions of fans knowing some of their favourite moments by heart. Legendary quotes spoken by even more iconic characters are commonplace in this series, as even non-fans of the franchise would agree on Star Wars’ influence on pop culture. 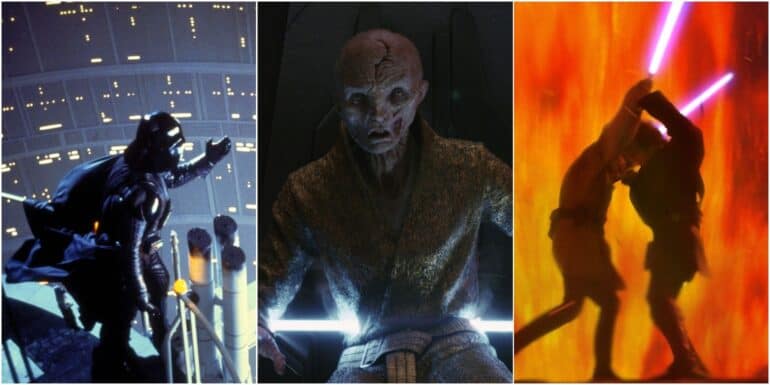 To commemorate the legacy of this far, far away galaxy, we’ve compiled a list of the best single scene or moments in each of the main Star Wars movies.

The Phantom Menace – Duel of the Fates

Episode I gave us our very first glimpse into a battle between seasoned Jedi and skilled Sith apprentices when it pitted Qui-Gon Jinn and Obi-Wan Kenobi against the vile Darth Maul. It was a beautifully choreographed confrontation, set against the masterful backdrop that was John Williams’ Duel of the Fates.

Considering that the rest of the film had a somewhat more childish vibe, the weight of Qui-Gon’s death hits harder as a result. It worked to establish the overall tone of the Prequel Trilogy, and it also showed us what the Republic was like before the Empire.

In the middle of a messy Geonosian battle, the clone army descends upon the planet to help the Jedi fight against Count Dooku’s forces. Chronologically speaking, this was the first time the galaxy ever saw an army of Stormtroopers in real combat. At the time, they were the good guys and not the visually impaired goons of the original trilogy.

This moment holds the distinction of being the closest the Star Wars series had ever been to depicting an actual “war” on land. With blaster fire and lightsabers everywhere, it’s one of the most thrilling moments in an otherwise very dull moment for the franchise.

Revenge of the Sith is a pivotal moment for the Star Wars series. For one, it shows us the very moment the Galactic Empire was created, and it also included the birth of the iconic Darth Vader. As divisive as the prequel trilogy might have been, there’s no denying that Episode III was the moment when everything changed for the franchise.

Order 66 was a secret command that made the clone army turn against their Jedi commanders, effectively extinguishing the Jedi Order. As if that wasn’t enough, a corrupted Anakin was also fighting his master and life-long friend, Obi-Wan Kenobi, to death.

A New Hope – Blowing Up the Death Star

Luke Skywalker was a moisture farmer in Tatooine that dreamed of joining the Rebel Alliance to fight the Empire. When he finds Ben Kenobi and learns the secrets of the Force, his life takes on a new meaning as he discovers the powers that lie inside him.

The journey takes him to fight against the Empire’s superweapon, the Death Star. Capable of destroying entire planets with a single blast, there seems like there’s no stopping this massive cannon. With the aid of the force and the guiding of his Master, Luke manages to destroy the Death Star with a single shot, saving the day and the Galaxy at the same time.

The Empire Strikes Back – Luke’s Father

Spoiler alert for this one! Just in case you haven’t heard of the iconic Darth Vader line. The Empire Strikes Back is widely considered to be the best film in the entire Star Wars franchise, and this might be the moment that redefined what fans believed to be a simple “good vs. bad “ story forever.

In the middle of Luke’s fight against Darth Vader, just when the Sith Lord has him cornered, he reveals that he is Luke’s father, Anakin Skywalker. This shocking revelation challenges everything Luke believed to be true and complicates his fight against the evil forces of the Empire.

Return of the Jedi – Vader’s Redemption

The final film in the original trilogy sees Luke destroying a second Death Star and finally facing Darth Sidious, the galaxy’s feared Emperor. With a little help from Vader, Luke and his father put an end to the Emperor’s reign of terror, as the Ewoks celebrate the impending doom of thousands of people stationed at the new Death Star.

Following their battle with Sidious, Vader has a touching moment with his son. He takes off his helmet to see Luke better, dying shortly after. Redeemed of his wrongdoings through the power of love, Anakin reunites with his old friend Obi-Wan and with Master Yoda in the ongoing celebrations.

In the Star Wars franchise, there’s an odd tradition of chopping off one of the protagonist’s hands. There were no hands cut during the first film of the new trilogy – however, they did cut down Han, one of the most beloved characters from the original trilogy.

Played by Harrison Ford, the smuggler with the heart of gold met his end at the hands of his own son, Kylo Ren. Reportedly, Ford had wanted for his character to die ever since the original trilogy, but he had to wait a few decades before his dream came true, shattering the hearts of millions of fans around the globe.

The life of a Jedi is not an easy one, and considering how hard his life was before joining the Order, is no surprise that Luke had gone a bit disillusioned with the whole thing by the time The Last Jedi takes place. However, there was some fight left inside the old Jedi, as he showed when he faced Kylo Ren.

Surprisingly, Luke didn’t have to leave the comfort of his home to combat the Sith Lord, as he sent a Force projection in his place. This image helped Rey and her friends in their battle against the First Order – the old moisture farmer having saved the day for the last time before peacefully passing away.

The Rise of Skywalker – No One’s Ever Really Gone

The latest entry in the main Star Wars continuity is one of the most divisive amongst fans. For one, it had to undo many of the subversions introduced in The Last Jedi, but it also had to follow J. J. Abrams’s original plan for the trilogy. In the end, The Rise of the Skywalker was a tired film that not every fan of the franchise was happy with.

If there’s one moment that took fans by surprise, that would have to be during Rey’s final confrontation with Darth Sidious. Aided by the powers of Jedi past, Rey finally defeats the Sith Lord and returns balance to the Force. The scene features a handful of cameos from all over the Star Wars series, including voice appearances by James Earl-Jones, Hayden Christensen, and Ewan McGregor.

What are we missing? What do you think is the best Star Wars scene?