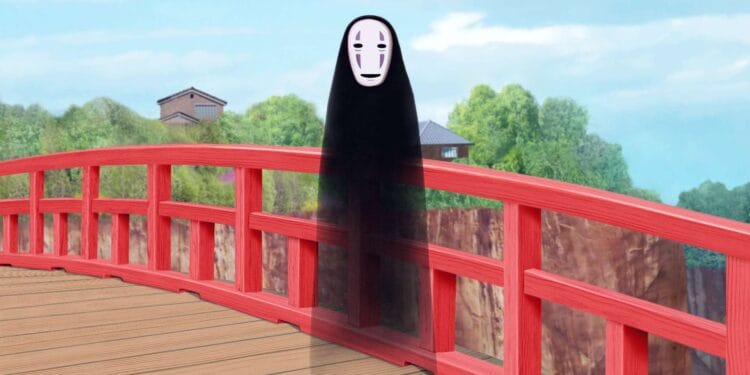 Think you know all there is to know about Spirited Away‘s No-Face? Well, there’s a lot more to the mysterious, transparent spirit character than what meets the eye.

Produced by the very popular Studio Ghilbi in the year 2001, the cult classic Spirited Away, one of the highest-grossing Japanese anime feature films of all time, is also considered one of the most influential films, thanks to its beautiful art style and very intricate underlying themes.

Written by the insanely talented Hayao Miyazaki, the coming-of-age tale explores the connection of the human world with the spirit world. And while there are many intriguing characters in Spirited Away, No-Face, the film’s secondary antagonist, is probably the most popular among fans.

What does No-Face symbolise in Spirited Away?

Spirited Away has aged like fine wine, getting better every time you watch it, with all the charm and magic still present. The timeless plot, the emotional soundtrack, and the incredible art are as magical as the adventure Chihiro has in the film. And if you’ve seen the movie, chances are that you’ve already noticed that this film is loaded with symbolism. Also, Hayao Miyazaki has not been shy to talk about that, on the rare occasions he’s interviewed.

But there’s one character in the film whose entire presence emanates mystery, we are talking, of course, about the No-Face.

So, what is the meaning behind the Spirited Away’s No-Face, or Kaonashi as he’s called in Japan?

The No-Face is an entity with a dark appearance and a ghostly presence. It leaves footprints even though it has no feet at least at first sight, as it’s, later on, revealed it does. Aside from his ghostly presence the most iconic part of the No-Face is its white mask with a blank expression. And even though this mask has a mouth on it, the no face has a huge mouth below on his body.

The entire image of the No-Face is made to hide its meaning, but it also portrays exactly what it symbolizes. As we all know, Spirited Away is full of Japanese traditions and its mythology and folklore, and the No-Face is directly part of this. He is what they call a yokai, which are pretty much supernatural entities and spirits. The Kaonashi is a type of yokai known as Noppera-bo, which are faceless entities that usually take a human shape to try and attract people and cause fear or some other mischievous acts.

According to director Miyazaki, the No-Face is partly like the average Japanese person, always trying to imitate, trying to fit in, wanting more, with greed for more money, and with a huge sense of dissatisfaction. It is part of the society Hayao Miyazaki grew in, the XX Century Japan, but one of the great things is that the No-face meaning is always present and valid in our time.

We could say that the No-Face also represents us, humans, in the world, more specifically us adults. But there’s also a more positive note on the character’s development. We get to see how it transforms from a creature that’s hungry for attention, greeting for more, and completely following its impulses and desires, into a calmer, more mature creature, once it received the attention and love it craved. As closer to the end of the story we see how the character gets to behave and calm itself, it also represents a sign of maturity that comes with the control of emotions and a calmer state of mind.

The No-Face represents the more impulsive, primitive, immature behaviour of humanity, and the desire to be accepted and has attention. Miyazaki managed to represent all of this and a character arc that’s really deep in a character that barely has anything similar to a dialogue, and the message it conveys is as beautiful as the rest of the film.

It is an important part of Chihiro’s journey, as it represents the passing to a more mature way of thinking, it represents getting lost in our impulses, and the greed for love and attention at all costs, and the eventual overcoming of such feelings and behaviours.

1. No-Face’s Footprints In Spirited Away

Of course, this gives rise to the question: Why does No-Face leave footprints when his existence is so hollow and transparent that even the other spirits are not able to detect his presence?

The reason behind this, according to some fan interpretations, is that the footprints exist as proof that the entity was not just a fragment of the imagination of Chihiro.

Regardless of whether or not this is actually true, we imagine the filmmakers didn’t add the footsteps in the film unintentionally.

To non-Japanese viewers, the spirit character is simply known as “No-Face”. However, in Japanese, he has a proper name. His name is “Kaonashi”.

And the name perfectly fits the character too. “Kaonashi” means “Faceless”.

Although No-Face has the ability to absorb other people’s faces around him and inherit their personalities and attitudes, the spirit also has no physical body. Kaonashi has a stretched long black transparent (shadow-like) form that seems empty and could be filled up with the thoughts and feelings of the people he absorbs.

From the very beginning of Spirited Away, No-Face is always considered and mentioned as “He”. However, after further analysis (and an unhealthy amount of multiple viewings), it can be concluded that this spirit is actually genderless.

This fact becomes acceptable when we consider that the anime character wears a mask that doesn’t have any features that will associate him/her with any gender.

In short, No-Face is just a spirit wandering around.

Ancient Japanese folklore about yokai and other supernatural beings suggests that there is a faceless ghost that resembles the No-Face character.

A Noppera-Bo disguises itself as a human but doesn’t pose a threat to humans. Instead, they enjoy teasing and trolling humans. According to folklore, these spirits approach their victims in disguise, usually as a person they know, and make them comfortable before they terrify them.

It would be no surprise if Miyazaki drew inspiration from this when creating No-Face.

When Miyazaki was asked about the inspiration behind the massive gluttony of No-Face in Spirited Away, he revealed that he was inspired by the film Babette’s Feast.

No-Face is not the only greedy being in the film either. Many of the anime characters have a hard time controlling their appetites, for some reason. Even Chihiro’s parents are transformed into pigs due to their gluttony.

6. His Mask Hides Something Horrendous

Look closely and you’ll notice that No-Face’s mask is actually a piece of aesthetic Japanese art.

His mask also contains a mouth that changes its shape with his mood. However, the mouth doesn’t belong to No-Face but it hides his fearsome molars, which he only shows when he is about to devour people.

But don’t worry, these molars don’t do any grinding on the swallowed people. In fact, many are able to get out unharmed from his hellish mouth.

While No-Face is not entirely famous for his voice, he does have a few lines in Spirited Away.

If you listen carefully, you’ll also notice that whenever No-Face appears on the screen Balinese Gamelan music is to be heard in the background.

No-Face has a unique ability that allows him to exhibit the abilities and personality of his prey. This ability is showcased when he swallows Aogaeru (a frog wearing blue kimono). Kaonashi develops frog-like legs with which he uses for his movement. He could even communicate in the swallowed frog’s voice.

As a lonely spirit wishing to connect with others by eating and gaining their personality, he swallows a bathhouse employee and impersonates him to gain the attention of others, mainly the affection from Sen/Chihiro.

One theory is that No-Face is actually a human being trapped in the Spirit World with no way out. His transparency, along with the see-through nature of Chihiro when she first enters the Spirit World, and the transparency of the passengers on the train, is what people use as evidence to support this particular theory.

Another crazy theory is that No-Face is actually symbolic of child slavery in Japan. Strangely, this theory has not been denied by the writer of the film.

If you are a die-hard Star Wars fan there is probably a chance that you have played the globally acclaimed game called Star Wars: Knights of the Old Republic II: The Sith Lords. If that is the case, then you might be familiar with Darth Nihilus, the Dark Lord. Well, No-Face served as an inspiration for the character design of the Dark Lord of the Sith.

The resemblance is uncanny. The only real difference is that Darth Nihilus’ mask makes him look more frightening and expresses his hatred perfectly.

How many of these interesting facts did you know? Do you have a bigger appreciation for Spirited Away’s No-Face?