A Look Back At RoboCop, The Demented Love-Child Of C-3PO And Rambo 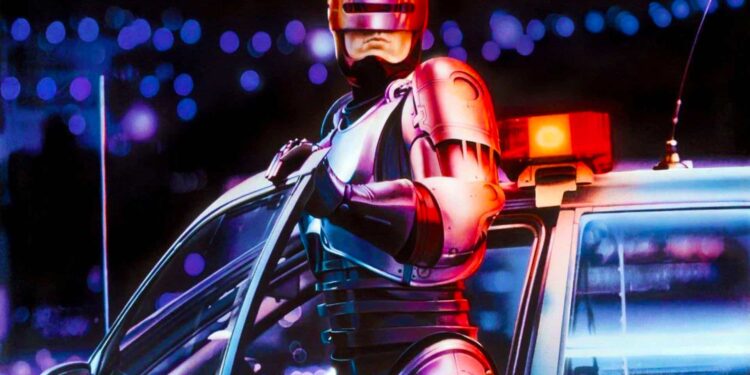 Well, all cop except for how he eats baby food instead of doughnuts. But dammit, the original RoboCop was one cool cat. In a decade of excess, he was the gun-toting heavy metal hero that every red-blooded fan of ultraviolence loved. It didn’t matter that he looked like the Tin Man from the Wizard of Oz and moved only half as well, he shot first and asked questions later. Assuming that he left anybody alive, of course, because this film’s version of a police procedural was to shoot and punch bad guys – and to hell with the paperwork. What more could anybody want? Even the poster for the film says it all. You know it’s going to be cheesy, like watching some demented love-child of C-3PO and Rambo, but you also know that it’s going to tap into that part of your brain that never developed past the age fourteen. Which, as luck would have it, is how old I was when I first saw this film –  which had an age restriction way higher than I was technically allowed to see. But then, I hadn’t been allowed to watch Evil Dead 2 or lots of other films I’d seen, and kids will be kids… and please bear with me while I get something off my chest quickly.

The idea of kids watching films above the allocated age restrictions is a big no-no in today’s society. Parents want to protect their kids, and as a parent I understand that. However, I also believe that there’s more outcry from parents who personally perceive things as being offensive, rather than from kids who are genuinely offended. I grew up in the ‘70s and ‘80s, a time when “family films” had genuine attitude, and I turned out just fine. Hell, in Ghostbusters Ray gets an erection (and more) from a ghost, while Venkman swears. As a kid I wasn’t offended, I thought it was the funniest thing I’d ever seen. In my opinion, kids can handle more than adults think… and they tend to get up to mischief one way or the other. Me, I got up to mischief and watched RoboCop. And damn, it was hardcore. It was also completely awesome.

The story is simple: Regular cop Alex Murphy gets killed by a group of drug dealers. However, he gets resurrected by some corporate busybodies who now own Detroit’s police force, and they’ve been tinkering around trying to create a robotic police force to replace the overwhelmed flesh-and-blood cops who keep talking about going on strike. And so Murphy is reborn as a cyborg known only as RoboCop, the future of law enforcement. He’s also the future of kicking mass quantities of ass.

Except things aren’t as simple as they seem. RoboCop keeps flashing on the memories of Murphy, which prove that somewhere deep inside that metal body he may still be human – and before long he starts gunning for the drug dealers who killed him. After beating the truth out of enough of them, he discovers that the criminals are in league with Dick Jones, the Vice-President of OCP… the company that made him. Except owing to his programming, RoboCop can’t arrest Jones or harm him in any way. With Jones realising that RoboCop is on to him, he pulls out all the stops to destroy our hero. As a plot, that may sound rather simple but the finished product is a work of brilliance. Even as a kid I knew that I’d seen something special. There’s a huge amount of snarky social satire in it, some way ahead of its time. It discusses genuine problems like corporations “buying out” bankrupt cities and governments (the setting of Detroit is perfect to reflect this), the criminal undercurrent inherent in a “perfect” upper-class society, and handles the aspect of what it means to be human when you’re a machine as deftly as Blade Runner or Ghost In The Shell. Even the use of violence is so over-the-top that it’s more comedic than offensive.

It wasn’t until I grew up a little that I realised it was even more than I thought. It’s a religious allegory. It’s Judge Dredd, before most people in America realised who and what Judge Dredd even was. It’s a left-wing liberal film which cleverly disguises itself as a right-wing fascist display of might meaning right. It’s a satirical comedy. It’s a cop film. It’s a drama. It’s sci-fi. It’s a 102-minute cyberpunk music video. It’s also probably the only film that pays homage to 1977’s The Incredible Melting Man. It doesn’t surprise me in the least that it got a decent (but unappreciated) sequel, a dismal TV show, another sequel, a remake, and even a kids’ cartoon series… although that last part is pretty ironic, given that there’s no way any kids like me should have even known about the character. It got turned in to a bunch of computer games too, and I pumped my coins into the arcade machine regularly just to blow up ED-209. I even played the old ZX Spectrum 48k version and loved it, despite it having such bad sound that every time RoboCop said his own name it sounded like “Applecart”.

In spite of all those things though, at heart, Robocop is just a damn fun film.

Watching it again, it doesn’t quite hold up as well as it could have, although it’s debatable if the filmmakers thought at the time that it would ever be considered a classic anyway. Everything from the fashion to the technology reeks of the ‘80s yet it’s still clearly sci-fi, giving it a retro-techno vibe. The story, the performances and the overall presentation truly make it special though, and those haven’t aged a bit. It may not quite be as brilliant as you remember it, but it’s still excellent.