I’ve always despised the term “flawless victory”. It means that everything is too easy and you haven’t suffered enough for the ultimate taste of success. In much the same way, Simon McQuoid’s Mortal Kombat (2021) doesn’t come out unscathed, but damn, you’ll be grinning through your blood-stained teeth by the end of it.

If you’ve played the games, you know the deal.

Earth’s mightiest warriors versus Outworld’s douchebags where the fate of the universe is decided in a Mortal Kombat tournament. In this reboot, this is still the basic premise of the plot and it’s easy enough to grasp. How the fighters are chosen, though, has changed. You can’t just click accept on the Facebook invitation from Raiden, but I’m not about to spoil the terms and conditions here either.

What I will say is that this film takes place before the actual tournament. It’s a rallying of the troops, where the audience gets to meet the Kombatants and find out more about them. Sometimes, it does feel quite rushed as not every fighter gets a well-rounded intro, but it’s far from the overstuffed Mortal Kombat: Annihilation where characters just appeared for the sake of it.

The conflict between Sub-Zero (Joe Taslim) and Scorpion (Hiroyuki Sanada) takes centre stage, with most of the events in the film tied to them in some way. The ice warrior is an absolute monster here. Whenever he appears on screen, you get the chills (pardon the pun), because you know something is going down. He’s an OP character and finally given the big screen respect that he deserves. Plus, the fights between the two ninjas are just *chef’s kiss*.

Josh Lawson’s Kano is also a standout in Mortal Kombat (2021).

In terms of comic relief, he provides the side-splitting lines that everyone is thinking in the moment. Looking at how the character was written, it’s easy to see why Johnny Cage wasn’t included since they’d be too similar. I’ll not say anything else about Cage, because… Just watch the movie.

And for those worrying that Ludi Lin‘s Liu Kang would be a jobber here, rest assured. He actually plays a pivotal role in training the fighters and preparing them for what’s to come. It’s more classic Liu Kang than even current iterations of the character, focusing more on the Shaolin Monks dynamic that he has with Kung Lao.

There was a lot of debate about Lewis Tan’s Cole Young character when he was announced; however, he feels like a total natural in the franchise. While his legacy is uncovered, his powers and move sets are unique. Plus, Cole’s journey has the emotional hook to resonate with the everyday man. Don’t be surprised if you see him included in a game or DLC in the future.

Of course, you’re tuning into Mortal Kombat (2021) for the fight scenes, right?

Well, here’s the good news: it delivers in buckets. The fatalities are just as gruesome as you’d expect, with Kung Lao’s in particular being a “whoa” moment, but it’s the hand-to-hand combat that stands head and shoulders above everything else here. The amount of work that went into the choreography and stunt work is beyond impressive. You can see it’s a group of martial artists performing their own fights on the screen and not just quick hack-slash edits or CG doubles. You’ll even forgive the ridiculousness of the story’s plot twists, because the action leaves you satisfied.

That’s the thing about Mortal Kombat: While it’s technically a “Hollywood” blockbuster, it plays out more like an action film you’d expect from the genre’s heyday. The story might feel secondary at times, but you can’t deny the sheer joy and madness of it all. You get sucked into the fun aspect of it, rather than question every detail.

Plus, it feels like true global representation and diversity on screen

These are talented performers chosen to be here on merit, and not because of stupid Hollywood nonsense such as nepotism or “marketability”. Much like the actual tournament, every single actor earned their spot. Additionally, it’s good to see that the filmmakers allowed the two leading characters, Sub-Zero and Scorpion, to speak in their mother tongues throughout their scenes, since it’s about time that big productions embraced different languages besides English.

As mentioned in the intro, Mortal Kombat (2021) doesn’t come without its knocks. From pacing issues to lack of character development and strange editing, it isn’t just a quick win. Yet, despite the occasional blow, the film still keeps kicking and comes out victorious in the end. Sometimes, you just need to watch a movie where a character freezes another one’s blood and stabs him with it. 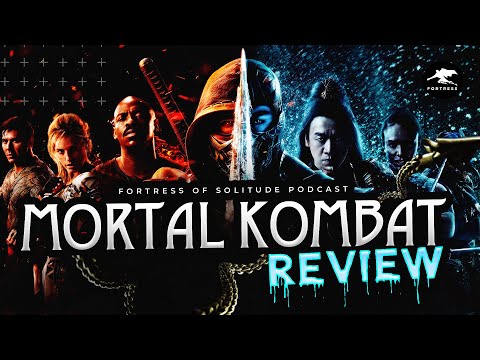