I first came across writer & rapper Jason Geland last year as he prepared for the launch of his latest work, The Souvenir, a unique comic dealing with various threads of myth & folklore surrounding the Cape of Good Hope set in the 17th century of an alternate world.

The mouth-watering artwork by Daniel Hugo paired with Jason Geland’s elegant, rhythmic prose made for an engrossing read and it surprised few to see the book featured at the 2014 San Diego Comic Con, a some short months after its successful debut at Free Comic Book Day. The story has recently made it onto the famed pages of the one and only “Heavy Metal Magazine”. Our last interview with him was centered on his book and what readers could expect from it. This one, however, is all about the inner-workings of the creative force known as Jayson Jupiter (Jason Geland).

1) What got you into the world of comics and comic writing?

Jason Geland: Comic books have always been a part of my life. When I was a kid my father’s job necessitated that he spend lengthy spells travelling between provinces and, being a fervent reader himself, he’d often visit a number of small bookstores along the way, picking up everything from classics, bulky volumes of poetry & yellowed paperback pulps with which to remedy the tedium of long distance driving. It was there that he came across comics, grabbing copies of whatever he unearthed to bring back home as gifts for my brother and me. I was hooked immediately, utterly hypnotized by the ceaseless array of possibilities depicted by those early encounters with the medium. Diving deep into these enticing, illusionary panoramas & the heroic or devious exploits unfurling therein, I discovered through the panels of comics a veritable escape from the drudgery of routine life; an ever-widening portal to worlds unknown, characters unencumbered by human limitations & entire histories poached from the realms of the imagination. It’s an addiction that’s endured to this day.

When I started writing some years ago, it seemed only natural that I gravitate towards comics as a channel for the kind of stories I wanted to tell. My first printed work can be found in Gaining Velocity Graphic Anthology (issue 2, 2012) Those initial forays into the spheres of comic book fiction, however, jaunty or amateurish, allowed me to make sense of the stringent reality I inhabited with the added chance to fashion new worlds, new realities – in short, I simply couldn’t resist.

2) As a writer who inspires and influences the way in which you write?

Jason Geland: As far as any discernable literary influence goes, these are multifarious & always mutable. I am just as influenced by the Marquis De Sade, William Blake, Carl Jung, Dylan Thomas or Ezekiel Mphahlele as I am by Robert Sheckley, Robert Anton Wilson, Octavia Butler, Clive Barker & Peter Milligan. The list could go on indefinitely. In truth, every impression of art I come across influences me in some or other way & it‘s impossible to pinpoint exactly how a scene from a David Lynch film, a Marjorie Cameron painting or a J Dilla instrumental might inform anything I’ve written after exposure to it – what these contrasting inputs might trigger could be completely removed from their original aesthetic – in this way do I remain continually stimulated & inspired to generate fresh content.

3) How do you create concepts and decide on what to write?

Jason Geland: It’s different each time. For example, I might record description derived from a recurring dream I’ve had this week, which I’d only find a way to utilize in a story of my own years from now. An article found in a newspaper or online could prompt me to produce commentary on similar issues in the form of a comic. Alternatively, I could receive a brief for an on-going title & after some reflection, filter my energies into a particular direction to engender subject matter relevant to its aims. Deciding on what to write isn’t something I do consciously. I believe in keeping things organic. This ensures authenticity. While I may have several concepts circulating my psyche at any given time, a lot of what actually ends up on paper more or less hinges on what I finish first as opposed to any wilful attempt to complete any one story.

4) Can the artist influence your writing? Surely working with different artists can never be easy. So, how do you adapt?

Jason Geland: The artist ALWAYS influences my approach. Once I’ve agreed to collaborate with someone, I make doubly sure to ask them what they’d like to draw & will subsequently spend long hours gazing over their prior work to ascertain their strengths & preferences, which I’d then accommodate in the resultant script. For example, should the artist feel most comfortable with black & white, I’d devote more scenes to darker, shadier backdrops, playing with light to create tension. If an artist is partial to a bold, rich palette I would then consider imagining buoyant, extravagant landscapes & commanding, spirited characters to compliment their style. Every collaborative comic book story is reliant on the level of understanding the writer or artist has of their creative cohort; there’s an implicit need for an emergence of styles, an unhindered union of image & word in order to convey the shared visions of the authors.

Jason Geland: The recent influx of local creators & spike in the amount of local work being produced has been encouraging to observe. It’s broadened the scope of our stories, imbuing them with unprecedented diversity, which can only be healthy. Traditionally, the bulk of South African comics have primarily dealt with the convoluted turbulence of our chaotic political history & its murky aftermath, or served as a review thereof, something I believe was always to be expected & was, to an extent, almost obligatory. Now we’re seeing something altogether else. For the first time South African comics can boast a wealth of previously unexplored subject matter spread across a vast range of genres, as evidenced by such titles as ‘Echo Gear‘ – Vincent Sammy’s wonderfully fragmented & poetic Sci-Fi yarn, ‘Kwezi’ – Lwazi Khunene‘s bold & remarkably well-received superhero saga, ‘Nero’ – Billy Pineapples’ tale of a genial but troubled software designer traversing a futuristic Durban beset with bizarre drugs & mean corporations, ‘Wrath’ – Chris Beukes’ witty dystopian romp, ‘Salem Brownstone’ – Nikhil Singh’s intricately rendered sprawling gothic opus, in addition to the seriously impressive efforts of Deon De Lange (Tomica), Louis Tolosana (Falcon Comics) & Ben Geldenhuys & Danelle Malan (CottonStar).

While I’d agree that South African comics is on the cusp of a new wave of ingenuity, I maintain that there is still much to be done. We need more on-going publications like ‘Gaining Velocity’ which provides a much sought-after platform for new creators to showcase their abilities & in turn more prospective creators should look to self-publish their work instead of waiting around in the dim hope that it’ll end up in print one day. There is no time for complacency. A constant barrage of new stories is the only way for this burgeoning scene to edge out a distinctive, contemporary identity for South African comics & only in so doing will we be able to discover the true summit of our potential.

6) How did you come up with the story for “The Souvenir”?

Jason Geland: I’d been wanting to write a story about Cape Town & during a meeting Dan began telling me about a concept he’d been mulling over for some time – what would a revision of the famous Van Hunks myth look like as a comic? I was keen on the idea & from there we went about looking for other local myths to include in the story, reinventing archaic characters, breathing new life into near-forgotten fables. The central lure for me was the opportunity to reintroduce these characters & situations to an uninitiated audience – There’s a surprising number of locals out there who are completely oblivious to most of Cape Town’s myths & folktales, something I thought a story like this could help to fix.

7) What driving force led you to select Daniel Hugo as the artist to bring your script to life?

Jason Geland: Not only is Dan one of the kindest people you could ever wish to meet, he’s also a terrific illustrator whose immense body of work flaunts an astute grasp of sequential narrative. I think you’d be hard-pressed to find anybody on Cape shores as passionate about comics produced either locally or internationally. A rare talent in a country not usually known for the feats of its comic book artists, he continues to astound with unrivaled consistency, a real storyteller through & through. Everything graced by the tip of his pencil turns to gold, indicative of his staunch work ethic & unremitting enthusiasm for the medium. I’ve learned lots from working with him for which I’ll always be grateful. To answer your question, there was no selection process. Having worked on a story not too long before, we conceptualized ‘The Souvenir’ together, building it brick by brick until we were both satisfied with the shape & feel, only then was I tasked with scripting it.

8) As mentioned earlier, “The Souvenir” will be featured in an issue of Heavy Metal Magazine. Which issue can it be found in?

Jason Geland: The story can be found in issue 237, available for purchase online or though committed local distributors such as Reader’s Den Comic Lounge in Claremont.

9) How did Heavy Metal Mag end up selecting your work to be showcased in their popular magazine?

Jason Geland: It was submitted to their editorial team who then deemed it worthy of inclusion in their current installment.

10) What was your first reaction when you found out your story is being selected for Heavy Metal Magazine?

Jason Geland: I was over the moon! Many of my all-time favourite comic book creators & stories have been featured in preceding issues of their illustrious magazine & now to be able to claim the same of my work is in equal measures both humbling & inspiring.

11) Are there any other titles that you are busy with at present?

Jason Geland: After completing ‘The Souvenir’ I took some time away from writing, in general, partly to focus on other creative endeavors & partly to overcome certain difficulties of a personal nature. So it’s with no small relief that I find myself with new comics to write, some of which should be available later this year. To put it as plainly as I know how, reacquainting myself with comics has been a lot like rekindling an old flame decades after an unforgettable steamy dalliance – all the things I first fell hopelessly in love with are still extant & are every bit as endearing. Without revealing too much, followers of SA comics can look forward to collaborations with super-talented illustrator Rayaan Cassiem, the evergreen Moray Rhoda, gifted graffiti & conceptual artist Jonny Koel & perhaps another short story or two with Dan. 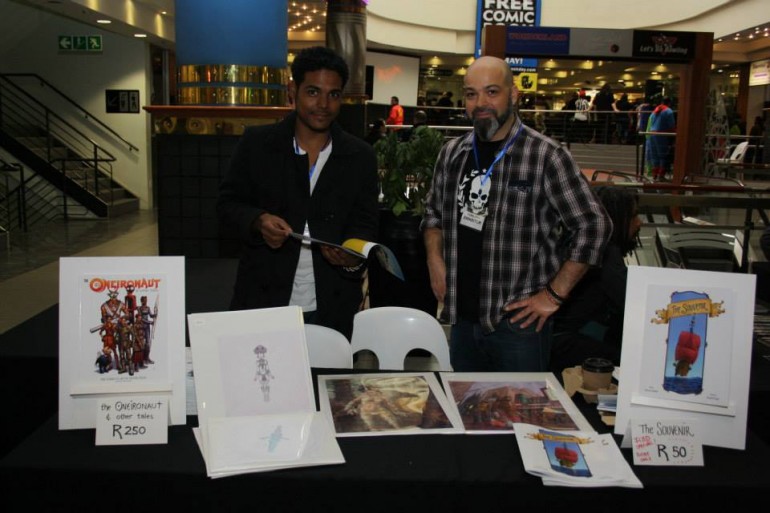