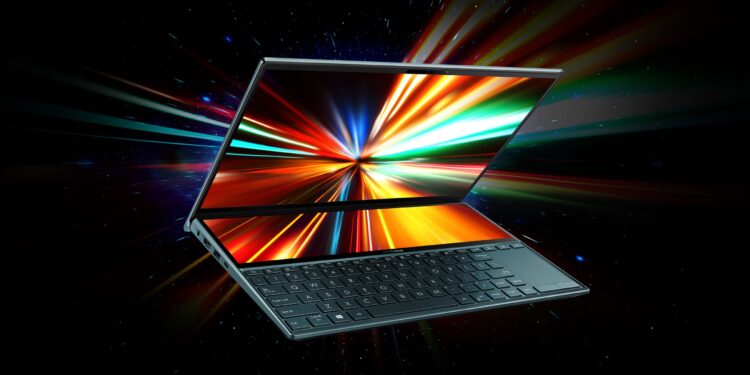 A few weeks ago, I reviewed the ASUS ROG Zephyrus Duo 15 GX551. The powerful gaming laptop made the most of its second screen, opening up a world of new functionality for gamers. As a follow-up to the gaming unit, I received the ASUS ZenBook Duo (UX482) for review.

The two laptops have the same dual-screen approach, but couldn’t be further apart when it comes to their build, specifications and overall performance. It’s worth noting that the ROG Zephyrus Duo 15 was built with gamers in mind, which would factor in their peripherals and the likes.

The ASUS ZenBook Duo UX482, however, falls into the category of a business laptop. This changes the dynamic of its use case and how each of the elements adds to the overall experience. 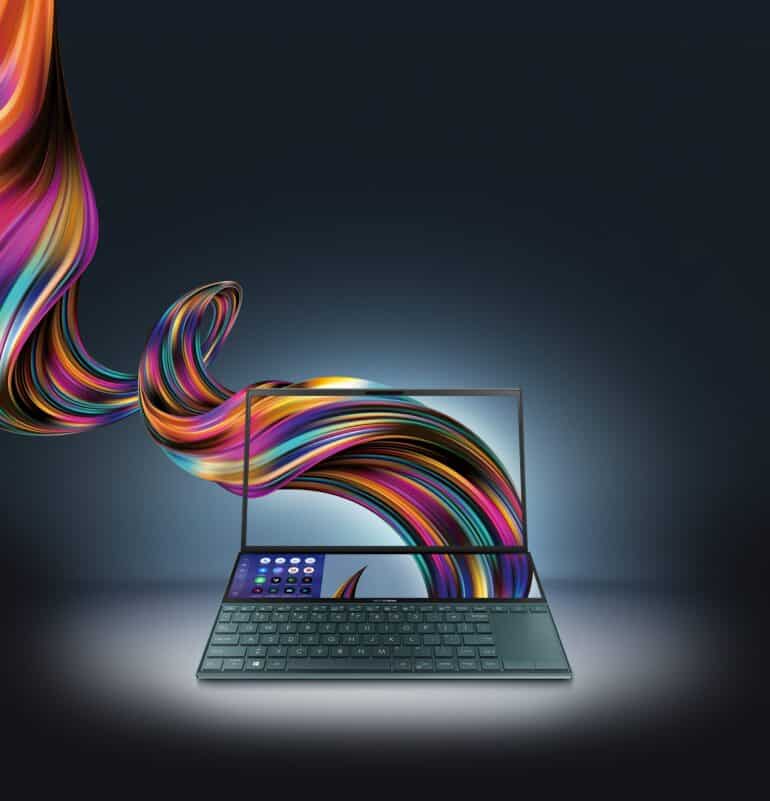 While the ROG Zephyrus Duo 15 has a relatively straightforward build and design, it’s not quite the same for the ASUS ZenBook Duo. The unit has a far sleeker build but has a few additional technical elements that add a bit of flair.

It’s all about the hinges. There are two notable hinges to factor in here. The first, as with the ROG Zephyrus Duo 15, is for the dual-screen. As you lift the lid of the laptop, the second screen also lifts slightly, to be angled towards the user. Adjusting the main screen, then, also adjusts the second screen slightly.

The second hinge in question isn’t available on the Zephyrus unit. This is known as ErgoLift. The idea is simple, to lift the laptop off a flat surface. This not only gives you a supposed better angle at which to use the keyboard but also allows for better airflow underneath for optimum cooling.

On a desk or surface, I had no qualms about the design. It worked well. However, moving to the couch for portable use wasn’t as comfortable. The hinge is quite narrow, creating a sharp point where quite a bit of the weight rests. This digs into your lap and, after a time, starts to become uncomfortable. I added a cloth underneath the laptop to prevent this but would mean I’d need something similar when travelling.

Being designed for more portable usage, the ASUS ZenBook Duo weighs about 1.8KG. It measures 323×22.3x19mm. It’s not the lightest and most compact around, but there’s significant streamlining compared to the bulkier Zephyrus Duo unit. It’s also about 300g lighter than the original ZenBook Duo from 2019, which is useful.

As with any dual-screen laptop, there was bound to be some compromise. The keyboard is more compact with the trackpad moving over to the right-hand side of the layout. This also means that removal of the palm rests. Having gotten used to the keyboard on the previous review, it wasn’t as big of a hurdle to jump over. Using the configuration for gaming, I had my own keyboard and mouse at the ready, which made things much easier. Now, reviewing the unit as it’s meant to be operated, as a business laptop, I really wasn’t thrilled about the narrow trackpad. On the best of days, I’m not a fan of trackpads. So, it was rather painful to try to get through my usual activities on the updated design.

The rest of the design is fairly minimalistic. This follows the trend for most business laptops, opting for a sleek and ‘plain’ approach. 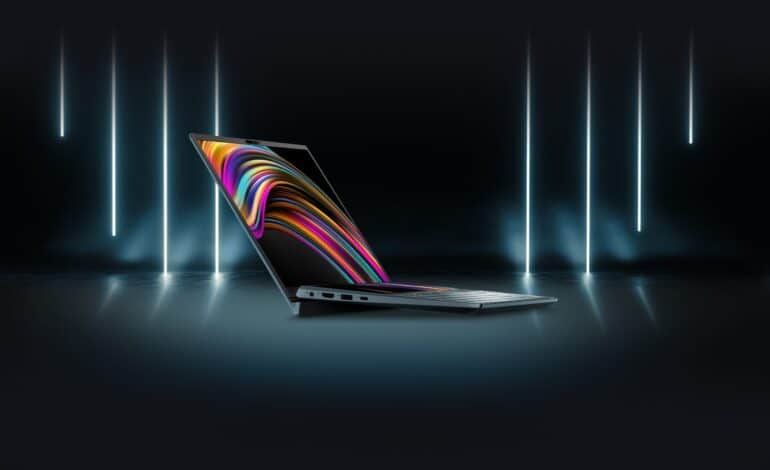 As with the ROG Zephyrus Duo 15, the ASUS ZenBook Duo has you covered in the ports department. It’s not quite the same configuration but covers most of the essentials.

On the left-hand side, the unit sports (from the rear) a DC-in, HDMI port, USB 3.1 port and USB 3.1 Type-C port. Switching to the right-hand side, you’ll find a microSD card, audio jack and second USB 3.1 port.

There aren’t any additional ports on the rear, but these are sufficient to get the job done. 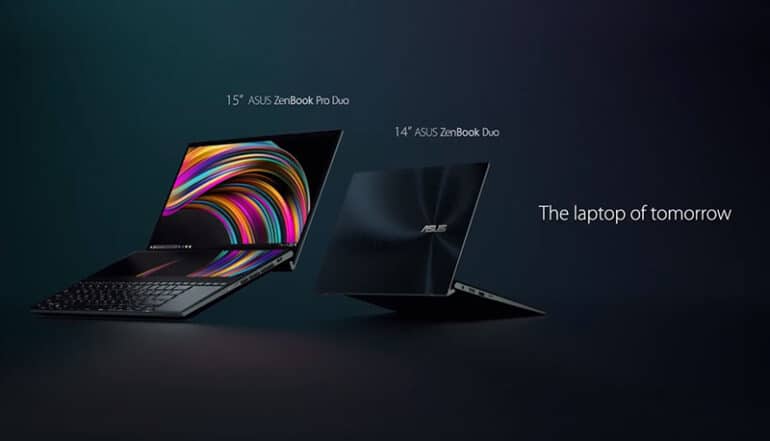 What’s great about the ASUS ZenBook Duo is that it sports touchscreens for both the primary and secondary panels. The primary screen is on the smaller side, measuring 14” across. This aids its compact approach for ultra-portability. It’s an LED-backlit panel with NanoEdge display. The display has a 1920x1080px resolution, which is standard for units of its size.

The NanoEdge approach means that its bezels are quite slim. It measures just under 3.5mm on the sides and has a 90% screen-to-body ratio, which is great.

Unlike the Zephyrus unit, the primary screen doesn’t feature higher frame rates of 300Hz and 120Hz. It uses the standard 60Hz panel instead. That said, the touchscreen capabilities make up for this lack of an additional frame rate. With the addition of the ASUS stylus in the box contents, there are quite a few more possibilities to explore. Pre-installed on the unit ASUS handwriting software, which means it can easily detect your writings to convert to text.

The secondary screen, or ScreenPad Plus 2.0, measures 12.6”. While I used the second screen for game-related tasks when reviewing the Zephyrus Duo, I used it for more practical tasks on the ZenBook Duo. Here, you can move browser windows, music players, and even the doodle app, where you can copy your scribblings to text into your documents. It’s simple and easy to use.

The only thing that was a bit tricky to manage was how much pressure I was able to operate with when writing on the secondary screen. Given that there’s no room for palm rests, you can either deactivate the keyboard or use the screen itself for this function. It did a great job in picking up which touches were meant when using my finger versus my palms resting on it. Needless to say, however, I needed to screen the screen more often when doing so. 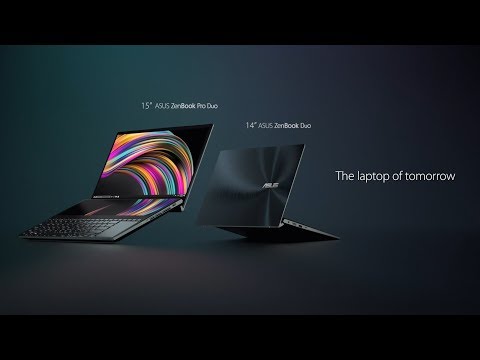 In terms of the specification, there’s quite powerful hardware under the hood. Firstly, it includes the Intel 11th-generation Core i7-1165G7 2.8Ghz CPU. This is paired with 32GB DDR4 2666Mhz RAM.

The CPU has a built-in GPU, which uses the Intel Iris Xe graphics. For those who require a bit of a boost for additional processing power for editing, there is an option for an NVIDIA GeForce MX250 GPU. It doesn’t carry AAA-game-level support, but it gets the job done.

Further on the specifications list is the 1TB NVMe SAMSUNG SSD. The model is MZVLB1THBLR. Users do have the option of opting for lower-specced storage of 256GB and 512GB.

The ASUS ZenBook Duo UX482 includes a 70Wh 4-cell lithium-polymer battery. Alongside this is the 90W power adapter.

To complete the list of specifications, it comes pre-installed with Windows 10 Home 64-bit.

When it comes to its performance, the ASUS ZenBook Duo won’t let you down. The 11th-generation Intel Core i7 CPU breezes through each of its tasks. You can open quite a few tabs and have them load simultaneously and not have any issues in processing, nor any visible lag or jitters to speak of.

Given the use of its built-in Intel GPU, there aren’t any notable aspects to write home about regarding gaming. For the most part, it is capable to run most games, but how much you get in the way of gameplay and frame rates above the 30FPS mark on AAA titles is anyone’s guess. If that is a requirement for you, best look at alternative options.

With 1TB of storage (with various options) and 32GB memory (minimum 16GB), there’s also great performances in this regard. The NVMe storage makes for speedy loading of files and software. It’ll boot up really quickly and multitask with ease, even when constantly switching between files and programmes. Performances also don’t reduce when using apps and software across the two screens.

There are quite a few factors to consider when it comes to the battery life of the ASUS ZenBook Duo. This includes the use or not of the second screen, as well as the brightness for both screens. This could be a difference of some two hours between various settings.

Overall, the 70Wh battery does a great job. It averages around the 10-hour mark under most loads. This means that you should be able to make it through an average day in the office, or being on the road, without needing to charge your laptop.

Switching to 50% brightness with both screens in operation, multiple windows open on the browser and streaming a video, the unit is capable of reaching that 10-hour mark with ease. Turning up the brightness to full, you’ll lose about an hour. Switching the second screen off entirely, you’ll increase the battery life by over two hours, reaching between 12 and 13 hours of use. You will, however, lose some of the functionality of why you have purchased it in the first place.

Once the battery has been depleted, it takes about 150 minutes to charge. That’s fairly decent, all things considered. What’s great about the unit is that it can also be charged via the Type-C port, as most modern laptops are capable of. This is great for when loadshedding hits and you’re still able to utilise the unit via a power bank if you needed a quick charge.

Should You Buy the ASUS ZenBook Duo?

This is a big question when it comes to any dual-screen device, even smartphones. Unless you’re going to have dedicated use cases for it, it becomes more of a gimmick and mild performance gains than actual worth. It has a lot of useful functionality and makes productivity easier when requiring to use multiple tools or files when completing work, especially when you’re on the go and don’t have connectivity to that monitor.

At a price of around R30,000, it’s quite decent. That said, this is around the price point for some entry to mid-level gaming laptops, so that’s always something to factor in. There’s a lot to consider about the ASUS ZenBook Duo – it has a number of useful features, but may not always be utilised by all.

The ASUS ZenBook Duo UX482 is a great dual-screen laptop. It offers great features, great performance and solid battery life. You won’t be left wanting when it comes to completing daily tasks. However, its pricing falls within the mid-level gaming laptops, with gaming not supported with its built-in Intel GPU. It’s not an easy choice to make, then.