The Ghost and the Darkness Still Haunts Me Today 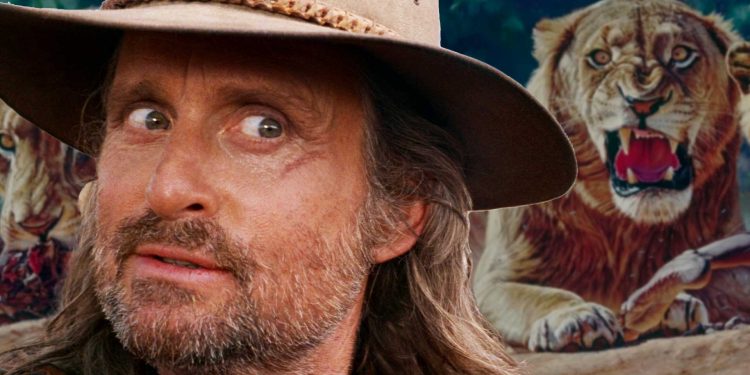 It would be a tall order to find some filmmaker who would be willing to film a horror movie featuring lions, and yet, somehow, Stephen Hopkins was up to the task with 1996’s The Ghost and the Darkness.

Almost every film that features killer animals front and centre as an integral part of its narrative has to do with sharks or some other form of unseen aquatic species. Sure, the sea hides some of the most horrifying creatures known to man, but countless non-aquatic monsters from across the world have been haunting our nightmares since time immemorial. One such animal has been given the Hollywood treatment several times before but has seemingly always been involved in some rather unfortunate circumstances.

After the sheer insanity of 1981’s Roar, making a movie about man-eating lions seemed almost as insane, but apparently, Stephen Hopkins felt differently.

Based on the spine-tingling real-life story about the Tsavo man-eating lions, The Ghost and the Darkness goes above and beyond what one might expect from a mere creature feature. For starters, the movie stars Michael Douglas and Val Kilmer at the top of their acting game, which already gives the film an edge over its peers.

Then, we have the whole background of the Tsavo man-eating lions to take into consideration. The real-life story took place in 1898, during the construction of the Uganda-Mombasa Railway in East Africa. Two unusually aggressive lions were responsible for the deaths of dozens of construction workers – a behaviour that’s not common for these felines, especially the male ones.

The Ghost and the Darkness retells the events of these unusual killings – particularly from the point of view of Colonel John Henry Patterson. A bona fide badass, Patterson managed to hunt down the Tsavo lions and oversaw the construction of the railway project.

Even though the real-life story sounds almost too impressive to be true, The Ghost and the Darkness managed to capture it all in a captivating way. In essence, this was a thrilling journey through uncharted territory, and even though the movie doesn’t seem to care all that much for historical accuracy, the pure action scenes alone make the film worth watching.

Of course, there are a few flaws – the script isn’t exactly Oscar-worthy – even if the sound editing certainly was. Still, some of the more exaggerated moments of the film were negatively reviewed by some critics, most notably Roger Ebert, who saw the film as lacking the subtlety that these sorts of historical thrillers usually have.

While this might sound like a damning critique of The Ghost and the Darkness, what we’re trying to say is that the story it’s based on deserves a second chance, regardless of the original’s lukewarm reception. This time around, the film could do a better job telling Patterson’s story, relying less on bombastic violence and more on character development and the historical drama that surrounded the railway construction.

Rebooting The Ghost and the Darkness for a modern audience would certainly be no easy task. Capturing the historical context of Patterson and co. would go a long way towards making the film more believable, but other than that, it only needs to keep the core elements of this fascinating tale intact for us to really enjoy a second viewing.

What we need is a gritty, more grounded retelling of Patterson’s account – preferably one that’s directed by Neill Blomkamp. After District 9 and Elysium, we know he knows how to create movies filled with eye-popping visuals and dazzling action sequences while keeping them rooted in realistic, real-world settings, which is just what The Ghost and the Darkness so direly needed.

Even Idris Elba’s most recent survival thriller film, Beast, seems to take inspiration from this classic.

Tell us, does 1996’s The Ghost and the Darkness still haunt you?