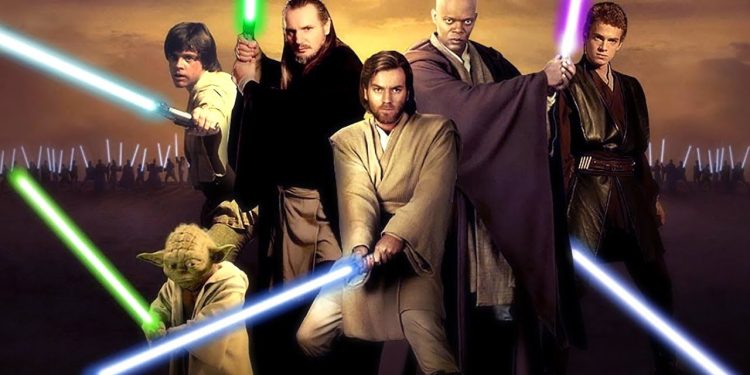 Jedi come in all forms and sizes. Much like every other profession or talent in the Galaxy, not all Jedi are equally talented in the ways of the Force. Some of these Jedi Knights have a higher understanding of the mysteries of the Force, while some others are unnaturally talented in lightsaber combat. In this list, we’ll be taking a look at some of the most prominent Jedi in the Star Wars franchise, as we try to find out which one among them all could truly be called the most powerful Jedi in Star Wars history.

The Most Powerful and Strongest Jedi of All Time

One of the most decorated Jedi Generals during the Clone Wars, Master Ki-Adi-Mundi was a veritable force to be reckoned with. His binary brain allowed him to observe both sides of a conflict simultaneously, turning him into an invaluable strategist for the Republic in the war against the Confederacy of Independent Systems and the Sith.

Mundi’s talent with both the Force and the lightsaber was also the stuff of legends on the battlefield – skills that gained him renown among his fellow Jedi as one of the most powerful Jedi of the Republic. Unfortunately, not even Mundi’s tactical mind prepared him for Order 66, as he perished leading the Clone forces in Mygeeto.

An unconventional Jedi Master that feels more at ease underwater than on land, Kit Fisto could be described as the most powerful Jedi to ever fought a battle on the open seas. This Nautolan Jedi warrior first gained prominence in the first Clone Wars cartoon, before he got a more substantial live-action role in Revenge of the Sith, where he was one of the Jedi that accompanied Mace Windu to capture Palpatine.

Unfortunately for Fisto, not even his skills were enough to stop Darth Sidious, as the Sith Lord easily disposed of the entire group of veteran Jedi fighters.

Even though he might not seem like it at first glance, Mace Windu is one of the most important characters in the Prequel Trilogy. While his knowledge of the Force is considerable, his reputation as the best lightsaber duelist in the council is the reason why he was ever considered one of the most powerful Jedi Masters to ever live.

The only issue with Windu’s way of thinking is that he embodies some of the most negative traits of the Jedi during the last days of the Republic. Windu’s hubris encapsulates the image that most people on the outside believe the Jedi are like, which is ironic since that same pride would have saved the Galaxy from Darth Sidious if he had managed to strike down Palpatine before he was sent flying thousands of feet into the air.

Sadly for die-hard Star Wars fans, Mara Jade is part of a group of characters that are no longer canon in the franchise’s extended universe. For those of us who have read the extraordinary Thrawn Trilogy of novels, Jade remains the most complex and fascinating female character ever introduced in the Star Wars mythos.

Jade began her career as both a smuggler and the Emperor’s Hand. However, as the story moved on, she eventually developed a close relationship with Luke Skywalker, ultimately choosing to walk the path of the Jedi. Not only did Jade and Luke get married, but she also became one of the most powerful Jedi of the new Council founded by Luke.

Speaking of Luke Skywalker – the most prominent member of the Skywalker family has had a complicated history within the films, especially with the newer ones. Before The Last Jedi tainted Luke’s legacy for long-time fans of the series, his extended universe stories made him out to be the embodiment of the Jedi creed.

In the now non-canon novels, Luke rebuilt the Jedi Order from the ashes, reshaping it into a more humble and less prejudiced institution. His control over the secrets of the Force, along with his natural talents of being a Skywalker, turned Luke not only into one of the most powerful Jedi in history – but also into one of the most beloved characters in the entire franchise.

No list of the most powerful Jedi could ever be complete without mentioning the quintessential Jedi Master, Obi-Wan Kenobi. A hero of the Clone Wars and one of the very first Jedi to become a Force ghost, Kenobi is a legend inside and out of the Star Wars universe.

We first saw Obi-Wan as Qui-Gon Jinn’s Padawan in The Phantom Menace, and even then, the young Jedi already demonstrated a high level of skill with the lightsaber. However, Kenobi’s resourcefulness and calm mind were undoubtedly his strongest attributes, as he was often seen as the voice of reason in times of need.

Anakin’s fall from grace and eventual transformation into Darth Vader is one of the most iconic legends in the Star Wars universe. The patriarch of the Skywalker family has a fascinating relationship with the force – a bond that turned him not only into one of the mightiest Jedi but also one of the most fearsome Sith Lords.

Even though he never became a proper Jedi Master, Anakin still was recognized as one of the greatest Jedi to ever set foot in the Council. That only made his turn to the Dark Side all the more demoralizing for the remainder of the Jedi Order. Fortunately, Anakin managed to redeem himself in his last moments, ending the life of Darth Sidious and even becoming a Force ghost to join his long-time friend Obi-Wan.

If there’s one Jedi that hasn’t received the screentime he deserves, that would be Qui-Gon Jinn. The only mistake in his illustrious career was bringing Anakin into the Order, and he didn’t live to see the consequences of his actions.

Still, Qui-Gonn is considered one of the most powerful Jedi due to his control over the mysteries of the Force. He was the one who perfected the Force ghost technique, allowing him to manifest among the living even after his passing.

Marek was the opposite of Vader in that he began as a follower of the Dark Side, but eventually turned the page and became one of the most powerful Gray Jedi. If there’s a character that deserves another chance at being canon, that would certainly be Galen Marek.

Master Yoda might as well be the face of the Jedi for an entire generation of Star Wars fans. Revered as one of the wisest Jedi Masters to ever grace the Council, Yoda was also a skilled warrior that could hold his ground against any Sith Lord.

He’s one of the few Jedi who have managed to pass away peacefully (maybe the only Jedi to do so), after a long life of teaching some of the most illustrious Jedi who ever lived. Without a doubt, Yoda is the only character who easily fits the definition of “most powerful Jedi” in the whole Star Wars mythos.

Tell us, do you agree with our list? Are these the most powerful Jedi of all time?