The 10 Most Disgusting Movie Scenes of All Time 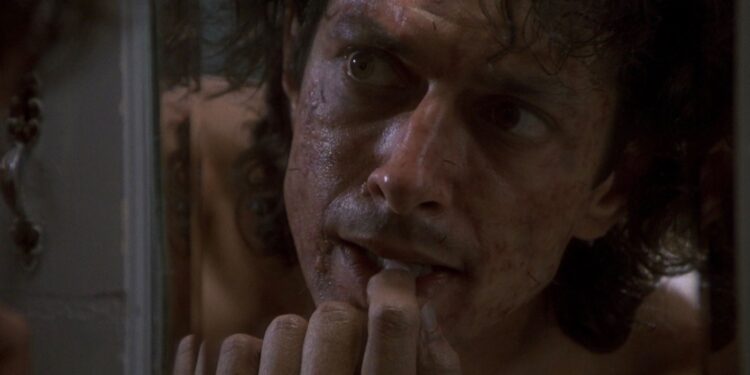 Crude, violent, or simply worse, not every movie has to be as dazzling as they were in the golden days of Hollywood. Some films went a bit over the top to produce some unforgettably awful moments that might make even the strongest stomach turn queasy all of a sudden. We’ve already taken a look at the most disgusting movies but, in this list, we’ll be taking a look at the nauseating side of cinema with the 10 most disgusting movie scenes of all time.

It certainly says something about the contents of our list when we have to open with one of the bloodiest scenes ever filmed. 1992’s Braindead (also known as Dead Alive in some territories) is mostly a super gory dark comedy, but the climax scene is an outrageous bloodbath that might make you cringe more than once.

At some point during the carnage, a lawnmower gets involved, tearing people down to gory pieces in a very graphic way. There are some other scenes in this film that could also be disturbing if you have a weak stomach, so try not to watch Braindead while you eat.

Written and directed by Peter Jackson – yes, the same Peter Jackson that directed the Lord of the Rings trilogy –, Meet the Feebles is a twisted parody of the Muppets, featuring lots of violence, crudeness, and the occasional scatological joke here and there.

A particularly disgusting scene features a fly reporter investigating the mysterious disease of Harry, the rabbit star of the Feeble Variety Hour. The way he does it, however, involves a dirty toilet bowl and a meal of unspeakable substances. Just what was going through Jackson’s head in the 80s and 90s is anyone’s guess.

They might be puppets but that’s definitely one of the most disgusting movie scenes of all time. Gross!

For all intents and purposes, there are virtually no flat-out disgusting scenes in the 2008 feel-good drama Slumdog Millionaire. However, one scene early in the movie serves as a way to present the fraternal dynamic between brothers Jamal and Salim in shockingly crude detail.

When he was just five years old, Jamal was a great fan of Bollywood star Amitabh Bachchan. In fact, it could be said he was willing to do anything to get an autograph of his idol – a fact he proved when he jumped straight into a cesspool to recover said signature. The scene is played mostly for laughs, but that doesn’t stop the director from showing young Jamal covered in filth from head to toes.

2004’s Shaun of the Dead is the first entry into Edgar Wright’s “Three Flavours Cornetto” trilogy. A homage to multiple zombie films and the stereotypes associated with them, Shaun of the Dead is pure comedy with just the right amount of heart put into it to turn it into an instant classic.

When our heroes secure themselves in the local pub during the movie’s climax, one of them decides he’s had enough with the whole zombie apocalypse thing. Poor David is devoured by the flesh-eaters in gory detail: a moment that’s clearly a homage to Romero’s Day of the Dead, but it sticks out like a sore thumb in such a lighthearted film.

Similar to Shaun of the Dead, the most disgusting scene moment in Monty Python’s The Meaning of Life contrasts with the rest of the movie due to its graphic nature and overall nasty delivery.

Unlike some of their other more successful feature-length films, The Meaning of Life feels more like a collection of sketches from the Pythons, and Mr. Creosote is the perfect example of their cartoony antics taken to disgustingly realistic extremes.

The scene in question features a morbidly obese man that explodes after eating a sizeable banquet. The explosion itself, as well as the moments before the man blowing up, are all pretty hard to stomach – no pun intended.

Seriously: what was going on with Peter Jackson before he made The Lord of the Rings? 1987’s Bad Taste is a crude satire written and directed by Jackson that honours its title at every chance it has. The movie is about an alien invasion in the fictional New Zealand village of Kaihoro. These aliens turn out to be quite the business moguls, and they’re abducting people to sell as food in their intergalactic fast-food franchise.

Although the film’s premise is revolting enough, one scene has one of the human protagonists eating from a bowl of alien vomit, and even enjoying the taste. This is the type of unhinged weirdness that every cult movie should strive for.

When you take into consideration that we’ve already seen alien vomit and a kid jumping into raw sewage, you know that a movie as innocuous as 1991’s Problem Child 2 must be hiding something to make it so high into this list – and it does!

In the film’s crowning moment of grossness, Junior – the titular “problem child” – sabotages a carnival ride and sets it to max speed. The ensuing chaos concludes in litres of fake puke being sprayed everywhere, including some very graphic close-ups of the actors getting hit square in the face with the nasty paste.

Directed by David Cronenberg, who many might consider the master of body horror, the 1986 adaptation of The Fly takes the original’s premise and amps it up to the standards of the hyperviolent 80s.

The film’s monster (played by Jeff Goldblum) is a scientist who goes through a twisted and painfully slow transformation when his DNA gets mixed with that of a fly. Every scene that the creature is in is a display of incredible, stomach-turning makeup and prosthetics. Expect tons of blood and diverse bodily fluids. The Fly definitely has some of the most disgusting movies scenes of all time.

These last two entries in our list hold the distinction of being a notch above the rest not only because they are disgustingly shocking, but also because they are unexpectedly real. First, we have the forbidden classic that is Cannibal Holocaust: a movie that had to be investigated by Italian authorities for its graphic content and realistic violent scenes.

Thanks to this movie, films now have to include a disclaimer assuring audiences that “no animals were harmed” during its production. The reason for this is that real animals were killed and butchered for Cannibal Holocaust. One particularly graphic scene features a group of people killing and dismembering a real turtle in gruesome detail. Truly evil stuff.

A list that’s said to include the most disgusting movie scenes of all time can’t just ignore John Waters’ crass masterwork Pink Flamingos. Almost every scene in this movie could qualify as the most disgusting we’ve ever seen, but if you’re familiar with this movie, then you know exactly which moment we chose as the worst of them all.

In one of Jonh Waters’s most John Waters moments, the director decided that the star of the movie, Divine, should eat a piece of dog faeces. To make it as realistic as possible, those droppings had to be authentic. The details of how they got the scene to work in the end, including getting the right “look” for the wastes, are too disgusting to include here. Suffice to say that, yes, Divine did eat the dog poop. And that’s the perfect sentence to end this list.

What do you think are the most disgusting movie scenes of all time?