Home > Movies > Is Howard The Duck The Most Awkward And Cringeworthy Marvel Movie?

Is Howard The Duck The Most Awkward And Cringeworthy Marvel Movie? 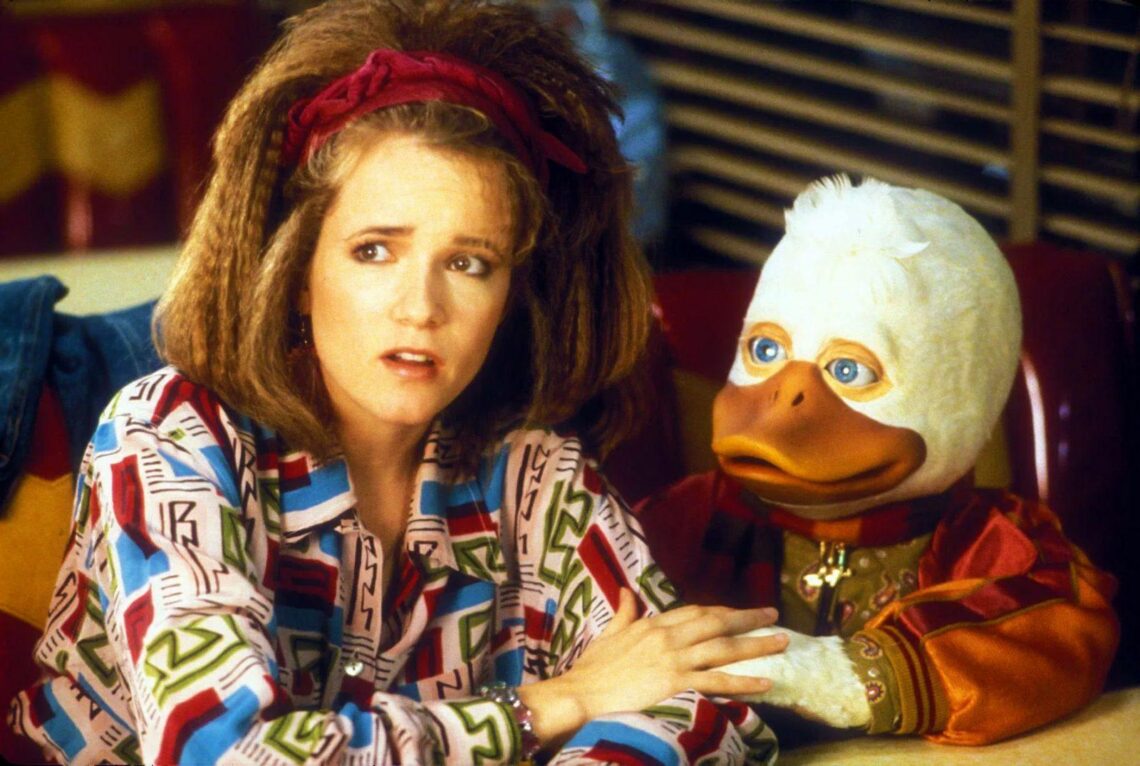 Howard the Duck is one of the cornerstone characters of the Marvel Universe, although an often overlooked one.

This fowl figure shot to overnight fame by being a sarcastic, wise-ass mouthpiece who offered a darkly comedic narrative on comic books, the creators behind them and society in general. Yet when the chips were down, he’s also proven himself a hero by being involved in some major crossover events over the years. It isn’t surprising that a movie adaptation would come out starring him.

It was a major commercial and critical success. Unfortunately, he only had a cameo in it and the film was Guardians of the Galaxy.

The snub of it is that his own movie, which came out in 1986, was a disaster on all levels. Howard the Duck became synonymous with bad comic book movie, years before stinkers like Elektra and Green Lantern overshadowed it. Since then it’s become one of Marvel’s skeletons in the closet and almost entirely ignored. Now it’s time to take another look and see just how bad it was…

00:01:40 Welcome to Howard’s apartment, where the décor is as dismal as the music. Cue some clumsy parody posters that are meant to be hilarious. They aren’t.

00:03:20 Oh, George Lucas, where did you go wrong? It’s no wonder Howard wanted to sue you in the She-Hulk comic books. As for Steve Gerber’s creator credit, it’s great to see but sad that it’s on such a dud.

00:05:07 Yes, Howard’s getting sent through one of those crazy vortexes to another world (next stop, Earth 616). But the more amazing thing is that they just showed a female duck, naked and in the bath. Uh…

00:07:50 It’s a less-than-bad-ass beginning for Howard on our Earth as he get used as a door prize in a rock club, beaten up by a homeless lady and chased by the biker gang called Satan’s Sluts. Oh, and he’s wearing trousers.

00:09:51 It’s time for Howard to use a bit of quack-fu on some muggers who are attacking pop-rock singer Beverly.

00:10:12 Not since 3 Ninjas: High Noon At Mega Mountain has there been a fight scene quite like this!

00:11:39 After Howard believing that this planet is called Cleveland, he’s corrected by Beverly that this world is called “Earth… I think.” Yup, she’s a bright one.

00:13:19 “I suggest you find a new manager,” Howard quips to Beverly. I’m sure most of the actors in this movie felt the same way.

00:15:46 Howard’s implying that he came from Duckworld. Steve Gerber would possibly disagree with that.

00:18:39 Not only does Beverly violate Howard’s privacy by going through his wallet, she also finds a condom in there. Oddly, it’s out of the packet. Eww. 00:29:10 This one definitely isn’t for kids. He’s got a job working at a, um, massage parlour. That’s a generous description of it. There’s more flesh on display here than in the Marvel Swimsuit issue.

00:41:12 Howard working the Casio keyboard and dancing is foreplay. He’s in bed with Beverly and his feathers are standing on end. You know what that means.

00:45:50 If Ferris Bueller’s principal told you he created the vortex that brought you from your home planet to his – and could now send you back – would you trust him? If the other option is Tim Robbins booking you on a talk show, then yes.

00:48:25 There’s an explosion in the science lab and Howard knows it doesn’t bode well for his return flight. It could be worse. The explosion could be the Fantastic Four reboot bombing.

00:53:55 It’s a manhunt for a duck. A duck-hunt! But what’s up with the head scientist and why does he seem to have a headache he just can’t shake?

00:55:55 It’s a single vehicle car chase and our heroes can’t drive properly, even when they aren’t being pursued. That’s bad.

00:57:53 So the head scientist is possessed by some demonic alien life form which makes him sound like Gozer from Ghostbusters? He needs a keymaster, stat!

01:00:00 A waitress brings Howard his breakfast, interrupting the possessed scientist’s evil rant. He adds, “This will mean the extinction of all existing life-forms!” The waitress quips, “Geez, you haven’t even tasted it yet!” Funny!

01:00:29 It seems the demonic force of evil has the phenomenal cosmic power of rattling around a bottle of tomato sauce and a jar of mustard.

01:05:30 Wait, he also fires energy blasts from his hands which sound just like TIE-fighter blasts! What will he do next?

01:14:51 We’ll ignore Howard and Tim Robbins flying in a microlight in favour of the boss of the local nuclear power plant, explaining to his workers about how safe their working environment is. Despite the villain crashing a giant truck through a totally unguarded main gate just minutes before. It’s an attitude like that which led to Chernobyl, guys.

01:16:34 And it’s back to Howard flying his microlight. There’s not much of an improvement.

01:19:42 The evil alien force knows how to clear the traffic. Just destroy every car in front of you!

01:21:54 “He’s a duck terrorist! He hijacked a plane!” yells Tim Robbins. Wasn’t that the first line in the Patriot Act?

01:23:52 Beverly’s trapped and about to be possessed by an evil alien. What Howard needs right now is a weapon…

01:27:37 …and he’s got one! Not only that but Tim Robbins is using a satellite dish to deflect the evil alien’s death ray. That’s going to play havoc with his sports channel reception.

01:35:30 In a yawn-packed finale, it appears that the evil plan involves covering Beverly and Tim Robbins in glitter. It’s a plan so bad that even Loki didn’t try it.

01:43:59 After an all-singing, all dancing routine (to a song imaginatively titled “Howard the Duck”) as a happy ending, nothing could equal the joy of this film being over. Or could it?

This is a film that you really want to like but just can’t.

That isn’t to say that it doesn’t have some moments. Some of Howard’s comments are amusing, Lea Thompson is gorgeous as Beverly and acts suitably not-too-bright, some of the effects are passable and you can tell that some work went into making the Howard suit. Sadly, the story is weak and Howard… well, he just isn’t Howard. The voice isn’t as snappy and sarcastic as you’d want and the suit, his movements aren’t fluid and, for all its achievements, it makes him look like a chunky kid as opposed to a lean, mean tail-feather-kicking machine.

When your main character doesn’t look or act like the one you know from the comic books, it isn’t going to work. It’s like having Justin Bieber as Tony Stark and making his Iron Man costume out of cardboard. It robs all believability from it.

Toss in a plot that you don’t care about and secondary characters with no personality and it’s a recipe for trouble. Then there’s the tone. Half the time it seems like it was made for little kids, then they throw in some sex gags and some soft-core nudity and it just seems creepy.

It isn’t for children, it isn’t for adults, and it doesn’t seem to be for the fans. So who is Howard The Duck for? Sadly, the answer is almost nobody.