Home > TV Series > Friends: The Reunion Is Made For Die-Hard Fans

Friends: The Reunion Is Made For Die-Hard Fans

Friends is about that time in your life when your friends are your family. 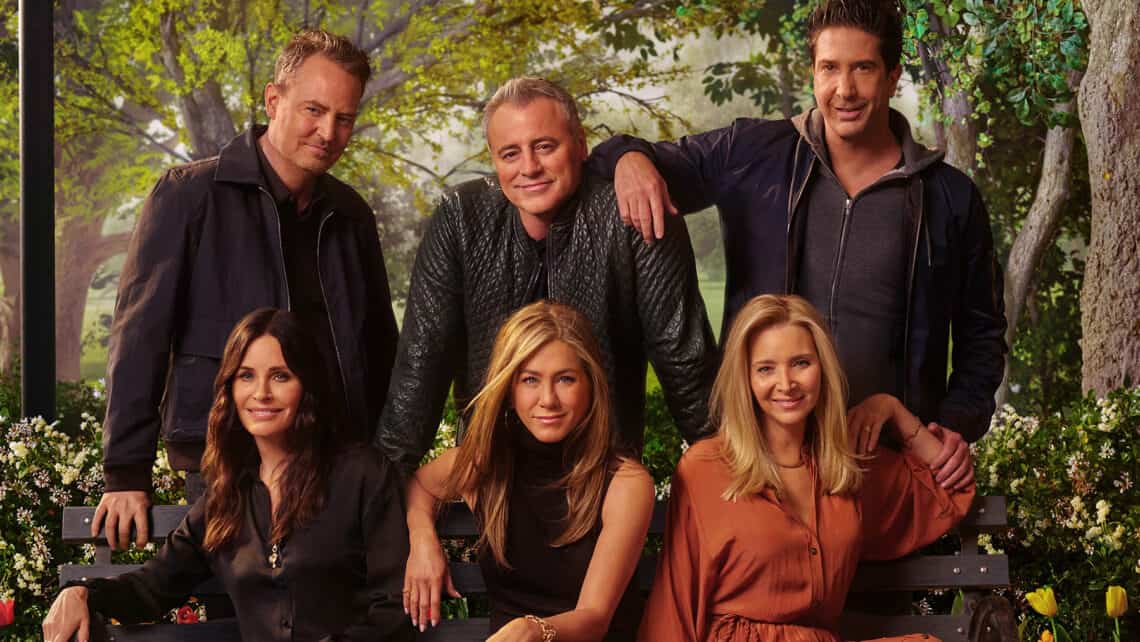 After being delayed for over a year due to the ongoing coronavirus pandemic, HBO Max has finally reunited Jennifer Aniston, Courteney Cox, Lisa Kudrow, Matt LeBlanc, Matthew Perry and David Schwimmer for the highly anticipated Friends: The Reunion special. Directed by Late Late Show producer Ben Winston, the unscripted gathering is the first time in 17 years that the Friends stars have been brought together since the show ended its ten-season run in 2004. Friends: The Reunion begins with each cast member walking onto the recreated Friends soundstage on the Warner Bros lot. It’s filled with some emotional greetings and a good dose of reminiscing. The opening credits are (obviously) set to the show’s theme song and leads into a live interview hosted by late night television host James Corden.

Seeing the entire cast reunite to talk about their time on the series is very rare because journalists aren’t even allowed to ask the stars any Friends related questions during other press events. Designed to be a celebration of the beloved comedy series, the interview is intertwined with everything from table reads to trivia games, and some very cool archive clips.

During Friends: The Reunion, a few celebrity guests stop by (in person or via video) to share fan-favourite moments from the show and to discuss the impact Friends had on their lives. There’s also a very special guest who joins Lisa Kudrow for a duet of Smelly Cat.

Created by David Crane and Marta Kauffman, the hugely popular sitcom made its NBC debut on September 22, 1994, and followed the lives of a group of twenty-something New Yorkers. The premise for the series was based on Crane and Kauffman’s own experiences living in New York in their 20’s surrounded by their tight circle of friends.

Wanting to create a show “about that time in your life when your friends are your family”, the duo went in search of an ensemble cast whose stories are told equally. The story behind finding the perfect actor/actress for each character is the most interesting part of Friends: The Reunion.

Ross Geller was written specifically with David Schwimmer in mind. But the show’s creators had to persuade him to accept the part because, after a few bad experiences, the actor had quit television in favour of theatre.

Lisa Kudrow was chosen to play Phoebe Buffay after other actresses failed to impress. Thanks to her performance on Mad About You and an incredible audition, Kudrow got the part.

Matt LeBlanc had very little acting experience when he landed the role of a lifetime as Joey Tribbiani. But it wasn’t easy as the audition process “went down to the wire” with LeBlanc and another actor. Interestingly, the other actor ended up playing “fake Joey” in a later episode of Friends called The One With Unagi.

Courteney Cox was originally considered to play Rachel Green. But the actress didn’t “feel like she was a Rachel” and read for the part of Monica Geller instead. The showrunners loved her joyful, rich interpretation of the character and the role was hers.

Casting Chandler Bing was a little difficult but thankfully Matthew Perry brought him to life with a special comedic sparkle. Although he was working on another project at the time, he was moved over to Friends because it was deemed the stronger show.

Spoiled, self-involved Rachel Green was last part to be cast. And the creators knew it would be hard to find an actress who could make viewers love her in spite of her flaws. After seeing countless actresses, Jennifer Aniston ultimately won everyone over and the rest is history. Affectionately nicknamed “The One Where They Get Back Together”, Friends: The Reunion has everything die-hard fans of the series could have hoped for. However, if you don’t regularly immerse yourself in Friends reruns the almost two-hour special might feel a little unnecessary.

Friends: The Reunion is currently available on HBO Max. The special will air exclusively on DStv in South Africa on Sunday, May 30th at 20:00 and will be available to stream via Showmax from Monday, May 31st.