We Interview The Creative Team Behind The Sourvenir: Jason Geland and Daniel Hugo 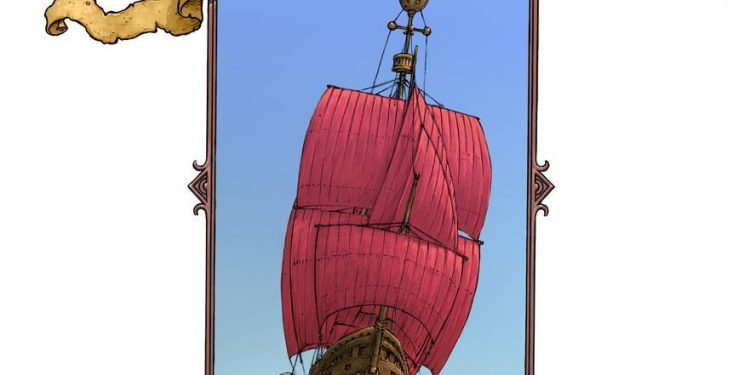 The Souvenir is a comic book that will be releasing this FCBD at Readers Den in Cape Town. The creative tag team of Jason Geland and Daniel Hugo are the talents behind the develoment of this graphic novella. We caught up with them to find out a little bit more about this pending release.

1) How did the two of you end up working together in order to create “The Souvenir”?

Daniel: Jayson and I had collaborated on a previous project, “A Genesis”. Upon completion of that story, Jayson expressed interest in doing another collaboration and so I mentioned an idea of a possible story that had been brewing in the back of my mind.

Jayson: I’ve long been a fan of Daniel’s artwork, and after ﬁnally having had the chance to collaborate with him on a science ﬁction story prior to this one, I was really interested to see what we could conjure up next. 2) How did the two of you come to the conclusion that a re-imagining of local stories is the way to go for this project?

Daniel: It wasn’t so much a conclusion we came to. Rather it was an organic development through discussions, research, sketching & writing.

Jayson: I don’t think either of us were consciously aware of doing something based explicitly on local myth when we ﬁrst started talking about a new tale for us to tell. During one of the earliest discussions we had about the comic, I remember Dan alluding to a concept he’d been contemplating for some time, one which I really liked, and from there on out we went about expanding it into a story.

3). Can you tell us what the Souvenir is about?

Daniel: Without spoiling the story too much, “The Souvenir” is a re-imagining of a classic tale from the Cape, incorporating other folklore, myths & legends of the region to create another world altogether that only echoes our own.

Jayson: In short, The Souvenir is a marriage of various fables and disparate strands of lore, most of them Cape based. The story itself draws on these early yarns, blending them to present a fresh perspective on near-forgotten legends; a new vista of ﬁction inﬂuenced by, but not reliant on or restrained by, its assorted sources.

4) Another important aspect of Cape tradition was the telling of tales through the use of pictures. Will the art in this comic follow suit in creating picturesque environments that will get the imagination going?

Daniel: The emphasis of the story doesn’t focus on any actual historic peoples. One aspect I enjoy tremendously in the development of a story is the creation of worlds. So, yes, great care was taken on the environment in which the story plays drawing inspiration from different sources.

Jayson: Dan has done a superb job of creating an incredibly immersive and vivid world for The Souvenir, I cannot say that enough. The backdrop he’s drawn practically drips with atmosphere and charisma on every last page, lending the narrative a rich dimension of historical familiarity while also, intriguingly, one of utter detachment from its origins. I’m lucky just to have been around to witness the fruition of the immense realm he ﬁrst envisioned all those months ago.

5) The Souvenir is based on Cape Folklore and Fables, how did you go about finding the references used in the comic.

Daniel: Research on the net & specifically my local libraries.

Jayson: Once the idea was initially settled upon, we began exchanging whatever cautionary fables, myths and fantasy pertaining to Cape Town we had prior knowledge of. After that I asked around some more, spent long hours at the library and googled like a man possessed! We came across loads of fascinating material, leaving us with a wealth of information with which to adapt and condense into a story of our own.

6) In all of the preview illustrations a certain individual always seems to be in the frame; who is the trench coat wearing captain?

Daniel: One will need to read it to find out…

Jayson: His identity is revealed within the pages of the book, to tell you here would only ruin the surprise!

7) What would you say has been the most challenging aspect about putting this issue together?

Daniel: To date this is the longest story I’ve worked on that includes the page planning, pencils, final linework & digital colouring (except a freelance project where I had to pencil a 66 page graphic novel, that to date has not been published). The whole process from planning to completion took about 6 months, in between doing other freelance work.

Jayson: The only real challenge, if you’d even call it that, for me was to adjust to the style of writing we’d decided on for the story. Remaining consistent over all 18 pages, especially while leaping almost blindfolded between projects, seemed a touch daunting at ﬁrst. However, this concern was swiftly allayed when I eventually started scripting; the approach became fun, words ﬂowed and the story unfurled. Apart from that, I had no qualms to mention.

8) With a total of 18 pages, is this graphic novella set to be a one shot, or is it simply testing the waters in the hopes of setting sail with further issues?

Daniel: Not quite sure on this one yet… Wouldn’t mind exploring this world some more.

Jayson: Who knows? I don’t like returning to stories I’ve previously written to be honest, as I feel I have by then already said everything I wanted to say on the topic at hand, but this one would deﬁnitely be interesting to visit again should the time come.

9) What is the one Cape Town myth that you think is realistic enough to believe in?

Jayson: Every single myth I’ve encountered regarding Cape Town is implausible, sometimes laughably so. That does not mean they are completely frivolous or without justiﬁcation. The beauty of all fables is that they are still able to elicit genuine responses centuries after their inception; be it delight or fear, awe or indifference. Myth is capable of this without having to be credible in the slightest.

10) Who is your favourite sailor, pirates included?

Jayson: Oooh! They’d have to be Jean Melot aka Captain Snake from the Italian comic Zagor, and Charlotte de Barry from Edward Lloyd’s 1836 penny dreadful, History of the Pirates.

11) This graphic novella has been placed in the genre of horror and mystery. What is your favourite tale from this same genre?

Daniel: Quite a number of them with classics & comics… Pushed for an answer I’d have to say “The Call of Cthulu”, there is just something to it.

Jayson: I’ve always maintained a morbid sort of fascination with this genre. Having been exposed to the short stories of Poe and Lovecraft early on, I’ve since grown to love the work of writers such as Ambrose Bierce, whose ‘An inhabitant in Carcosa’ is still a favorite of mine. Other practitioners of the genre whose work I enjoy include Jack Ketchum, Angela Carter, Algernon Blackwood, Ramsey Campbell, Clive Barker and Thomas Ligotti. It’d be impossible to pick an all-time favorite, but the story I’m currently enjoying most upon a second reading is Henry James’ engrossing classic ghost story, ‘The Turn of the Screw.’