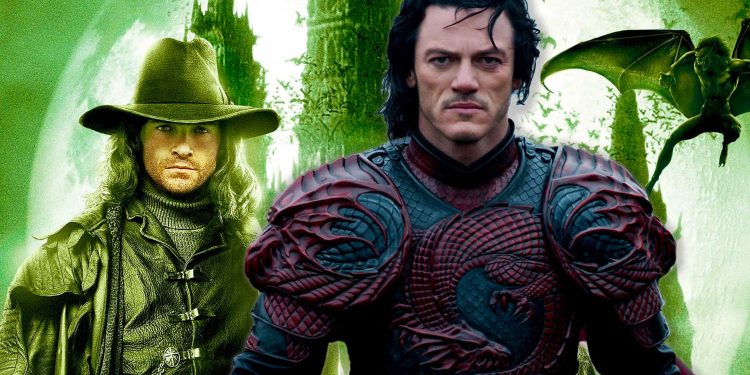 Once upon a time… Universal and Legendary Pictures toyed with the idea of teaming up Dracula with Van Helsing in a Dracula Untold sequel. Unfortunately, it was cancelled. But why?

Throughout the history of cinema, there have been periods when a certain sub-genre of films completely dominates the box office. We’re experiencing it at the moment with the constant barrage of superhero movies, but let’s not forget how massively popular the action flicks were in the 80s, or even better, how much of a cultural revolution monster movies were during the 50s.

Cinematic landmarks like the works of Bela Lugosi and Boris Karloff have become icons of the film medium – which might be why, from time to time, there’s been a push to resurrect the classic style of creature features that haunted the nightmares of our grandparents.

That was the core idea behind Universal’s now-defunct “Dark Universe:” an answer to the extremely popular Marvel Cinematic Universe, with classic monsters instead of superheroes. On paper, it sounded like a great idea – but fans thought otherwise, and even the first film in the series failed to live up to Universal’s ambitions.

The Beginning of the Dark Universe

Dracula Untold presented audiences with a much more relatable version of the classic blood-drinking Count. In an effort to redeem him, this Dracula had a tragic story that turned him into one of the Dark Universe’s many planned horror antiheroes. Despite the early failure of the Dark Universe, Universal already had plans for a Dracula Untold sequel – one that would take the immortal character to the modern era and form an uneasy alliance with one of his most famously sworn enemies: Abraham Van Helsing.

Granted, this would not have been the same version of Van Helsing immortalized by Hugh Jackman, but rather a new take on the character that would have been much more similar to the one written by Bram Stoker. Still, a Van Helsing solo movie was something that had been in the works for the longest time, even when Anthony Hopkins was the one that was supposed to star in a 1992’s Dracula spin-off.

In the now-cancelled Van Helsing solo flick, we would have seen a modern-day vampire hunter joining forces with the same vampire from Dracula Untold. Their unlikely alliance comes after the duo sets their aims on hunting a Dark Universe version of the real-life serial killer, Elizabeth Báthory.

This crossover film would also have re-introduced some elements of the Dark Universe that we’d seen in 2017’s The Mummy. Van Helsing was supposed to be a member of Prodigium – a secret society of monster hunters that would act as this cinematic universe’s counterpart of the Avengers.

The idea behind this Van Helsing spin-off – which also would have worked as a Dracula Untold 2 of sorts – doesn’t sound all that bad. Perhaps if the project wasn’t ever associated with Universal’s Dark Universe in the first place, the movie would have had a chance to see the light of day.

As it stands now, the cancellation of Universal’s ambitious cinematic universe also means that almost every film tied to it has been permanently canned. The only movie that was supposed to belong to the cinematic universe and has been retooled to be a stand-alone film is a new version of Frankenstein’s Bride starring Scarlett Johansson.

Fans of the Dark Universe – or at least of the idea behind the franchise – might need to find their dose of vampires, werewolves, and other creatures of the night somewhere else. Fortunately, there’s never been a period of scarcity when it comes to the world of horror movies – especially since there are so many amazing independent productions out there.

Tell us, would you have liked a Dracula Untold sequel featuring Van Helsing?