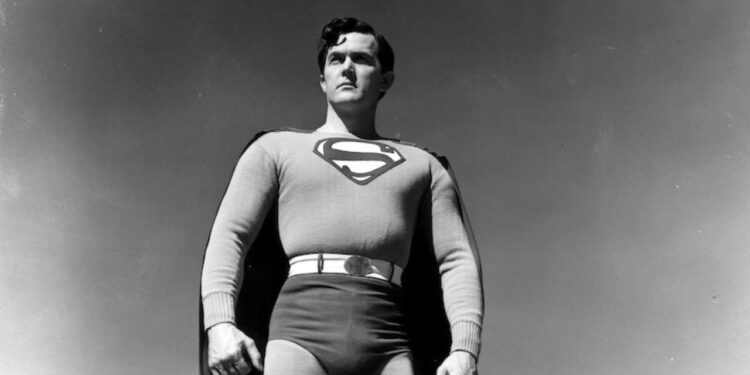 In Atom Man Vs Superman, Lex Luthor’s latest scheme has been foiled by Superman, and he’s been taken to jail. But when a crime wave hits Metropolis, spearheaded by teleporting mobsters, it seems like there’s a new evil mastermind in town: the mysterious Atom-Man!

With the police overwhelmed and the Daily Planet’s finest reporters in constant jeopardy, even Superman has his hands full. When Luthor cuts a deal with the government that sees him released from prison, it’s revealed that there’s a connection between the two villains. Can Superman save the day once more?

Of course, he can. In a serial like Atom Man Vs Superman, the outcome is never in doubt.

Unfortunately, this one came at the tail-end of the genre, so there’s little creativity on display and the cliffhangers fail to generate much excitement. The story in Atom Man Vs Superman, initially promising, falls apart so quickly that you’ll wonder if they made it up as they went along after a certain point. Luthor’s perfect scheme to teleport Superman into “the empty doom” devolves into wasting time mucking about with synthetic kryptonite, heat rays, fake news, becoming a legitimate businessman and creating flying saucers.

Which is kind of silly, when his grand plan is nothing more than wanting his henchmen to rob jewellery stores.

As for the not-so-special effects in Atom Man Vs Superman, the most common is the sight of Superman (Kirk Alyn) leaping up into the air, only to be replaced with an animated version of the Man of Steel for the flying shots. Sure, there’s the occasional close-up of Kirk as he holds his arms out unconvincingly, but that animated version does all the flying. The transitions are smooth, but it’s so obviously a cartoon being used that it instantly ruins the excitement every time.

Fans of the Batman serials will instantly recognise the musical score, cave sets, interior locations and even the machinery on display. There are also some shockingly bad moments like Superman inflating a life raft to save a family from drowning (he couldn’t just fly out to get them?) and Perry White being so inept he repeatedly can’t switch on a radio which is right next to him, instead of asking Jimmy Olsen for help. As for the disco-ball bobblehead of the Atom-Man, the less said the better.

So is there anything in Atom Man Vs Superman that redeems this?

Sure. After all, it’s Superman, and that makes it kind of cool regardless. It’s a classic, and even if the story is bad it’s still entertaining. Atom Man vs. Superman may not be as good as the Batman serials, and certainly isn’t as brilliant as Captain Marvel one, but it’s a piece of pop culture history nonetheless. Also, it’s the first on-screen live-action appearance of Lex Luthor. And what a Luthor he is!

Picture this: Luthor, disgusted that a pair of his henchmen have failed him, asks for one of them to volunteer to be executed as punishment. Obviously, neither man wants to die, but one grudgingly steps forward to be killed. Instead, Luthor kills the other, claiming that he needs men of courage on his side and that only one of the pair displayed that quality. That sort of cold, calculating logic is what fans want from Luthor and here it’s on display.

Atom Man Vs Superman may not be the best serial out there, but at times it gets things right. And for the record, the missing ingredient in synthetic kryptonite isn’t tar. Only a moron would think it is.