The living dead haven't been this fun in a while. Netflix’s Army of the Dead won’t ever need a Snyder Cut. This is a Zack Snyder film through and through. From the eye-popping large scale cinematic sequences to the masculine heroic god-like figures and the colourful but poetic comic book-inspired story, fans will recognise the talented filmmaker’s signature brand. 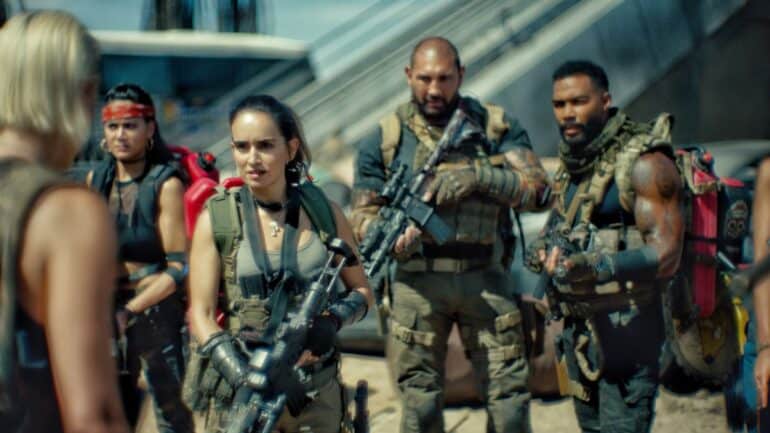 Those who have been feeling zombie fatigue should be pleased. Snyder, who cut his teeth on horror with 2004’s Dawn of the Dead, returns to the genre but brings with him the stylised techniques and ideas he learnt from working on Warner Bros’ DC properties. Army of the Dead isn’t your standard zombie flick. In fact, it could possibly be described as a zombie comic book film – complete with world-building and a cinematic universe.

There’s a hero: Dave Bautista’s Scott Ward, a former war hero who makes a living flipping burgers on the outskirts of a zombie-infected Las Vegas. When he is approached by Bly Tanaka (Hiroyuki Sanada) to retrieve $200 million sitting in a vault underneath a casino, he pulls together the perfect team of outcasts to perform the deadly heist.

There’s a villain: Zeus is a zombie-like creature who rules over the area with his horde – who all possess super-strength and super-speed. These are not your average reanimated corpses or virally infected human beings. They are intelligent too.

And there’s a dilemma: Ward only has a few hours to complete the mission. Over and above that, his daughter, Kate (Ella Purnell), insists on coming along to rescue a struggling mom who ventured into Las Vegas in hopes of finding some riches. 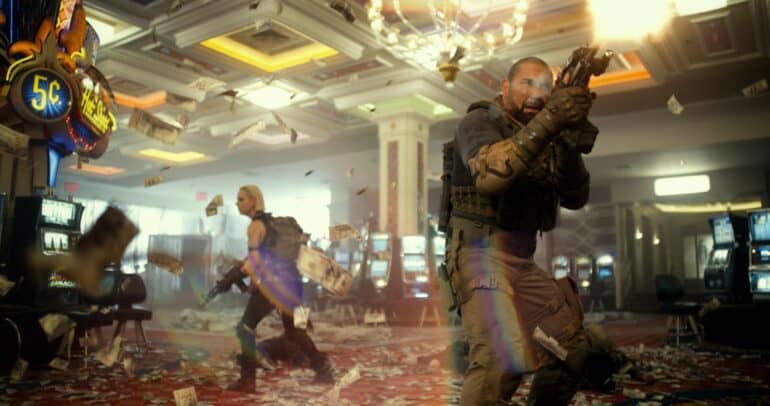 Sure, there’s carnage and the usual flesh-chomping hordes of zombie strippers and Elvis impersonators in Army of the Dead, but Snyder elevates the material to be more about thunderous action set pieces than being truly afraid of the creatures lurking in the dark. If you’ve ever played any of the recent zombie video games, like Days Gone, you’ll sense familiarity here.

Army of the Dead is violent. Gory. Bloody. Funny. Tense. And, most importantly, it’s fun with a capital F.

This is Zack Snyder’s Suicide Squad.

Dave Bautista is fantastic as the lead and proves to have enough star power to carry a Hollywood feature film on his own. He delivers on the action but also excels in the quieter moments and the laughs.

You can tell that everyone involved had loads of fun working on Army of the Dead and that joy spills over into the film and spreads to the audience too.

The only real issue here is that some might find the film incredibly linear. There are no real twists. There are no life lessons. And the conclusion might be a little up in the air.

Still, it’s incredibly entertaining! And that’s exactly what Netflix‘s Army of the Dead is all about.

Army of The Dead

Zack Snyder breathes new life into the zombie genre by adding comic book elements that make Army of The Dead both fun and entertaining. This is great Friday night entertainment.