It’s bizarre to think that 35 years have passed since David Cronenberg unleashed one of his most iconic films on the general public, and we still haven’t quite gotten used to Videodrome. If you’ve ever wanted to see James Woods getting sexy with a TV set (albeit one with Deborah Harry’s face on the screen), Woods having a video machine surgically grafted in to his chest, or even Woods being so deranged that he makes “normal” James Woods seem bland by comparison, this is the film for you. 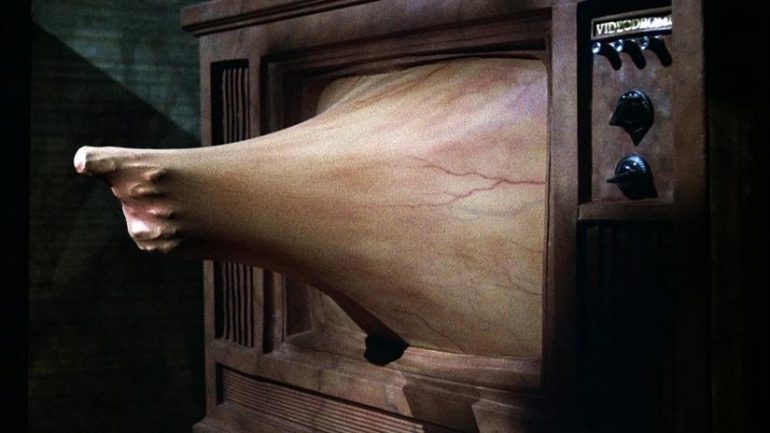 Max Renn is a budget TV station president who’s looking for the cheapest products he can find to air. Actually, he doesn’t just want cheap shows – he wants them nasty, too. The nastier the better, because he knows that controversy equals cash. He thinks he’s hit the jackpot when his tech guy stumbles across a show called Videodrome and shows it to him. Videodrome has no plot at all and, basically, it’s just a snuff show featuring tortures and murder. Max figures that it’s fake, but he still can’t stop watching it.

He hooks up with radio DJ Nikki Brand, a woman who likes it kinky, and they watch some Videodrome together. She goes off on her own mission to locate the source of the show and audition for it, while Max goes more than a little mad and learns that not only is the show real but that it’s some sort of bonkers political tool to turn TV into real life. Don’t ask. Before you know it, Nikki’s appearing on Videodrome and Max gets a video machine stuck inside his chest through which he can be programmed.

Of course, Videodrome also creates brain tumours in those who watch it, so it’s questionable as to what’s real. Max finds out he’s been the pawn of some weapons-making optometrists who are trying to get the world to watch the show and gets programmed to kill his co-workers… but then gets reprogrammed to assassinate the creators of the show itself. What does it mean? Will he ever get that pesky VCR out of his chest? Why is all of this happening in Canada? Who knows? 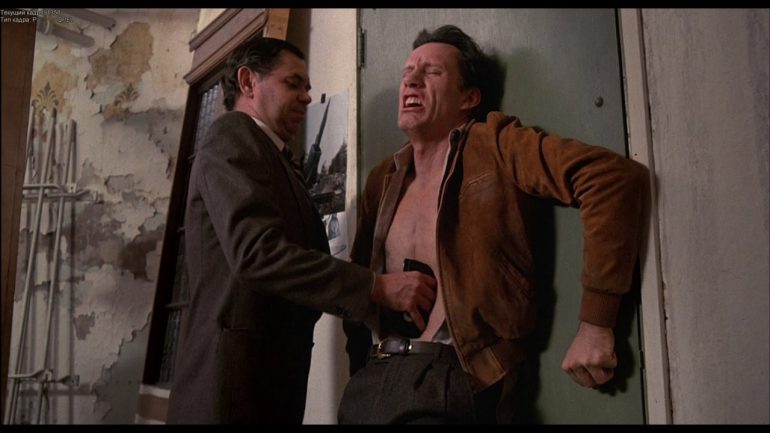 Videodrome is a creative film, there are no doubts about that. It’s trying to get the message across that TV controls our lives a bit too much, and we shouldn’t just change the channel but switch off entirely sometimes. James Woods acts completely off the rails here and gives possibly the wildest performance of his career. Deborah Harry, while only in a handful of scenes, exudes coolness. Of course, they bulge out of a TV screen of her lips at one point, but who’s going to argue?

If you saw eXistenZ you know the score, because that particular Cronenberg film was pretty much a rehashing of the ideas in this Cronenberg film. That’s not a bad thing because eXistenZ rocked and had a lot to say about computer games and the influence they have on us. There are the same subversive ideas here, no real heroes to get behind, and some of the ideas are so crazy that you’ll think Cronenberg has been taking Terry Gilliam pills with a David Lynch chaser.

Unfortunately, Videodrome hasn’t aged well. The plot rapidly falls apart and the whole production becomes a bit of a mess, even if the creativity is dialled up to 11. It’s a stunningly original and artistic film, but it’s not exactly a great one. It’s interesting to watch, even all these years later, although it drags in places and the whole film never quite lives up to the potential it has. If you like Cronenberg and you like weird, then you can’t really go wrong with it… but be warned: it’s not the riveting cult classic you may be hoping for.