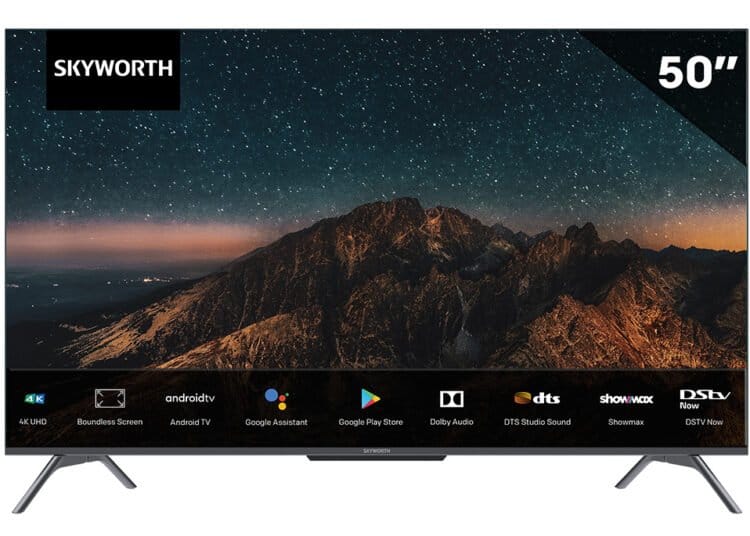 For most users, it’s easier to buy a new smartphone than it is a new TV. While there are arguably more smartphones to choose from than TVs, you more or less know what you’re looking for – price, brand, features and the likes. Interestingly, these specifications are what you’d need to look out for when buying your new TV. Although Skyworth has been around in South Africa for a few years now, it’s still not as widely known as some of the other major brands. I received the Skyworth SUD9300F 50” Android TV for review a couple of weeks back, and after spending time with it as a daily drive, there’s a lot to unpack.

Looking back a year ago, you may recall that I previously reviewed the Skyworth SUC9300 50” Android TV. Yes, the SUD9300F is the successor to this unit, bringing with it a few upgrades and refreshed pricing. However, if you already have the former, is it worth switching it up for the new unit?

Also, if you’re in the market for a new TV, is it worth switching to the Skyworth brand?

Focusing firstly on the design, there’s very little in the way of changes. Unless you’re going to be matching them up side-by-side, as you can see in the comparison image (below), you’re not going to be able to see it clearly. There is, however, the slightest of differences to the Skyworth SUD9300F 50” Android TV.

Looking at the unit head-on, you’ll notice the change of colour on the frame and legs. The previous unit had a lighter silver finish. This has been swapped out for a darker finish, more of a gunmetal silver. Then, looking below the panel, you’ll notice that the receiver hub is about twice as long on the new unit. If I’m honest, there’s not much detail about why this is. My assumption here is that the microphone and other receiver tech have been enhanced a little over its predecessor.

The rest of the Skyworth SUD9300F 50” Android TV is near identical. The rear cover looks the same and the weight is matched at 9.2KG each. So, if you’re upgrading from an older unit, you then wouldn’t need to change anything in terms of housing the unit or place it on a stand.

The panel measures 1113x75x647mm. With the stand, this increases to 1113x237x712mm. It also features the same ports and connectivity as the previous TV. This includes x1 RFI, x1 composite (3.5mm), x3 HDMI 2.0, x1 Optical, x1 LAN and x2 USB 2.0. In terms of wireless connectivity, it includes WiFi 2.4Ghz and 5Ghz, Bluetooth 5.0, as well as Chromecast. You can also use other wireless sharing technologies to share the screen or videos from your smartphone.

Overall, it’s a slight improvement on the design front of the Skyworth SUD9300F 50” Android TV, with the build and ports remaining almost identical.

As with most TVs, the biggest upgrades will almost always come in the form of the panel. This is where most of the technology lies, as well as on the motherboard to power the panel.

As you can tell from the above table, the Skyworth SUD9300F 50” Android TV has seen a small enhancement on the display. While the size, resolution and frequency remain the same, the response time, brightness and contrast ratio have seen an improvement. For most users, however, this will be a tough spot. Still, gains are gains.

When it comes to the setup, the Skyworth SUD9300F TV is just as easy to manage. Being as light as it is, it’s easy to remove from the box and screw in the feet once rested on a flat surface. This wasn’t something I had mentioned in the previous review, but it’s always welcome when you’re able to unbox and install a TV without requiring additional assistance. However, it is worth noting that this is a 50” TV, so anything larger may become an issue.

Configuring the Skyworth SUD9300F 50” Android TV thereafter is a breeze. There are two options to do this, one using the native prompts on the TV itself, with the other, simpler approach being the use of your Android smartphone.

Signing in using your smartphone shaves off some time, following the prompts, downloading the WiFi password, signing into your Google account and more.

Using the on-TV prompts without the use of the smartphone takes a few additional steps. It’s also a lot trickier when having to type email addresses and the many other passwords, like Google, WiFi, Netflix and more. I’d advise against this option.

When comparing the unit to its predecessor, the Skyworth SUD9300F 50” Android TV will come out on top. You will, however, need to have side-by-side comparisons and some metering equipment. That said, the enhancements are there on paper.

Against other more formidable competition from more established brands, it’s still able to hold its own. With the HDR support, 4K resolution and 8ms response time, the panel is quite solid. The darks are fairly dark, and the colour representation is also good overall. It does lack a bit of contrast with lacklustre greys. A few tests on a black screen, light uniformity and you’ll see slight light bleeding on the top end, and a bit of discolouration on the bottom left quadrant. However, these are only really slight and many won’t note these shortcomings, and if they do, can easily be ignored.

Where there is room for improvement with the Skyworth SUD9300F 50” Android TV is the frequency. At a standard 60Hz, there are quite a few modern panels that support 90 or 120Hz refresh rate. This is most evident when playing games or watching sports. While the increased response rate does help a bit, there’s still some motion blur and ghosting when there’s fast-paced action onscreen.

The Android TV experience is still great. It still uses the same Android TV 10 OS, which isn’t an upgrade over the previous unit, although there have been a few minor upgrades for both TVs. Switching between apps, having control from your Android smartphone, as well as the easy-to-use Chromecast makes it a joy to use. I also found myself using the remote control for voice commands over the previous unit, which works a lot better this time around.

Finally, the speaker system in the Skyworth SUD9300F 50” Android TV is also very reasonable. It houses two 10W speakers on the rear, which push audio downwards. There is sufficient bass and highs, with the mids being rather tame. It works good enough for sports, YouTube and the likes, but does fall a little short when it comes to movies.

Should You Buy the Skyworth SUD9300F TV?

The little question still remains. If you’re looking for an upgrade of a non-4K TV, then the Skyworth SUD9300F 50” Android TV is a great option when purchasing your 4K unit. If you already have a 4K TV from another brand, the key thing to look out for is the frequency and contract ratio – if they’re equal or comparable, then it’ll most likely come down to price.

And there aren’t many other brands that are going to be competing in that regard. The Skyworth SUD9300F TV is available for an affordable R7,999. This is, obviously, dependent on where you’re looking to purchase it from.

If, however, you’ve already bought the SUC9300 unit, then you won’t find too much in the way of notable improvements to warrant an upgrade. That said, the SUD9300F comes in at a more affordable price point than its predecessor in the current market.

The Skyworth SUD9300F delivers great performance at a very reasonable price for a 50” 4K Android TV with HDR support. However, there’s not much in the way of improvements over its predecessor to warrant a new purchase.