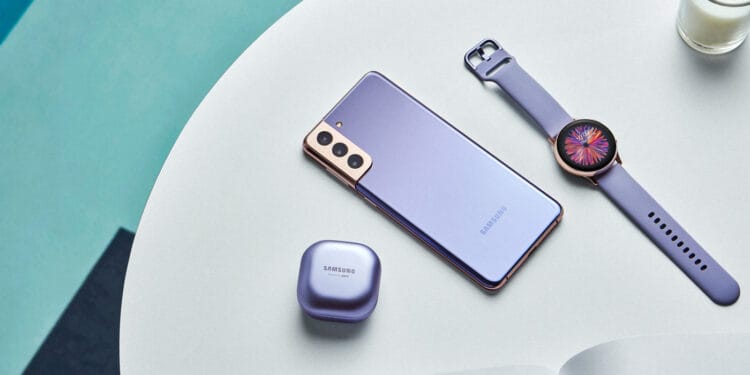 Year on year we’ve come to expect the latest flagship to be released by some of the leading manufacturers in Q1 of the new year. Most of this was reserved for the annual Mobile World Congress, usually around mid-March. With the event being cancelled in 2020 and it being shifted to a virtual event, Samsung took the opportunity to change things up with its first Unpacked launch of 2021. A few weeks into the year and we were treated to a New Year’s gift with the launch of the Samsung Galaxy S21 series in mid-January.

In addition to this, we managed to get our hands on a review unit of the Samsung Galaxy S21 Plus. The Plus is the middle sibling between the more powerful Galaxy S21 Ultra and the base model, Galaxy S21. Unlike its previous launch event, Samsung focused heavily on new features on the range, as well as the rich ecosystem of apps and partners to bring the best content creator options. 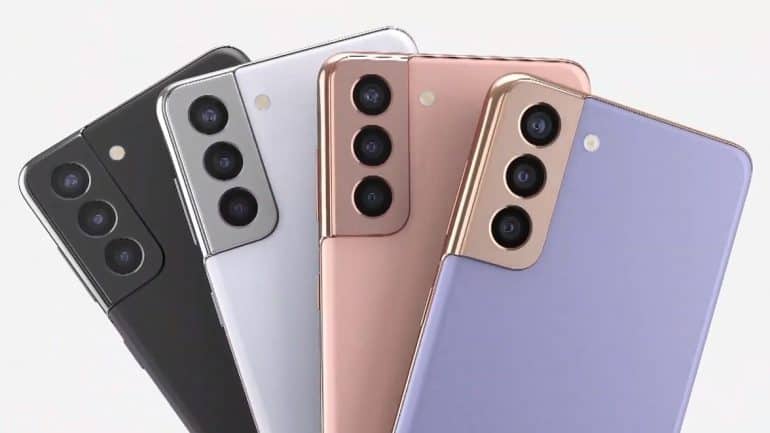 As with many of the Samsung Galaxy smartphones over the past few years, the Galaxy S21 Plus doesn’t stray too far from the mould. Without holding it in hand, you’d simply think that it was a copy and paste effort over the previous S20 range. However, there are a number of subtle changes that make it different.

It may not be the most obvious, but the first of these changes is the front screen. In previous models, Samsung took the approach of a curved finish, which meant that the edges tapered out. This made for a smoother feel, but also had a few issues with accidental touches as the edges still formed part of the screen.

One of the biggest changes lies on the rear. The housing for the camera layout has changed quite dramatically. Both the S21 and S21 Plus models have the tri-lens camera setup, housed in an elevated casing, with the flash off to the right. The S21 Ultra model has a much bigger casing. Camera housing has never been flush for quite some time now on the rear of smartphones. They only appear to be getting larger as more performance is sought from modern smartphone lenses.

The button configuration and layout of the Galaxy S21 Plus remains in line with that of last year’s S20 range. The volume rocker is positioned on the top right-hand side edge, with the power button slightly below that. The power button doubles as the Bixby key when powered on. The 3.5mm jack was omitted a few iterations back and remains that way, with no microSD card slot either. Instead, it’s swapped out for a dual-SIM approach.

Although not a build or design feature, another point of topic is the package contents. As seen from Apple for its iPhone range, Samsung has also jumped on board with the “eco-friendly” approach. This simply means that they’ve not included a charger for users, making it a question on whether you sell your previous model with the charger, and whether it’s a requirement when selecting Samsung’s trade-in option. 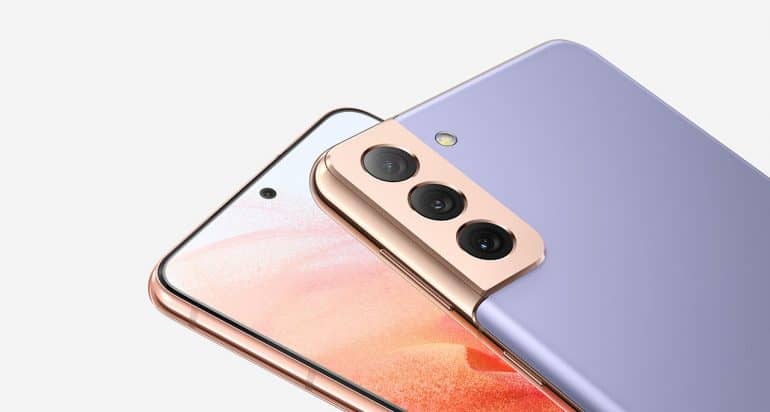 Samsung flagship smartphones have become synonymous with great screens. So, you wouldn’t accept anything less than a screen that’s right up there. And that’s exactly what we’ve got with the Galaxy S21 Plus.

The screen is 6.7” in size with a Dynamic AMOLED 2X panel. Its display has a resolution of 2,400×1,080px. This equates to 394ppi pixel density. What’s surprising to me is that is markedly lower specced that the Galaxy S20 Plus. The resolution has decreased from 1440x3200px and a 525ppi pixel density. As I’ve mentioned numerous times previously, most users won’t notice the difference in real-world settings. I assume that Samsung are aware of this and cut the specs a tad to save on costs of an ever-bloated smartphone pricing.

On the other end, Samsung has introduced 120Hz adaptive refresh rate to the party. If you’ve been following the development news over the past year or two, Samsung has been having issues in delivering a higher refresh rate on higher resolution screens. On their previous models, the resolution required to be dropped before the 120Hz refresh rate could be enabled. Samsung has simply removed that option on the latest smartphone.

On the Galaxy S21 Plus, Samsung has reverted to a flat-top front face, which was last seen quite a few years ago. If, like me, you’re using Samsung’s gesture-based setup with no navigation bar, it makes things a lot easier. The device is able to pick up those edge gestures as the ‘back’ and ‘multitasking’ options. It does take a small knock of 2% down from the 90% screen-to-body ratio, but I’d much prefer this approach.

Despite all the changes, the screen is still bright, vibrant and colourful. It meets all the expectations of a great visual experience as it should. And that’s all that matters. 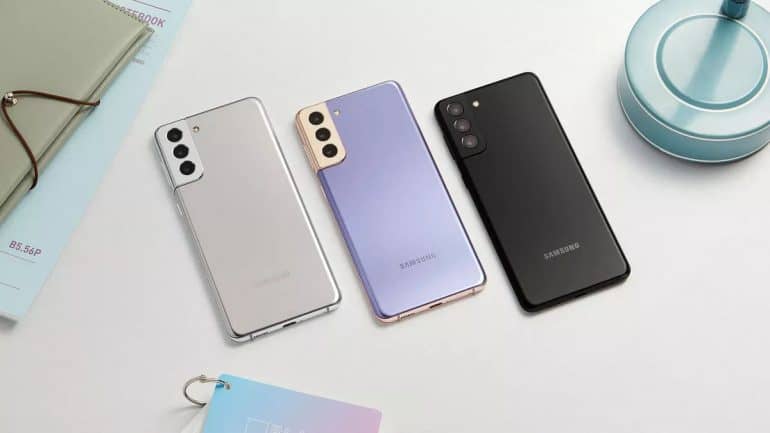 Again, another of the mainstays on the flagship Galaxy range. As is always the case, South Africa has the international variant with the Exynos chipset. This time its the Exynos 2100 (5nm). It has an Octa-core (x1 2.9GHz Cortex-X1, x3 2.80GHz Cortex-A78 and x4 2.2GHz Cortex-A55). This is coupled with a Mali-G78 MP14 GPU, 8GB RAM with two variants when it comes to storage. The storage capacity choices are the 128GB and 256GB versions.

The Exynos chipset has always been one of the most powerful around. In last year’s comparison between the Eyxnos and Qualcomm chipsets, the Exynos was by far the more powerful when it comes to benchmarks. The gap has been narrowed on the S21 range, although the Exynos still reigns supreme. As such, you won’t be found lacking in that department on either variant of the device.

Through the stress tests, the device performed as it should, even with the 120Hz screen. It’s buttery smooth with a snappy experience. There aren’t any jitters, lag or anomalies to report.

With its 4,800mAh battery, you’re almost guaranteed to go through an entire day unhindered. On a few occasions I took the device out for the day to shoot video content. Having charged the device prior to leaving home, as a precaution, upon return there was little dent made in the battery. Even after hours of filming, I still had well over 60% charge left, despite a period of a warmer than usual phone.

Without the battery within the contents, it’s become more important for users to know their types of charges around the home. With most third-party chargers having a 15W rating, to get the fast-charging support you’ll need to be looking at Samsung’s 25W or 45W options. Samsung has always sold these separately as required, but I imagine there may be a few more sold going forward. 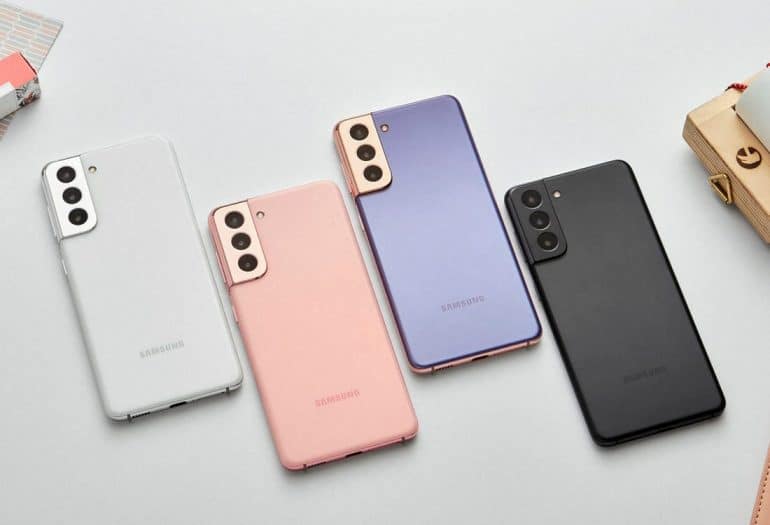 The Galaxy S21 range features the latest Android 11 OS, coupled with Samsung’s One UI 3.1 build. The experience is pretty much similar to that of your previous Samsung Galaxy smartphones, so the experience won’t be foreign.

One of the first noticeable changes is the removal of Bixby from the left-side menu next to the homescreen. This has been replace by Google Discover, which is essentially Google Now. Samsung does provide the option of selected Samsung Free, a mix of news articles and Galaxy Store applications. Comparing the two, I’d say that Google Discover is far snappier than Samsung Free, which requires 1-2 seconds to load before it’s usable.

There are loads of tweaks in the animations, menus, options and more, although each are fairly subtle. It’s not a huge overhaul, but you can see and feel the difference. One of the features I like is how it promotes new features to the fore, making it easier for you to use them. I wasn’t sure whether this existed before, but when being used as a WiFi hotspot for other Samsung Galaxy smartphones, it remembers this relationship. As such, you can request that hotspot from the other device when it’s not powered on.

Over the years, Samsung has dealt with the negative criticism on software bloat by removing its own apps, allowing users to download them from Google Play or Galaxy Store. It has, however, gone back on this in recent years, but not for its own apps, but rather that of Google and other 3rd-party apps such as YouTube Music (which I do use), Facebook (not so much) or LinkedIn (never via the app).

On the Galaxy S21 Plus, Samsung has continued to use last year’s hardware. It’s not all the same, however, with a few tweaks here and there, largely thanks to the software. This is good news for those users on previous Galaxy models, knowing that these features may be available on their devices at some point – if Samsung chooses.

One of the features that make a return, with some updates is the hybrid zoom technology. The telephoto lens offers just 1.1x optical zoom, but with the 64MP sensor, it increases to 3x hybrid zoom and even holds up well at 5x digital zoom. Beyond this, the images start to deteriorate, despite the option of up to 30x zoom. At that level of zoom, you’re pretty much staring at coloured pixels.

As always, the colours really stand out on the Galaxy photos. They look even better on the Galaxy S21 Plus screen. Its vibrant and bold colours make it a pleasure to snap and view the results. Photos in daylight are no doubt the best, being able to rival many of the top flagships. The low-light photography is also something to enjoy. There’s quite a lot of editing behind the scenes in the software in night-mode photography, and they pay off. There may be some grain and noise as a result, but still manages to extract great detail and even colours in low-lit environments.

One of the key additions to the camera app is the Director View. This addition to the toolset makes it handy in previewing content prior to being shot. There are a few options to use, from picture-in-picture, split-view or single view.

In terms of video capabilities, the Galaxy S21 Plus offers 30fps HDR10+, in addition to 8K 24fps, 4K 60fps, 720p 960fps for slow-motion. There are quite a few options to choose from to suit your style, with the only real gripe was that I’d hoped for at least 30fps in 8K.

The Galaxy S21 Plus is a very good smartphone. It doesn’t have all the bells and whistles of the much more powerful and feature-rich Galaxy S21 Ultra, but with a significant price difference, it gets the job done.

As the theory on middle children goes, they often lack the same visibility as their older and younger siblings but are better for it in the long run. With the Samsung Galaxy S21 Plus, that analogy rings true. It’s reliable and has everything fans would want. If you’re not looking for the Ultra’s quad-lens camera and S Pen support, then the Plus is the perfect device.

The Samsung Galaxy S21 Plus is a great smartphone, a mid-range unit between the new S21 range. It offers a decent amount of value, although with a few cost-cutting measures such as the downgraded screen and lack of charger in the box. With a clear focus on content creation going forward, there’s a lot to love about the smartphone.