Is the update to the 2019 game worth your while? 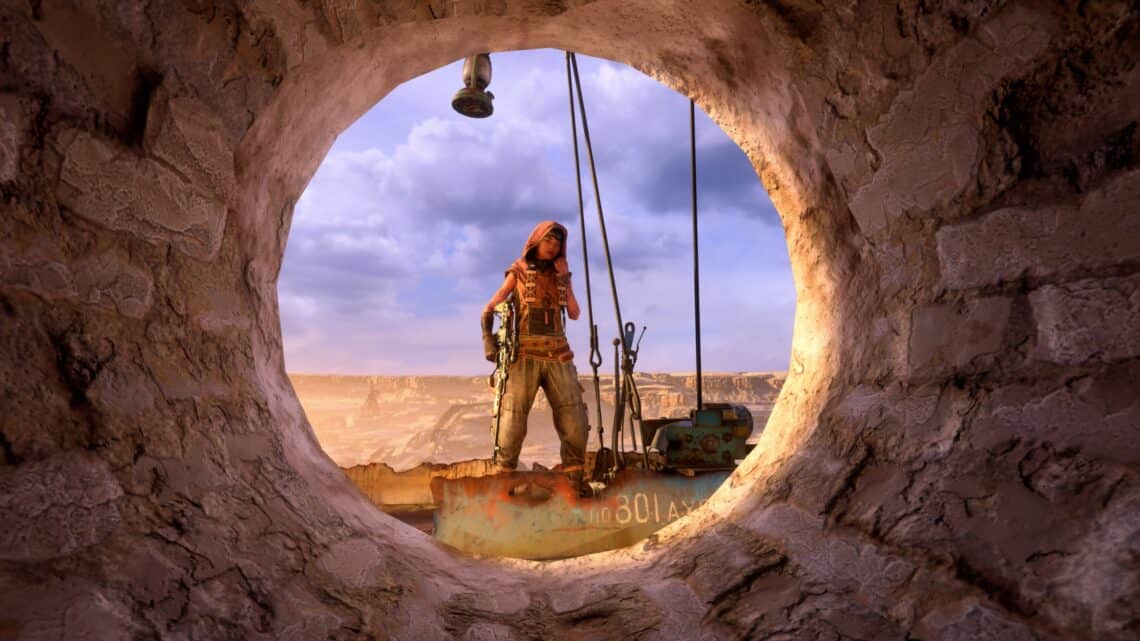 I have a high standard when it comes to first-person story-driven experiences. My top 2 games of all time are Bioshock and Portal 2, both of which are phenomenal games. So, going into Metro Exodus on the PlayStation 5, I set the bar really high.

Since I never played any of the previous Metro games, I have gone into this third entry into the franchise with an entirely fresh perspective. In fact, I am surprised I missed this game, especially considering it calls itself “an epic, story-driven first-person shooter from 4A Games that blends deadly combat and stealth with exploration and survival horror in one of the most immersive game worlds ever created.”

But is that all marketing or is there some truth to it all?

I will say upfront, I was wrong about Metro Exodus. I thought it was going to be a boring and cheap Russian post-apocalypse adventure through the underground train system.

Instead, I was quite surprised by Metro Exodus on the PlayStation 5. 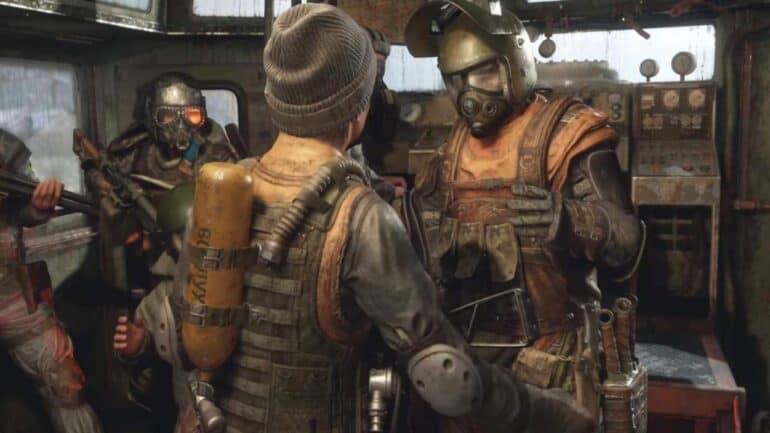 As the name suggests, it is time to leave the underground that has housed our characters for some time, into a country that has been ruined by the war. Breathable air is hard to come by, and our main protagonist in Metro Exodus dreams of living somewhere where that is no longer an issue. Convinced that this dream can become a reality, he talks his wife, his father-in-law and a crew of soldiers into venturing out with him into the unknown.

Bad air isn’t the only thing that the group have to worry about in Metro Exodus, however. There are mutants, cannibals, violent religious extremists, and many other colourful people that want to kill them. Their destination isn’t close either, but they find themselves a fully functioning train and that gets them going.

I will admit, while the premise is interesting, it took me a while to get into the story. The writing isn’t bad. In most cases, it is very good. But Metro Exodus suffers from pacing – especially with the long-winded conversations that are happening around you. I say around you because you are completely mute, even though in the loading screen your character is talking out loud about what he is writing in his journal.

This kind of storytelling can be a hit and a miss for me though. You feel entirely unattached because the characters keep making decisions for you and keep putting words in your mouth. There are games where good writing and premise can let you get away with a mute protagonist but Metro Exodus isn’t one of them, especially considering how heavy the dialogue is. Of course, this meant that the passengers on the train did have some special moments that made the fight for a better home for them more enticing. The game does write interesting characters. Not the entire crew are rememberable mind you, but there are some good standouts and some good villains you’ll encounter – from a religious zealot in a swamp to a slave-owning baron in a sandy wasteland. However, their characters are never used to their full potential, ultimately leading to disappointing conclusions to their short moments.

Where the slow moments in Metro Exodus do work sometimes, is when you find a friend on a train and enjoy a cigarette or when you find a zany pirate captain and have a drink with him. Slow moments can absolutely always be welcome when it works. They are not meant to draw out a conversation.

I do think the narrative in Metro Exodus gets more right than wrong though. There is a lot of good storytelling in this 15-hour campaign. We are just left with too little in some parts of the game and then too much with the others, which resulted in a tale that was great but unbalanced and poorly paced. 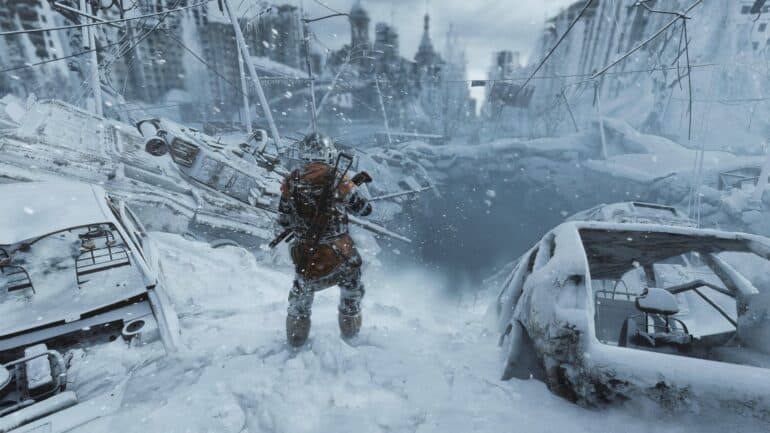 Know Thy Self, Know Thy Enemy

Metro Exodus can’t decide if it’s a slow-paced survival horror or an action-packed shooter. I think it shines when it tries to be a shooter extravaganza, with moments that feel like you are in a Call of Duty (but you know a good one). Just like the story, when it slows down, it’s not bad. It’s just too much.

Even on the PlayStation 5, Metro Exodus feels like you are playing an Xbox 360 game, especially in terms of gameplay.

When you are showering your enemies in bullets, the game can be loads of fun, just like classic shooters. Also, the weapons feel really good to shoot, and some realistic elements of the guns are also beautifully animated and flaws of said guns impact you directly – such as when a gun jams. Each gun feels different. Like the revolver and its individual bullet reloads to the shotgun’s explosive kick.

The PS5’s DualSense also helps immerse you in the idea that you are really shooting a gun. The shot trigger resists your finger, just like a real trigger would, and even the vibrations give you lifelike feedback. I say similar things every time I write about a game that takes advantage of the DualSense but it really helps with the experience immensely. 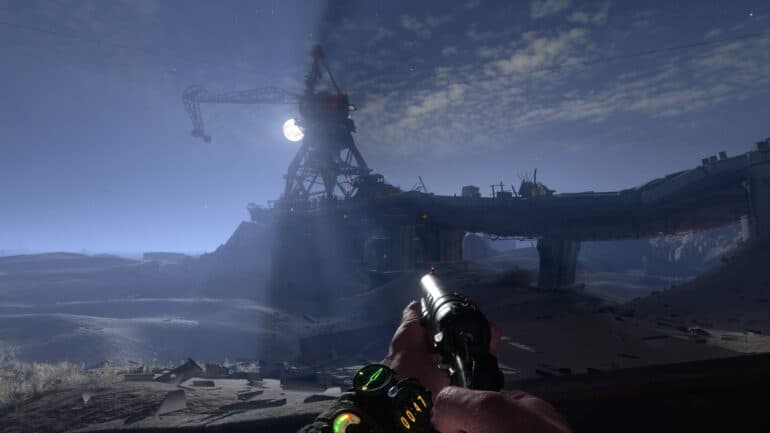 Yes, on the one side you can be Russian Rambo with your assault rifles and molotovs flying everywhere but you can also be a stealthy Russian ninja in the dark. It is a bit basic, with your typical crouch and stab kind of gameplay. It does get more interesting when you get a crossbow. I absolutely love it when games introduce that kind of weapon and then even more so when you realise that if you choose to not stab them but rather knock them out opens up opportunities where your enemies will surrender.

The fact of how you can influence how your enemies react makes for some good varied gameplay situations. Frustratingly, they can be very stupid. There are countless moments where I took out a man right next to his friend and his friend sat there as if nothing happened. So when I threw my blade at him it felt undeserved.

However, the humans are not as mindless as the mutants. They are boring to kill because they just run at you and you just shoot them down. There are very few variations, and while some look different, they mostly attack the same. You do get some cool moments where they overpower you and you got to tap a button till they get off, but they are unfortunately repetitive and uninspired. The big ones are just bullet sponges and the flying ones are just annoying. They also don’t leave resources behind like humans do, which I guess is realistic, but there is just no insensitive to destroy them.

Talking of resources, you can use them to fix and clean your weapons in Metro Exodus. You can find attachments that improve your weapons. However, the most exciting thing about weapon upgrades is when you find new ones. It’s not bad, just very shallow weapon progression. You also need to worry about your gas mask, making sure you have enough filters, but I never felt like I ever could run out. However, that might just be because I was on the easy difficulty. It adds to the atmosphere given you can see the impurities of your mask on your tv screen but never really directly impacted gameplay for me. 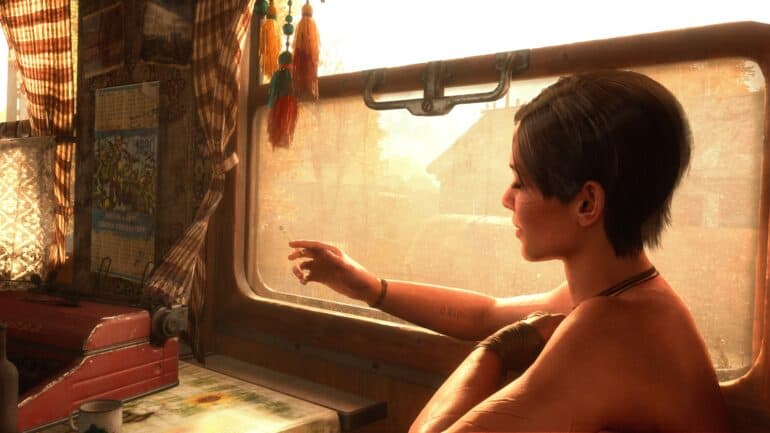 On the PlayStation 5, Metro Exodus looks like a very impressive Xbox 360 game, except running at 4K 60FPS. It is not a bad thing, but you can tell this is a bit budget compared to a Sony-level game. Thankfully, it makes up for it by sending you on a journey that takes you to some interesting places with some being linear and some being kind of open world.

Linear locations are straightforward, and probably when I enjoyed the game most. Metro Exodus can ooze with the atmosphere when it is concentrated like it does when it is a straightforward path. That kind of focus does wonders for the game, you can tell that is what the developers know best.

When the locations are more open world, they aren’t bad, just lacking any kind of detail. Feeling often times bare rather than fleshed-out worlds to explore. In the swampy area, you get around in a boat, and it is very slow and mostly I found myself rather running around the damn than putting myself through another snail boat ride.

In the desert wasteland section, it gets more interesting because it introduces a car and zip-line traversal. Making those moments of exploring enemy hideouts more compelling to want to get to, rather than just sprinting to the next main mission.

Thanks to ray tracing, lighting is incredible in Metro Exodus. From your flashlight that helps you see in the dark underground tunnels to the moonlight shining the way for you in the desert, it’s all really well done. Using your lighter to burn away spider webs looks gorgeous and Molotov’s fires burned bright.

The team behind Metro Exodus has a lot to work on in terms of detail and world-building, but when they pivot to direct pathways the game truly shines as well as its ray-traced lighting on the PlayStation 5. 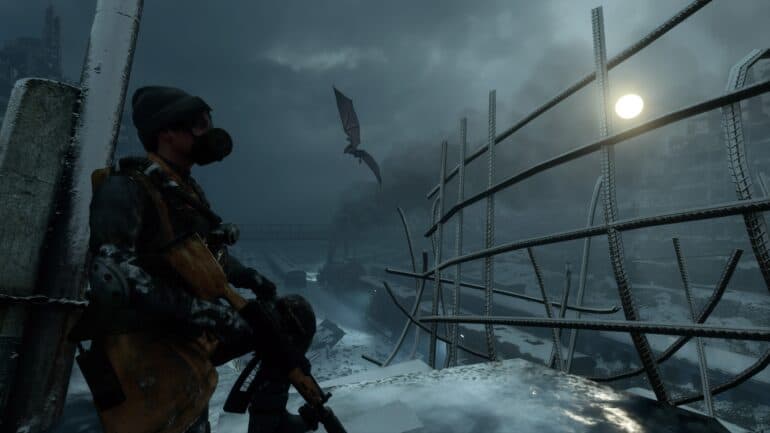 Final thoughts on Metro Exodus on the PlayStation 5

I want to say while I did have a lot of issues with Metro Exodus, I really enjoyed the single player trip I got to go on. It never really reaches the highs of the excellent first-person games I have cherished but does enough to warrant a recommendation if you have played all the “must-plays” out there already.

Metro Exodus on the PlayStation 5 is great most of the time, even though its lows can be borderline average at best and bad at worst. Those lows are few, and shouldn’t scare you away from this train ride across the USSR.

Metro Exodus is a great post-apocalyptic FPS that does a lot more right than wrong, but its flaws are enough to keep it from being excellent.