Home > Movies > Man of Steel 2: Superman Villains We Want In The Sequel

Who could go against Henry Cavill's Superman next?

If there ever is a Man of Steel 2, who would be the villain to challenge Superman? Would they be a single entity or a villainous team? Here are our picks for who could be used as the DC villain or villains in a Man of Steel sequel.

General Sam Lane, father of Lois Lane, is not an outright villain but his disdain for meta-humans and for Superman could be inspiration for Man of Steel 2.

The General’s blind zeal against Superman could have him team with a true villain like Lex Luthor or Metallo. Believing the ends justify the means, General Lane could go too far. The tension between Lois, Clark and her father could be the dramatic glue holding the film together.

In modern comics, Mongul is only slightly weaker than Superman. They could go toe-to-toe against one another, offering epic battle scenes. Man of Steel 2 could have the evil warlord teleport Superman to Warworld, Mongul’s war planet. Superman would be forced to fight as one of Mongul’s gladiators. This gladiator premise would only have to be a slight focus of the film though, otherwise comparisons to Thor: Ragnarok would be heard forever.

Mongul is an enemy of Hal Jordan as well. Perhaps Green Lantern could be reintroduced in Man of Steel 2, Hal joining Superman in a galactic space battle against the warlord. The Black Mercy, a hallucinogenic, magic, alien plant which gives its victims their every desire is one of Mongul’s favourite weapons. A sequel could touch on The Man Who Has Everything storyline where Superman falls prey to Mongul and the Black Mercy.

Metallo, the cyborg with kryptonite power source in his heart, is one of Superman’s most iconic foes. Depending on which comics you read, John Corby is either a journalist, petty thief or a soldier under command of General Sam Lane.

Metallo can offer a real threat to Superman in Man of Steel 2. It’s debatable if he would be used as the only villain or if General Lane and Lex Luthor would be pulling the strings behind the scenes.

It’s tricky to include Darkseid for the sequel. Batman v Superman and Justice League teased the uber-villain. The failure of those films might have made the studio hesitant to use him. If he were to feature in a sequel it would force a Justice League War storyline. For Darkseid to re-emerge as a threat much groundwork before Man of Steel 2 would have to be laid. The epic nature of a Superman, Darkseid battle would be the stuff of dreams.

There are several versions of the character but what they all have in common is the ability to temporarily absorb the life-energy, superpowers and knowledge of their victim. The most popular adaptation has Rudy Jones as Parasite, his latest live-action appearance being in the CW’s Supergirl series.

In Batman v Superman (2016), Zack Snyder or Warner Brothers dived in too deep with Doomsday. They could have used him for one of the sequels to Man of Steel. They took out the big guns too early in Superman’s arc.

Having bitten off more than they can chew the studio should lower the stakes, simplify the story and use a less high-profile villain like Parasite. Though less of a threat than Doomsday or Darkseid, Parasite can still challenge Superman, due to his abilities to neuter and mimic abilities and powers.

Neil Quinn a.k.a. Ulysses was created by Geoff Johns and John Romita Jr in Men of Tomorrow. As a boy, Ulysses’ parents thought the Earth was doomed. To save him, they sent him into the fourth dimension. Once there, he developed superpowers.

Ulysses and Superman have similar origin stories and in Men of Tomorrow they start off as kindred spirits. The friends have a falling out. Although they share much in common, their views and understanding of the world and of humanity could not be further apart.

Adapting Ulysses for Man of Steel 2 could see the exploration of Ulysses’ fourth dimension homeworld. The budding friendship between Clark and Neil could be used to simplify and ground the storyline. Any Man of Steel sequel might have to scale things down after Batman v Superman and Justice League.

Clark and Neil’s disparate world views could be used to further show the alien, Kal-El’s love for humanity. His heroism contrasted against Ulysses’ betrayal and abuse of power.

Savage is not one of Superman’s primary adversaries, but Vandal’s presence is all over the earth. His wicked schemes forever fomenting strife and suffering. Vandal’s immortality and constant manipulation of world events means he has incredible potential as an onscreen villain.

In Superman #50, Vandal discovers from the Krypton archives in the Fortress of Solitude that Superman’s ancestors caused Vandals creation when they deflected a comet heading for Krypton. The meteorite crashed on Earth instead, transforming a pre-historic Neanderthal into Vandal Savage.

Vandal’s disdain for Superman springs from the hero’s affection for humanity. Instead of enslaving humanity and ruling over them, Superman humbles himself and serves them. When in Savages’ eyes, it should be the other way around. Exploring these concepts while including a few other heroes like Flash or Green Lantern, sounds quite exciting for Man of Steel 2.

Manchester Black is a powerful supervillain sometimes antihero. He has telepathic and telekinetic abilities can read and control minds and cast illusions. Black is a leader of a super-powered vigilante gang, called The Elite, who dole out extreme forms of justice which are often at odds with the merciful approach of Superman and the other heroes.

The animated film, Superman vs. The Elite is based on, What’s So Funny About Truth, Justice and The American Way? This comic explores Superman’s moral and ethical struggles. Manchester Black’s telepathic abilities would look really cool on film and his merciless justice would create the dramatic tension needed to explore Superman’s high ideals and why they are so important for inspiring Hope. 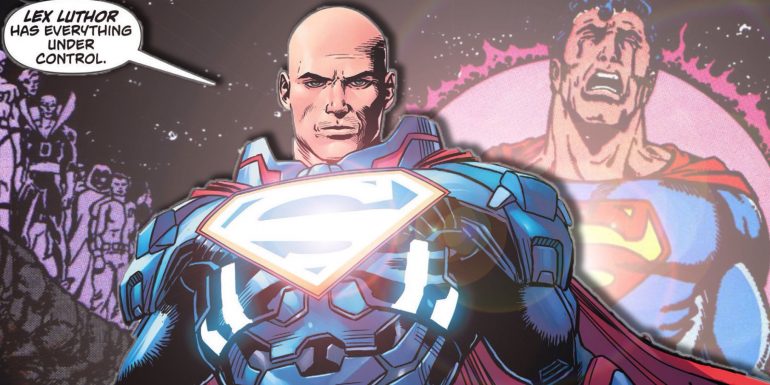 There is no Superman without Lex Luthor. Unfortunately, Batman v Superman toyed too much with Lex’s character, Jesse Eisenberg’s interpretation didn’t work and his casting as Lex was questionable.

If Lex were to return as a villain in Man of Steel 2, he would have to be re-cast or Eisenberg would have to change his approach depicting the character. Lex could team with General Sam Lane or Brainiac to destroy Superman. A deeper study of Lex and his insane genius would also have to be explored.

Fans are rabid for Brainiac to appear on film. Geoff Johns’ Brainiac storyline in Action Comics is an obvious reference for any Superman film featuring the alien A.I. Supergirl features prominently in it as well. She could appear with Superman on film and help fight against Brainiac. Lex could also feature, as he puts himself at Brainiac’s disposal, hoping to gain greater knowledge and power, while defeating Superman.

Superman has a varied rogues gallery which is often overlooked for film. Lex Luthor and General Zod being the two villains used most extensively. The damage done to the DCEU after Batman v Superman and Justice League has affected Superman and Man of Steel sequels, necessitating more traditional, straightforward villains-not that any of them are boring or lacking in any way. Weirder characters like Bizarro and Mr. Mxyzptlk probably can’t be used just yet.

In conclusion, let’s hope Man of Steel 2 is made and has one of these great villains.