Logitech G733 Lightspeed Review – A Change of Direction for Logitech 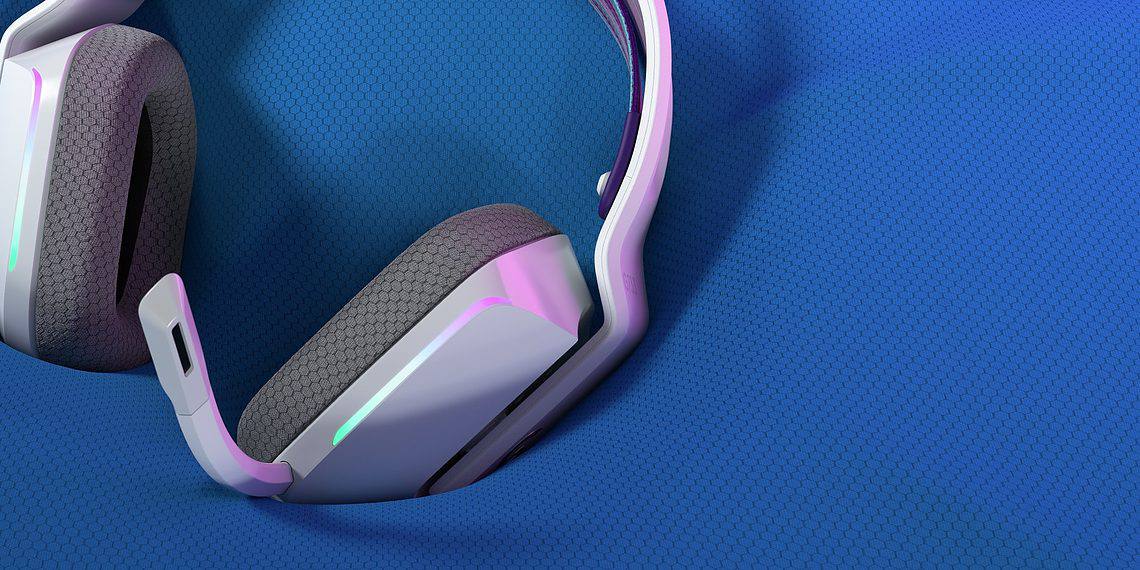 Each gamer has their favourite range of products from a particular brand. Whether it be your mouse, gaming keyboard or pair of headphones. You may even have a few brands you prefer across individual products. And that’s never a bad thing. But the chances are very high that one of those peripherals are from the Logitech portfolio.

The brand has delved into gaming gear for well over two decades having been in the tech market even beyond that. Recently, the brand upped its game when releasing the Logitech G733 Lightspeed headphones. The headphones are quite a change over its predecessors, but Logitech has kept its core intact. Has the gamble on these changes paid off? 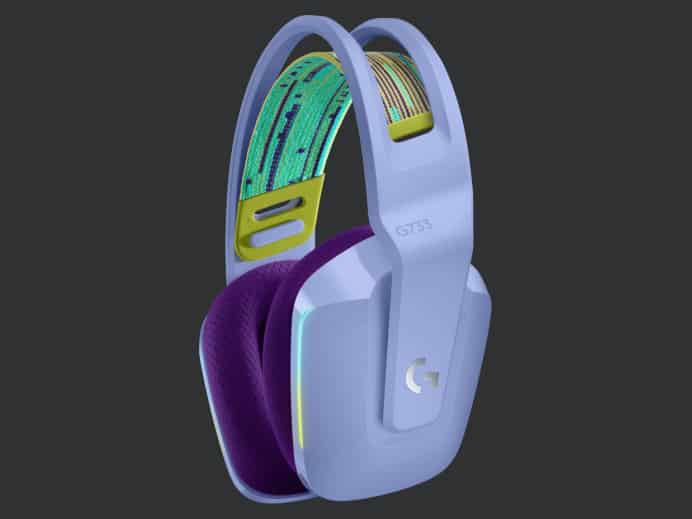 One of the biggest changes of the Logitech G733 Lightspeed is its breakaway from the standard Logitech design ethos. While many of its more premium, high-end gaming headphones feature more flamboyant designs, the G733 is more reserved. And I like that.

The earcups have a squared design, which is angled from the headband attachment. Speaking of which, the headband featured the same plastic build as the rest of the unit. It does, however, feature a removable, reversible elastic strap that attached just above the earcups on the inside of the headband.

The earcups themselves are crafted from a fabric material. It’s not the typical leather or faux leather approach we’re used on many premium headphones. On the front end of the earcups, Logitech has fitted some RGB lighting. Each is split into two sections, which can be customised using the software.

The right-hand side earcups is void of any buttons and ports. That’s all fitted to the left-hand side. This includes the Type-C USB port for charging, a volume rocker, mic on/off button, as well as the power on/off button.

The majority of the device is finished in a matte black coating, with only a section of the sides of the cups having some gloss to it. It weighs just 278g. That’s super lightweight, which means that you’ll be able to spend more time with the device comfortably on your head without noticing that it’s there.

The design looks great and, for many users, it will feel great, too. However, while it sits comfortably for me, I’d say with an average-sized head, I don’t believe it will be the same for slightly larger heads.

The one-size-fits-all approach fails here as a result of the headband not extending too far beyond its default setting. As far as I can tell, either side connected to the earcups only travels an additional 1cm. This makes will no doubt be a problem for a number of gamers, especially men. 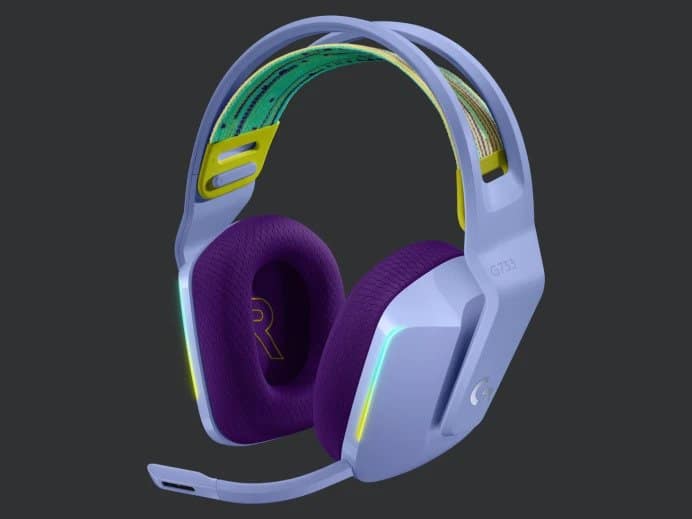 First, it’s the conventional cable option. Connect the Type-C to Type-A cable and the unit will turn on by indication of the LED lights. Once completed, you’re all set. It’s that simple.

Secondly, you can use the Lightspeed wireless option. The contents include a USB dongle, which you can connect to your device. Once you power on the Logitech G733, it will automatically pair. Again, very simple.

To get the most out of the device, you’ll need to install the Logitech G HUB software. This includes DTS Headphone:X 2.0 drivers to enable surround sound support. The requirement of the software to enable this does, however, mean that it isn’t available on your console. Unfortunately, you’ll have to settle for stereo sound as a result.

The software also controls other devices, such as the Logitech G102 mouse. Here you can setup features such as the RGB lighting sync to match both devices with the same lighting effects.

In addition, users can configure a host of options to fine-tune their audio experience. From the equaliser, the mic, acoustics and more. This really makes the Logitech G733 come to life, and would be rather flat without it. 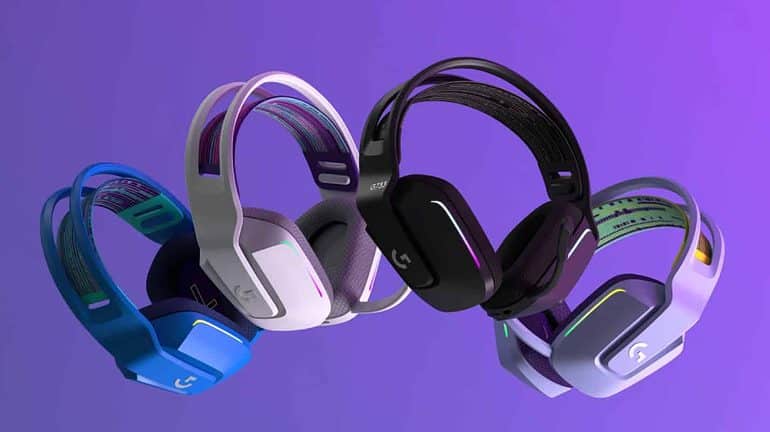 The Logitech G733 features two PRO-G 40mm drivers, one in each cup. The frequency response ranges between 20Hz and 20KHz. Impedance is measured at 39 Ohms (passive) and 5k Ohms (active). The sensitivity is 87.5dB SPL/mW.

Overall, these aren’t bad specifications to be carrying for a pair of gaming headphones. 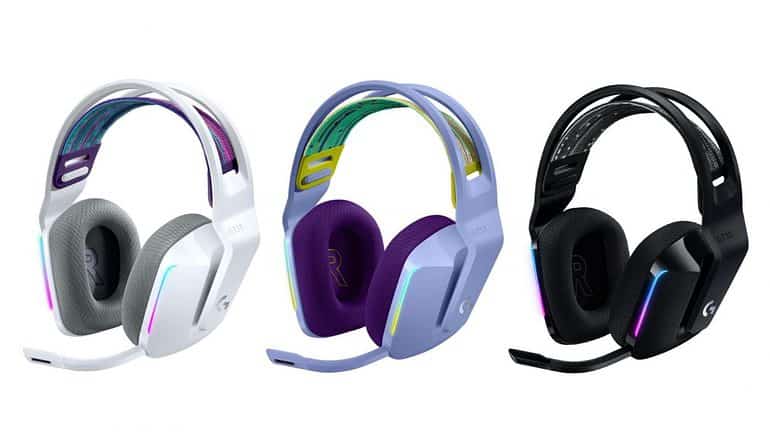 Using the default settings on the Logitech G733 Lightspeed, the first audio I tested was some music. This ranged from voice heavy to bass-heavy. For the most part, it performed well. However, I had to tweak the sound a touch to get the most from the playback. This included adding a bit of bass.

There are some presets that can be used to speed things up in terms of fine-tuning the experience, which worked well.

Using the software, I then enabled the virtual surround sound option. There are three options for multi-channel mode, including Entertainment, Gaming and Sports. Being a gaming unit, my preference was always for Gaming. However, if you want to listen to some music, it’s highly recommended to switch to Entertainment, as the audio will sound washed out without switching.

There are also four options for DTS Super Stereo modes, including it being left off, Front, Wide and Traditional. Here my preference leaned towards Traditional.

During my gaming sessions, the audio was great. Being able to track the various sound destinations is great under any circumstance, and especially so during FPS titles. The sounds were crisp and realistic, but at time felt a bit hollow.

Good, but not great overall, then. 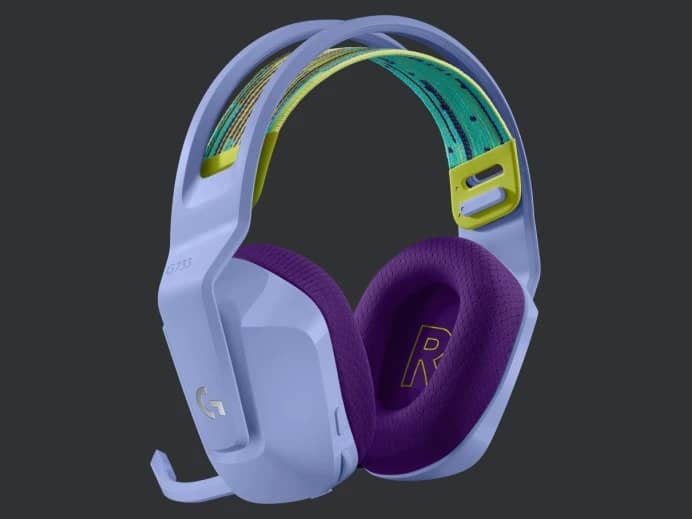 One of the standout features of the Logitech G733 is battery life. On paper, Logitech claims that the headphones should be able to go beyond 29 hours of use without the LED lighting.

During our testing, it wasn’t easy to test this and had to split it into portions. I was able to stretch the usage beyond 30 hours at one point and comfortably above the 25-hour mark on the other tests. This is great, as you’ll easily forget that the device is wireless to begin with, something made evident with continuous charging on many other devices.

Switching on the lights eats into the battery quite significantly. This drops the battery life to below 20 hours as a result. Still, that’s quite impressive given the extra bit of flair from the lighting effects.

The Logitech G Hub software provides an indication of the battery remaining on the headphones. There’s also a notable beep when the device has dropped below the threshold to alert you to it needing to be charged.

Logitech has made some bold changes to its formula for producing gaming headphones. The Logitech G733 Lightspeed is a definite change from this and, for the most part, good. The design is much sleeker looking, but not as premium on account of the all-over plastic quality. The RGB lighting effects scores some points back in that regard.

When it comes to audio quality, it depends on your setup. If you’re not going to be using the Logitech G Hub software, the headphones should not be on your list of wants. However, once you do install the software and enable the virtual surround sound, your gaming experience comes to life. It may not be as widely compatible for gaming and music at the same time, but some toggle switching within the software can fix this.

The capabilities are definitely there on the Logitech G733, but needs some polishing. At a price of R2,999, it’s not the most expensive but will take some consideration.

The Logitech G733 Lightspeed is a very good pair of headphones. However, it’s not the easiest sell carrying the R2,999 price tag it requests. I love the minimalist design and RGB lighting, which can be suitably customised. The Logitech G Hub software also brings the audio to life with virtual surround sound, and should not be considered an option if you’re not going to be deploying it.