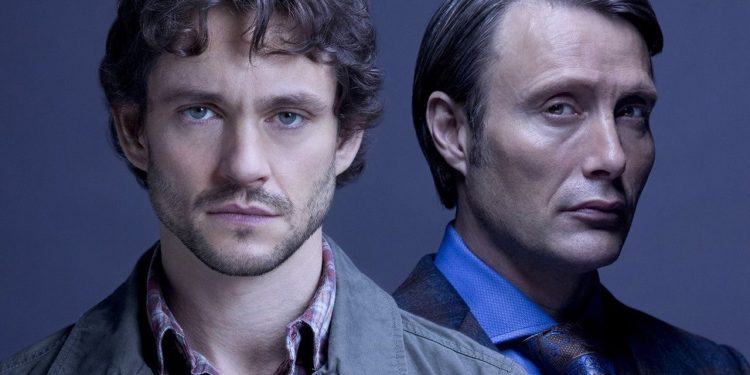 Rumours of a fourth season of Bryan Fuller’s Lynchian slow-burn psychological horror-thriller show, Hannibal, have resurfaced on the internet recently. The acclaimed series (based on characters and elements appearing in Thomas Harris’ novel Red Dragon (1981) and its sequel Hannibal (1999)) was unfortunately cancelled by NBC in spring 2015. But fans are still hoping for a renewal or a season 4 release of Hannibal on a streaming service, like Netflix (who have been “incredibly complementary to the show”.

“The work itself was brutal because we had long hours, with scripts coming in late. It’s TV, and what we were doing was elaborate. The texts were high-IQ texts. The monologues or the dialogues were always about fine art, music. You had to learn Japanese, Hungarian, and words you had simply never heard before. And you had to do it within two hours because everything came so late. Having said that, I would love to go back. Everybody wants to go back, and if there’s only one season and we’re sure about that, he can finish it in a proper, surprising, stunning way,” Mikkelson revealed in an interview.

Fans will recall that the show, known for its moody shots, surreal artistic visuals and cryptic imagery, ended on a shocking cliffhanger, with Hugh Dancy’s Will and Hannibal embracing as they fall off a cliff — after defeating the show’s antagonist, Francis Dolarhyde (Richard Armitage). And although it ended on a high note, for many, this “ending” felt a little unsatisfactory — leaving viewers to guess the outcome of the two beloved main characters. Did they die? Do they live?

Then there’s also the post-credits scene at the end of the final episode of Season 3, where we see Gillian Anderson’s Dr. Bedelia Du Maurier, Hannibal Lecter’s psychiatrist and colleague, about to eat her own leg. Was it more of the illusions, symbolism, and dream sequences we’ve become accustomed to with the franchise? Or did the notorious villain survive the fall? Are Special Investigator Will Graham and Dr. Lecter having her for dinner at the end of the third season of Hannibal?

Well, it seems leaving it open-ended has worked in the creators’ favour, as it gives them an opportunity to continue the popular show’s story with new episodes in a possible season 4 of Hannibal.

Also, like many shows that have found their way onto Netflix, the television series has gained a stronger following in recent years. Speaking about the potential of a season 4 of Hannibal on the Happy Sad Confused podcast, Mads said that because the show “has found a new home on Netflix… the talks have been revitalized” around another order of episodes.

What will season 4 of Hannibal be about?

In June 2016, showrunner Bryan Fuller (who failed to secure a deal with Amazon Prime for the show) teased a few ideas on where he planned for a new season to go. He also indicated that most of the cast, including Dancy and Mikkelsen, was ready to return. As it turns out, the creators were hoping and discussing how to incorporate Clarice Starling (either played by a black actress, or played by Elliot Page (previously Ellen Page)) and plot points from The Silence of the Lambs into season 4 of NBC’s Hannibal back in 2017 already.

As we now know, they failed to secure the rights and CBS developed their own show based on the character (which was initially made famous by Jodie Foster in the films starring Anthony Hopkins). Unfortunately, Clarice (40% on Rotten Tomatoes) wasn’t well-received, with many calling it a Hannibal knock-off. The general consensus was that the show was “effectively grim, but narratively bland”. The good news is that the first season of Clarice averaged a 0.32 rating in the 18-49 demographic and only had 2.76 million viewers (very low ratings). This means that it’s very likely to be cancelled. Even though there hasn’t been an official announcement regarding a second season, there isn’t a release date set as yet. Could this make the character available again?

Of course, according to creator Bryan Fuller (Dead Like Me, Pushing Daisies, Star Trek: Discovery, and American Gods), none of this really has an impact on Hannibal season 4.

“Martha [and] I tried many times to work with MGM to include Clarice into our Hannibal story. They ultimately told us they had their own plans for Clarice, and they didn’t need Hannibal to tell her story,” Fuller tweeted. “Don’t think this impacts a potential #HANNIBAL [season 4] as we never had Clarice rights,” he shared on social media.

Fuller continues to stand behind developing more of the show. “I think I’ve said that season four is Inception meets Angel Heart. And that means that there’s going to be considerable mind-palacing and obfuscating of reality, or at least the perception of reality. And the thing that I’m most excited about is, because there’s going to be such a mental landscape to explore, that means actors who play characters who have previously died can manifest in the mess of Will Graham’s brain.”

Fuller also believes that the show could still pick up after all these years — even if the actors are a little older.

“Whatever’s going on in Will Graham’s head and with his perception of reality and morality, it feels like however long it is before we get to dive back into the toy box, there is a narrative rationale for what could’ve happened in that period. So I don’t panic like we’re running out of time. I don’t feel like there is a calendar deadline for when we can return and at what point we can no longer return.”

The showrunner has also expressed his interest in exploring a twisted romantic relationship between the two main protagonists (now possibly on the run together) — even hoping that he had ended the season 3 finale with the two sharing a kiss. Perhaps this is something he will pick up in Hannibal season 4.

There’s no doubt that the fourth season of Hannibal would continue to explore the bizarre killings, strange happenings, and the uncomfortable relationships between the lead characters of the horror series. It would be violent, beautiful and delicious. Most importantly, we’d get to see more of series star Mads Mikkelsen.

And moreover, Frederick Chilton might finally meet a grisly fate.

Why the show needs to return

Over 200 000 people have rated Hannibal on IMDb and the average score of the show is 8.5. Starting as a prequel, Hannibal, arguably the best horror-thriller series of its time, was initially envisioned as a 7-part series (later cut down to six). Hannibal fans essentially only got half of that before the TV series was cancelled.

There’s so much more to explore in this twisted world. There are a lot more characters to meet. A possible fourth season (and maybe final season) could sum up everything that’s happened before and possibly even make room for more. Heck, we’re even interested in spin-off series based on some of the characters. How about a prequel show that follows Jack Crawford’s story? Or maybe a spin-off with Miriam Lass as she navigates this dark world?

Hannibal has gained cult status amongst viewers over the years. Mads Mikkelsen’s portrait of the iconic literary character Hannibal Lecter has haunted the dreams of many viewers. He’ll forever be remembered as one of the most interesting villains of all time.

If we ever get a Hannibal season 4 on one of the streaming platforms, we can expect it to be bigger and better than ever. Expect new twists, daring visuals, more bloodshed and a reinterpretation of the Will Graham we know (especially now that he has embraced his dark side) in a new season of Hannibal.

We want more, please. The award-winning show needs to be renewed for a 4th season. Keep signing those petitions.

Tell us, do you want a season 4 of Hannibal?