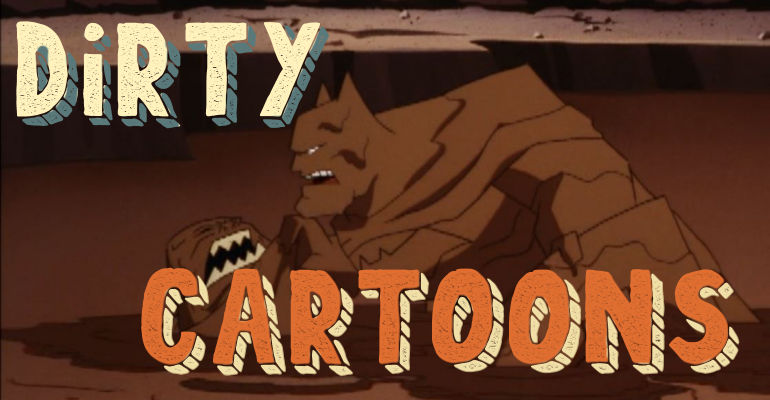 A Look Back At Some Of The Dirtiest Cartoon Moments

by Evan Saunders
in TV Series

We’ve all enjoyed cartoons at some point in our lives. In fact, we still enjoy it today. With the likes of Adventure Time, Amazing World of Gumball, We Bare Bears, SpongeBob SquarePants, and The Regular Show, there’s a great supply of cartoons to choose from. You’ll note, however, from this list that I’ve paid careful attention not to include some of the more R-rated, focusing instead on kid-friendly cartoons you can find on many different networks. Having said that, there’s a common theme among these so-called “kids” shows – an underlying, hidden element of adult humour, which rears its head every so often in glorious absurdity.

It’s safe to say that many of these jokes will go unnoticed by kids who are simply there to enjoy the quick laugh of slapstick comedy. For many adults, this makes for much more enjoyment as they’re often left to the devices of their kids’ tantrums, hogging the TVs whenever they can. In some cases, the humour is so intertwined that it appeals to both young and old, whether they’d like to admit it or not.

However, some of these cartoons may take things a little too far, depending obviously on your viewpoint.

10 Funniest Kids Cartoons of All Time

Remember These Video Game Cartoons From The ’90s?

’80s Cartoons Were The Best

The team at Fortress of Solitude take a moment to reflect on some of the dirtiest moments observed in kids’ cartoons.

The original show aired in 1993 but, given that this is South Africa, it aired on our shores some years later. While Animaniacs was filled with many dirty jokes, there was one moment that has always stood out for me. In this particular episode titled ‘Hercule Yakko’, a parody of Agatha Christie’s Poirot, the siblings are looking for clues, when Yakko instructs Dot to dust the crime scene for prints.

You can watch how it plays out in the clip below. How this was given the greenlight for a cartoon is beyond me.

In The Amazing World of Gumball episode ‘The Shell’, Gumball searches through Banana Joe’s house looking for his girlfriend, Penny, who literally comes out of her shell and loses control of her new-found powers.

What plays out on the screen is footage of an orange being opened in the middle, which may not seem like much, but given that Banana Joe is a fruit watching a fruit being manhandled, it becomes pretty clear what is actually happening in that scene.

While I was in utter shock at seeing it unfold, I rewatched it a few times and laughed over and over again. Take a look for yourself below.

Rocko and Heffer go to a jackhammer festival

In the Nickelodeon cartoon Rocko’s Modern Life, Rocko, a wallaby, and his pal Heffer, a cow, decide to go to a jackhammer festival. Now, the first thing that went through my mind as a kid was, “Why a jackhammer festival?” I still remember being utterly confused as to what the joke was. It was only later, when I was a bit older and re-watched the episode, that I noticed the “cleverly” written sign above the jackhammer ride that read: “Demo Pit. Jack All-U-Want”.

At first, I was a bit flabbergasted as to how this made its way into a cartoon, but my shock was soon replaced with laughter as I finally got the joke after all these years. This was just one of the many dirty little secrets in the Rocko’s Modern Life cartoon.

Harley asks Joker, “Wanna try some of my pie?” That’s just an innuendo, and not the worst I’ve ever seen. Still, that’s pushing it.

Yeah, they actually wrote “SNAFU” on the screen, and explain what the acronym means. Well, they pause on the F before saying it means, uh, fouled. Wow! Seriously, that’s just wrong! Why am I not surprised Chuck Jones did this?! But they could get away with so much more then!

Looney Tunes, I think (I Got Plenty of Mutton)

A ram stares at a sexy ewe (really a male wolf in drag) and his curled horns go, um, erect. And red. What the hell?! Yeah, this is about as subtle as an innuendo as brick through a plate glass window. Damn!

Goofy (Father’s Day Off) – Goofy stays at home while his wife is away, and gets a flirty visit from the milkman, indicating his wife is cheating on him.

Disney get a bad rap as being all family friendly these days, but they used to push the envelope. Again, this is just wrong! Okay, so it’s only hinted at, but…for kids!!! What the foulup?! Goofy’s wife is screweing around?! Eeeeeeh…

The Rescuers – the naked lady in the background.

Ah, this is a classic! I don’t know how the hell this got past the censors and I’d never advocate it in this day and age, but…seriously, as a kid I never even noticed, or if I did, I didn’t care. Looking at it now…wow!

Bugs Bunny and the Three Bears – a nude picture on the wall.

As a kid I never noticed. As an adult, seeing it on a classic DVD collection it was a WTF moment and I had to rewind to double-check. Soooo wrong, but funny!

To end things off, we take a look at a ’10 Dirty Jokes Hidden in Your Favorite Kids Cartoons’ clip, which covers quite a lot of really dirty moments over the years in some of our favourite cartoons.

Do you recall encountering any dirty moments watching your favourite cartoons as a kid?

ThunderCats: Will We Ever Get a Movie of the ’80s Animated Series?