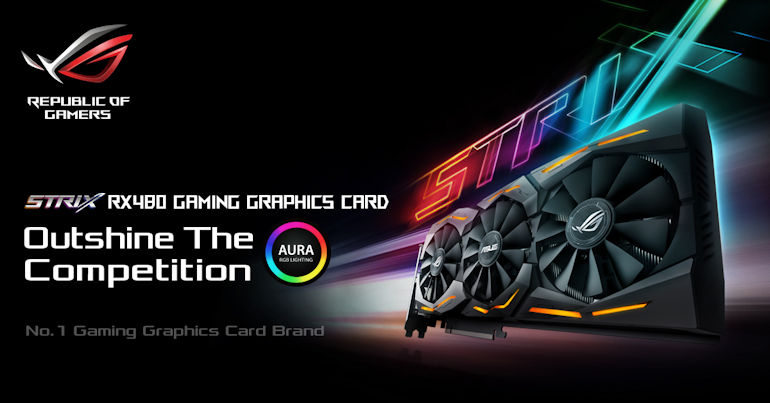 After a relatively subdued couple of months leading into 2016, the GPU market was once again set ablaze by the announcement of a number new graphics cards. The gaming industry was abuzz, and still is, with rumours, leaks, specifications and benchmark comparisons, and a host of other articles and reviews related to the two major players, AMD and Nvidia. And while the battle is fierce between the two graphics processor giants, the battle between custom card manufacturers is also brewing, especially since the availability of non-reference models. Having recently received the Asus ROG Radeon RX480 STRIX OC 8GB for review, we get a view into one such custom build.

AMD’s Radeon RX480 series was released at the end of June 2016, and was the company’s first graphics card to be based on the new Polaris GPU architecture. This new GPU was built using the 14 nanometer FinFET process, and was also the first GPU to be made at GlobalFoundries. When it was announced, the GPU was heralded as the most affordable VR-capable graphics card at $199 for the reference model. Asus’s custom build, however, has taken things further than the ‘basic’ model…much further.

As a tech enthusiast, there aren’t many unboxing opportunities I don’t enjoy, however insignificant the product may be. Over the years, I’ve enjoyed quite a number of them, some with expected results, and some underwhelming, and others quite remarkable. But nothing in comparison to the ROG RX480. The box itself was nothing to behold, but the actual unit was. It’s quite a large and impressive looking card, and once the awe settled enough for me to regather my thoughts, the first thing that came to mind was whether it would fit into my gaming case. If you think you have things covered, perhaps you should get out a ruler or measuring tape to be sure, as this unit is even bigger than AMD’s reference card. The unit measures 298x134x40mm, which is a substantial amount of real estate. The card wasn’t able to fit into my case, and had to get creative in building a temporary setup to accommodate it.

The card has a very discreet look, which, apart from the three fans on the front, you wouldn’t notice much about its look, apart from the ROG logo. Fitted to the back, on right side of the metal backplate is the logo. But this all changes once you’ve successfully connected the card to the motherboard and powered up your PC. Asus has fitted their Aura RGB Lighting to the unit, which enables gaming personalisation, which is controlled by means of the included software. The colours can also be linked directly to the system’s temperature, so you’ll be able to visually see any increases as a result. Many other exclusives have been added by Asus that are controlled by the software, but we’ll touch on these a bit later. Asus has redesigned their cooling system, which includes the DirectCU III Technology with patented Wing-Blade fans, which, according to factory tests, should produce 30% cooler temperatures with 3x quieter performance. I’ll provide more detail on the cooling and temperatures in one of the sections below.

Because of its size, the card requires two slots on the back of your system, which may spill over to another PCIe slot depending on the motherboard. Asus has included a decent amount of display connections on the two slots it requires, which includes two HDMI ports, two DisplayPorts, and a DVI port. On many of Asus’ previous card builds, it included three DPs, but has opted for two HDMI ports on the ROG RX480 STRIX in order to support VR headsets or running a connection to your VR headset and TV simultaneously. I’m not sure how many PCs still require the DVI port, but for completeness, I’d say it’s better to have included it. The specifications for the HDMI and DP are, 2.0b and 1.3 HBR3/1.4 HDR ready, respectively. These enable support for 4K@120Hz, 5K@60Hz, and 8K@60Hz. AMD CrossFire is supported up to 4 cards, and, as is the norm of late, this is done via the PCIe bus, and not via the connectivity CrossFire bridge of old.

With the inclusion of the Asus Aura lighting on the ROG RX480 STRIX, the company has included the Asus Aura colour-tweaking software, as well as the Asus GPUTweak II. While the former handles the colour themes and pulse of the Aura lighting (I’ve already mentioned the link between colour and GPU temperatures), the latter is more essential in that it allows you to view details in real time, while managing the fan speeds, GPU core and memory clock speeds, and voltage adjustments. As you would have no doubt guessed from this card’s name, the software also includes some form of “overclocking.” I use the term liberally here, since it doesn’t give users full license to ramp up the speeds and performance, but rather a much safer form of it. Users can choose between easy and professional modes for their levels of comfort, with the latter including more precise sliders for adjustments.

The Polaris 10 architecture of the ROG RX480 comes with 2300 enabled shaders, 144 texture units and 32 ROPS connected to a 256-bit memory bus with 8GB GDDR5 memory made by Samsung (model number K4G80325FB-HC25). The 14nm chip has 5.7 billion transistors with a die size of 232 mm². But all the specs in the world mean nothing if the performance isn’t there to match.

The results below are the average FPS using the three different resolutions, all running on Ultra High settings:

As I’ve already alluded to in the software section that the overclocking wasn’t fully customisable. OC here is limited to a few presets, and users won’t be able to push the clockspeeds past these predetermined settings, at least not using the included software. There were also a few glitches with the performance when pushing the speeds much further than the first OC setting of 5% increase (1330MHz instead of the default, 1266MHz). Given that the drivers and software are still in its first or second update since the release of the card, I wouldn’t completely write OC off at this stage, but some questions do have to be raised as a result of the testing.

While I wasn’t able to perform any testing with VR equipment, it is worth noting that the card managed to pass the Steam benchmark tests, while my CPU and RAM did not.

The three fans, or blades, fitted to the card, which are turned off during idle mode, and only start with one fan at temperatures above 60°C. Since this is my first review of a graphics card, I wasn’t fully prepared to test the noise levels produced by the fans, especially at higher core temperatures, but I can say that they’re a lot quieter than anything I’ve experienced previously when it comes to the reviews of gaming rigs and laptops. That said, I was able to monitor the performance by means of the software.

It is noticeable that the fans kick in from about 60°C, as mentioned previously, but turn up the speeds from the 65°C mark. This is peculiar, as it seems a bit low, especially since running most games on Ultra High settings at 1080p resolution will easily push the card beyond these temperatures. As a result, when doing an online comparison of the results, it’s worth noting that the noise level, while above average, lags behind many of the other cards, with the Nvidia ranging among the quietest, while lagging behind other custom builds of the RX480. Asus is definitely playing it safe with its cooling, especially given its OC capabilities. The inclusion of the system fan sync with the GPU, the system fans then also tend to kick in at the same time, although this is less of an issue, since they were always running in any case with my default setup.

Idle temperatures averaged 38°C, while load temperatures almost double at 68°C. A quick look at the benchmarks for the reference card, and there are some notable improvements. While the idle temperatures remain the same (as the fans and cooling system has not properly kicked in), load temperatures are down from the reported 80°C. Operating temperatures vary quite drastically under different testing scenarios, having reached a little over 70°C during OC. The cooling system, then, achieving quite impressive results over the reference card, even when using OC. It is also worth pointing out that the temporary setup to accommodate the card may not have been ideal in terms of overall cooling, but the results are good nonetheless.

Power consumption of the ROG RX480 is about 14W on idle, double that of the reference card for the GTX1080. The consumption increased to 34W when using more than just one of the inputs. Gaming performance averaged a draw of around 170W, which peaked at 180W. While power consumption on idle isn’t great, consumption improved when gaming when compared to other cards. There’s a lot to be said about the Asus ROG RX480 STRIX OC 8GB, and not just in the name, which is a mouthful in itself. It’s difficult to draw any sort of concrete conclusions about the unit, especially when there are a number of other factors to cater for, such as cost, size, temperature, overclocking, competition, VR capability, 4K support, and even game compatibility (while it shouldn’t really be an issue in this day and age, there are still some bugs to be ironed out when playing certain games on either of the two main GPUs). And that’s not even considering peripheral characteristics such as system fan integration, lighting, and included software.

This specific unit will set you back in the region of R5,600, which quite a good price over the reference build unit, and quite a lot cheaper than many of the Nvidia cards. That said, the current high-end 10xx series cards will no doubt yield better performances, especially on 4K, but if you’re not to frazzled by 1080p on Ultra High settings, and the most affordable VR-capable card, the ROG RX480 is definitely a really good bet in terms of price and performance.