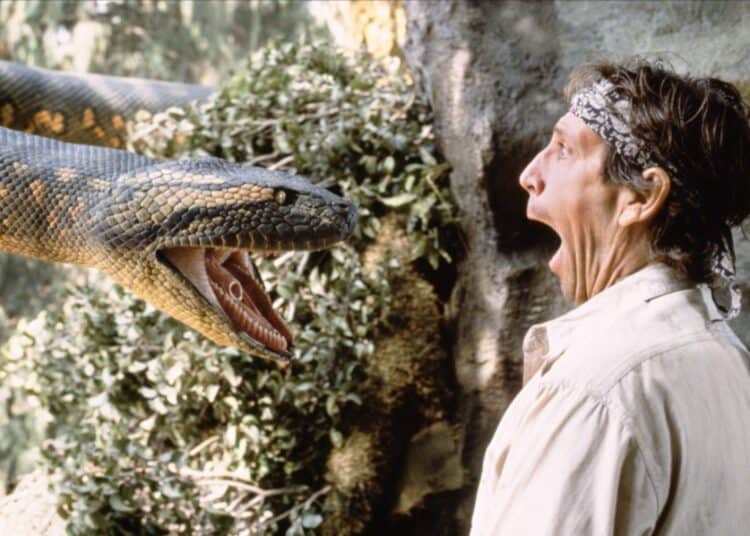 In 2014 e.tv promised its viewers that it wouldn’t air Anaconda again, but the giant snake that’s more slippery than our ministers around accountability hit the screen again in January 2022. But why?

The answer is simple: people watch it. Regardless of how much the Twitter machine complains about the repeats, it seems like the tweets are all smoke and mirrors as the audience can’t resist taking another peek of the serpent stalking Jennifer Lopez and Ice Cube on the Amazon River.

Don’t believe us? Well, sorry for you, because the stats don’t lie. Approximately 2.4 million e.tv viewers tuned in to watch Anaconda on 15 January 2022, as per News24’s report. To put it in context, only 254,000 Americans tuned in to watch the Season 2 debut of Euphoria—arguably one of the most talked-about shows—the next day.

Is Anaconda a comfort movie?

According to psychologist Neel Burton (via Huffpost), nostalgia plays a big part in why people tend to rewatch the same thing over and over or develop an affinity to a movie or show. “Nostalgia can lend us much-needed context, perspective and direction, reminding and reassuring us that our life is not as banal as it may seem,” Burton said. “It also tells us that there have been—and will once again be—meaningful moments and experiences.”

A movie like Anaconda is likely to remind many South Africans watching e.tv of a Sunday evening when they wind down before the start of a new week. It’s the final stretch of the weekend, the last gasp of freedom that they savour. As a result, the silly 1997 horror set in the Amazon rainforest could trigger a part of the brain that comforts you. Who would have thunk it?

When you consider that a movie such as Lake Placid vs. Anaconda exists in this world, Anaconda feels like Jurassic Park in comparison. Sure, the script is about as paper-thin as the current economic recovery plan, but the film features a stellar cast in a unique and confined setting—a hallmark for any horror that strives to create a sense of anxiety and terror. And much like Jurassic Park whenever the first T-Rex shows up, you know the beats of the movie and the moments when the snake will strike, but you still can’t help but get caught up in the thrill of it every single time.

Basically, Anaconda is the cinematic equivalent of an amusement park ride. No matter how many times you experience it or memorise the twists and turns, you’ll always have a good time and ask to go on it again.

Look, programming specialists make decisions based on audience stats. If e.tv airs Anaconda 19 times and it still pulls in over two million viewers, who stick around for most of the movie, it proves that the film is popular beyond belief. There’s no way that they can ignore those numbers because a few people (who secretly watch it anyway) complain about the screening.

Maybe it’s time that we all accept Anaconda is South Africa’s favourite movie.

Tell us, do you still watch Anaconda? Let us know in the comments section down below.